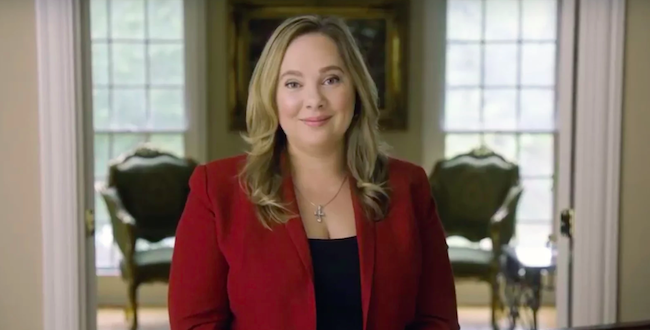 Sarah Riggs Amico is running for U.S. Senate in 2020 from Georgia. Courtesy photo

Democrat launches a campaign that’s all about faith

” Mixtures of religion and politics arent exactly unusual in Georgia, a state situated squarely in the heart of the Bible Belt where asking someone where they go to church is a common icebreaker.

But this year, no one is combining faith ” however broadly defined ” and politics as acutely as Sarah Riggs Amico, 40, a newly announced Democratic candidate for U.S. Senate, running to oppose incumbent Republican Sen. David Perdue.

Amico, who lost a 2018 campaign for lieutenant governor, launched her campaign in August with a video that made a direct appeal to religious voters in the state.

These are times that test our faith, in our beliefs, in our democracy, in each other, Riggs says as footage rolls of faith leaders protesting in Charlottesville, Emanuel AME Church in Charleston, South Carolina, and crowds at a Trump rally chanting send her back.

She continues: My faith teaches that the testing of our beliefs is hard. But it can ground us with purpose.

You dont love the neighbor, if you shun the poor, the powerless, the least of these, she says over images of immigrants in detention centers. Faith is how I know that nobody should be sick because theyre poor, or poor because theyre sick. That we need to protect and sustain the earth. That we have an obligation to stand up for economic security and social justice no matter the color of your skin or who you love.

The ad goes on to refer to Scripture several times while outlining a decidedly liberal vision for Georgia that showcases implicit support for immigrants, the environment, abortion rights, people of color, and same-sex marriage. The inclusive message is juxtaposed against what she argues are the moral failings of the Trump administration.

Centering her left-leaning political message on faith is a bold strategy that experts say is not only attracting accolades from liberals and conservatives alike, but also hinting at a new faith-fueled trend among Democrats running for office in the Deep South.

Im a firm believer in the separation of church and state, but if youre going to bring your faith to the forefront, I think we need to remember who Christ was, Amico told Religion News Service in a recent interview.

This was a brown-skinned Jewish refugee and a wrongly convicted death-row inmate who told people to give away their possessions and help the poor and ministered specifically to the marginalized bringing people together, not ripping them apart.

The ad has garnered accolades from religious progressives such as Jonathan Wilson-Hartgrove, a prominent liberal preacher and regular on MSNBC, and Guthrie Graves-Fitzsimmons, who runs the left-leaning religious newsletter The Resistance Prays.

This might be the most inspiring political video Ive ever seen, Graves-Fitzsimmons tweeted.

Amico, who later penned a devotional for The Resistance Prays, insists the ad arises from a faith that has long been important to her. She grew up a United Methodist and now attends North Metro Church, a nondenominational congregation in Marietta, Georgia. Her excitement was evident when she was asked to list her favorite Bible verses, pointing to the call to help the least of these in the Gospel of Matthews 25th chapter and the description of the sufficiency of Christ in the Epistle to the Colossians.

But it is the Letter of James that has stuck with Amico most recently, where religion is described as to care for orphans and widows in their distress, and to keep oneself unstained by the world.

There are a lot of ways to read that, but they include not allowing injustice to become normalized simply because it exists, she said. I think that speaks directly to this political moment. Were in this world, but were not of it. That means a clear declaration of right and wrong and not letting families in cages or people without health insurance in the wealthiest country in the world become normal.

Like many Democrats, Amico is careful to note that her embrace of religion is not a call for others to do the same. She noted that her husband is an atheist and that her bigger concern is calling out basic right and wrong.

Even so, her embrace of religion struck University of Georgia political science professor Charles Bullock as unusual.

I have not seen ads quite like this from either side, he said.

He argued there was a clear electoral logic to Amicos approach. A disproportionate percentage of Georgia Democrats are African American, a demographic that also exhibits high levels of church attendance.

Whats more, Bullock argued that should Amico emerge victorious from the Democratic primary, her faith-rooted message ” while navigated carefully among younger, less religious voters ” has the potential to generate crossover appeal in a state where roughly 9 in ten residents claim some form of Christian identity, according to Pew Research.

Its not going to turn off many Democrats and might win over some Republicans, he said.

Amico said she has already noticed bipartisan support for her campaigns launch ad.

On the one hand weve gotten a lot of the sort of what I would call the religious left theyve been very warm in their response, she said. But what I thought was fascinating was Eric Erickson, a very right-wing talk radio host, did an eight-minute segment on the video (on his show) where he played it in its entirety for his audience and was complimentary.

But Amicos appeal to faith, while currently geared toward Democratic primary voters, may find it has the greatest influence with the states most sought-after swing voters: white women.

Here youve got a white woman making this pitch, which may allow her to peel off some other white women who ” perhaps as they apply their faith to politics, and are offended by things the president has said and done ” may find affinity with Amico, Bullock said.

Amico is not the first Georgia Democrat to lean on faith in recent years. Stacey Abrams, a rising star in the Democratic Party who Amico campaigned alongside last year, also released an official campaign video while running for governor in 2018 arguing that Jesus Christ was a progressive.

Its a strategic approach in a state analysts argue could become a battleground in future election cycles, and one that stands to be a common theme among the increasingly crowded Democratic field vying for the Georgia Senate seat.

But Amico, a businesswoman who describes herself as a newcomer to politics, insisted that the political calculous wasnt the primary concern when crafting the ad or her campaign message.

I would be running the same ad if I were running in Alaska or Idaho or Washington or Hawaii or New York, she said. It was more about heres how I see the world, heres a filter that helps me think about the right and wrong way to treat other people. And here is where I think our leaders have failed us, and specifically David Perdue and the GOP-led U.S. Senate.

Visit My Website
View All Posts
Previous The key to restoration is embracing, not forgetting, the past
Next Ask An Eastern Orthodox Christian: Prayer Rope