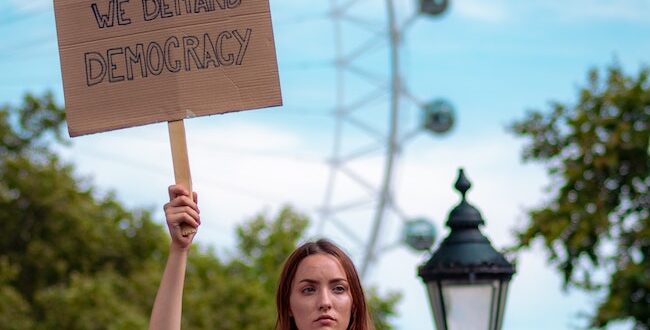 Photo by Fred Moon on Unsplash

Democracy in Ukraine and in U.S.

Democracy in Ukraine and in U.S.

“Standing for Democracy: In Ukraine and at Home” will be the subject of the next FāVS Coffee Talk, Saturday, 10 a.m., at the FāVS Center, 5115 S. Freya. The event also will be available to attend via Zoom.

Sometime in the next few days, weeks perhaps, democracy will die in Ukraine.

Russian forces — and I nearly wrote Soviet forces here — will take the Ukrainian capital of Kyiv and install a puppet government sending the democratically elected government into exile, at best, into oblivion at worst.

It is an almost unbearable tragedy and likely unstoppable. As much as the United States and its European allies can do within the limits of sanctions and equipment support, there is no desire in this country, at least, to put boots on the ground.

Absent direct military intervention or a totally unexpected change in Russian strategy, it is likely that nation’s overwhelming military superiority will prevail but with enormous loss of life on both sides.

This is a war long in the making. Ukraine was a Russian puppet state up to the Soviet collapse. Through much of the 20th Century, the Soviet Union viewed Ukraine as an essential buffer against aggression from the West, particularly Germany.

When Ukraine spun out of the Russian orbit after the Soviet collapse, proponents of Russian empire worked to bring it back into the fold. They have been particularly terrified of Ukraine’s steady move toward the west, particularly toward NATO.

As a result, Ukrainian politics have been a jumble this century, with Ukrainian nationalists and ethnic Russians struggling for power.

I was in Kyiv just weeks after the so-called Orange Revolution, a popular uprising that led to the 2005 election of a pro-West president, Viktor Yushchenko.

The massive popular protests had diminished in size, but Yushchenko supporters continued to gather daily not far from our hotel, waving orange flags and making speeches.

When my colleague and I arrived in the southern city of Kherson, sentiments were more mixed. The ethnic Russians in the Ukrainian south, where the population is more evenly divided, tended to support the country’s pro-Russian factions.

There is not enough space here to recount the political disruptions that followed Yushchenko’s election. It is enough to note Ukrainian nationalist and pro-Russian factions frequently traded power from 2004 through 2018. The 2019 presidential election, widely viewed as the fairest, most democratic election in Ukraine’s history, saw pro-West candidate Volodymyr Zelenskyy win office with nearly 73% of the vote.

His election served to be the final provocation for Russian President Vladimir Putin, inevitably leading to the present tragedy.

Trump and his most ardent supporters are Putin admirers. Trump has called the Russian president a genius for his Ukrainian maneuvers. The former president’s attacks on Zelenskyy in 2020 invigorated the pro-Russian nationalists. Trump backers at recent rallies and far-right meetings have cheered the Russian president. Republicans in Congress have been careful in their denunciations.

The fight for democracy in Ukraine is now an all-out war. Guns. Tanks. Bombs. Missiles. Terrible civilian casualties and urban fighting that takes a terrible toll on both armies.

The fight for democracy in the United States is fractious, but relatively peaceful – for now.

Trump still insists he won the 2020 election and that he was deprived of victory by massive fraud. A large majority of Republicans believe that to be true despite incontrovertible evidence to the contrary. His deranged advocates include Virginia Thomas, wife of Supreme Court Justice Clarence Thomas, who has accepted as fact the most outrageous conspiracy theories as noted in this Poynter fact check.

Trump failed in his efforts to steal the election because local Republican officials in several swing states — Michigan, Pennsylvania, Arizona, and Georgia — refused to be intimidated.

The party, now firmly under Trump’s control, paid attention to that outcome and has since worked tirelessly to undermine election integrity in those and other states. Election efforts this cycle have focused on local and state races, particularly those for secretary of state positions, going directly at the officials most responsible for running state elections.

And those efforts have the backing of Trump’s handpicked Supreme Court majority which has largely upheld Republican reapportionment schemes designed to ensure party victories in the coming elections.

The deck is being stacked, has been stacked with the goal of returning Trump to power even if he fails to win the 2024 election.

So, one of our major political parties is working to undermine our own democratic systems to ensure an authoritarian takeover.

This is the battle for democracy in the United States.

To decry Russian aggression in Ukraine while supporting the domestic Republican agenda is dangerous hypocrisy.

If we want democracy to win in Ukraine, we must also wage our own fight to preserve it at home.

View All Posts
Previous Earth is our only country. Can we make it peaceful?
Next Study Investigates Why Donors Prefer Giving Time Over Money