I have been working with refugees since October of 2006, when our family agreed to host a family of five Karen refugees from Burma through World Relief, an international refugee resettlement organization with a great office in Spokane.

These were the first Karen people to come to Spokane and because of that we worked to move them right around the corner from our house. We hosted the next two families as well and then began partnering with World Relief in building a small community of Karen people here in East Central. That first year I was exposed to the opportunities and challenges refugees face.

Through my friendships with these people I began to see my faith, church and city in a new light. Some of that was so encouraging, and a lot was discouraging.

I quickly became aware of the underlying racism that was present in our community, something I hadn't experienced since most of my relationships were with fellow middle-class white people. I saw discrimination and witnessed the powerlessness of the poor and marginalized. I've seen the vulnerability and the victimization of those who do not understand our American life. I've helped them deal with shady employers who work them overtime without pay, salesmen trying to scam them, navigating schools systems, medical providers, an unsympathetic legal system and countless other challenges these new arrivals face in Spokane. But, I think one of the most frustrating spheres of life we deal with is the medical system. The poor, elderly, disabled and refugee community face discrimination and lack of access and service in ways that often infuriate me and break my heart.

Lack of information for low-English speaking people is part of the problem. The culture of liability, paper overload, disconnected systems, for-profit business and a sprawled out city that places access to medical services out of reach of many people are at the root of a lot of needless suffering. I know people who have done their own dental work, suffered with chronic health problems from lack of quality care, been denied treatment and died because of the way our systems dehumanize, isolate and put profit before people. 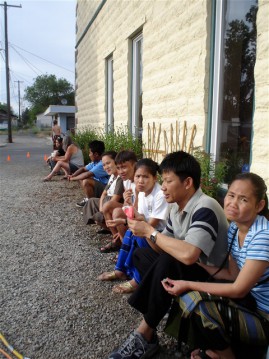 Last week I received a call from an Iraqi refugee friend. He's an elderly man with heart problems and high blood pressure, poor English skills and suffers partial paralysis from a stroke. He came to America as the only other option than returning to bombed-out Baghdad where he faced danger due to the political and ethnic changes in Iraq. He went from a good and prosperous life, with a beautiful home and extended family and friends to a refugee camp and then to a two-bedroom apartment in Spokane. The changes and challenges he has faced in hopes of providing a better future for his two teenage children has been both heartbreaking and inspiring to me.

He called me in a panic because his nose had been bleeding for two hours and it wasn't stopping. He asked if I would come and help him. When I got to his house, he was dressed in sweats and had blood down the front of his shirt, on his head and was clutching a blood-soaked rag to his face. He was visibly scared and asked me to take him to the urgency care center where he had taken his daughter when she was sick. I took him there and was turned away because he didn't have the type of insurance that covered their services. The woman at the desk advised us to go up to 57th and Regal to another urgent care she said took his state insurance.

At the next office I started filling out forms and then I was told that they wouldn't see him either because he had to have a referral from his primary doctor. I argued with the staff with him on my arm, still bleeding and confused as to why I couldn't seem to get him help. I was informed that I could just call 911 if I had a problem with the situation. We left. My friend's nose had stopped bleeding, so as I drove him to the emergency room and called his primary doctor's office. I had to argue a bit with someone to get a nurse on the phone to discuss what I should do. Finally I got some advice on the situation. She gave us some guidance and said if he continued to have any episodes of bleeding that day to take him across town to their urgent care. I took him home and helped him take his blood pressure and then we prayed together. As I reflect on this situation, which isn't an uncommon type of experience in this town, I was deeply frustrated about how the care of people in our communities has become such a politicized issue.

While people argue and debate about profits and policies, people suffer. One nurse told me about the policies and the fear of being fined by the state if they provided services. But not once did any staff or nurse offer a clean and sanitary rag. All we got was cold, clinical care. No compassion; or action, just dead-end procedures. I was ashamed of our system. We can argue about the debt, freedoms, liability and host of other reasons why things are as they are, but when you are standing there in an office with an old bleeding man in sweats clutching your arm and you are denied service, the problem becomes personal; more than political. The dehumanization of the individual in our culture is chronic and at the root of much of it is the love of money.

I hope young and emerging medical professionals will catch a vision for returning to urban centers to practice medicine among the poor, the elderly, the marginalized and the disabled. Our neighborhoods need doctors and access to medical services. Until we rethink the way we are living life as a community these types of ridiculous experiences will increase.