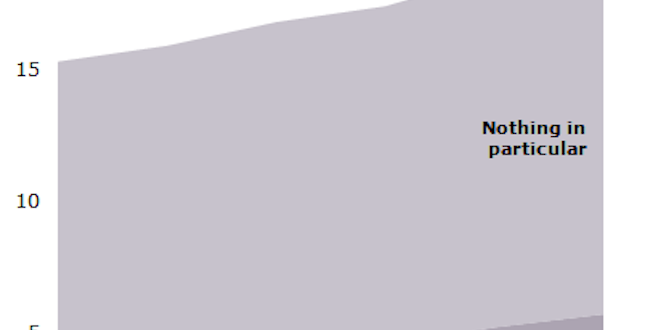 The American holiday season is known for lots of food, pretty lights, and crazy family members. Like many Midwesterners, I expect my family gatherings to include discussions of football and those goats my aunt and uncle plan to purchase. My family is scattered across rural Iowa —the closest mosque or any sort of spiritual gathering outside Christianity is more than an hour and a half from them by car. Needless to say, the likelihood of a religious discussion outside of Protestant Christian theology to be had is slim to none.

Much to my surprise, I found myself on the flip side of these odds.  I was discussing religion, explaining a variety of religions, and explained my personal beliefs. I answered many questions revolving around religion, spirituality, my faith or lack thereof, and how I came to this conclusion. The most surprising part: my family was listening.

My uncle asked questions of the New Testament and how to view its parables and the morality infused with our culture. Then I heard something that struck a cord. My aunt said, “I know there is a god out there, a Christian god, but I do not feel the need to attend church services to be the type of Christian I want to be. Is that so wrong?”

That is when it hit me. This is the ultimate question. This is not a question that exclusively millennials are asking, but Americans as a whole: “Is religion defined by its organization?”

The question my aunt asked goes back to colonial America. It is dated in the philosophy of established religion and the American idealism that it created. In some ways, we are still asking it, or perhaps, we are asking it again.

My aunt is questioning her religious identity in regards to her religious practices and personal spirituality. Inadvertently, she is making a distinction between the two. She begs the question, is a religion defined by church attendance or prayer? Does participating in Christianity need to be political or organized to obtain the same spirituality the participator is looking for? Or can religion be more or less? My aunt wants to know if her religion is defined by an above hierarchical power or within.

My aunt is not the first to question this. In fact, most Americans are asking themselves these questions. Scholars, academics, religious leaders, non-religious leaders, and tradition are all sitting on the edge of their seats wondering if religion is the same as it once was or if it has changed.

This past fall, I found myself at the Baylor Institute in Washington, DC. I listened as some of the most recognized religion academics in the United States argued “Religion is not dead, but rather, it is adjusting.”  I listened as they threw out facts like Christianity and Islam being the top two growing religions in the world. Or most Americans pray, believe in a higher being, or believe in a heaven. 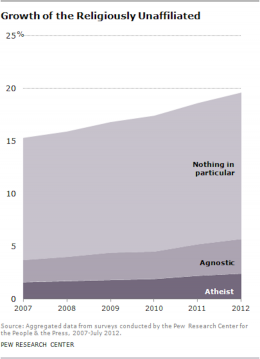 It was extremely appropriate as a few days previous the Pew Research Center reported precisely 22 percent of Americans are not religious. Their argument is the exact opposite, that Americans are becoming more secular.

As I was about to ask a question, Conrad Hackett of the Pew Research Center beat me to it. As his hand went up, I knew the conversation was about to grow.

Conrad argued secularism is not exclusively atheist and/or agnosticism, but it is not identifying with a religion(s). It is more or less than the tradition that which a book, religious leader, or a deity asks of you. Secularism is more than a rejection or disbelief, it perhaps more complex and complicated- it is pluralistic in nature. Secularism is belief, lack of belief, and partial activism. It is the AND. It is the belief plus something else.

In an essence, it is American pluralism. It is the rejection of established religion and a creation of private organized religion.

It is here that I realized both of these scholars are discussing a similar phenomenon.   Pluralism.  Pluralism in the United States is growing, has been growing, and has uniquely transformed through a rejection of established religion and authority. Americans do not care to attend Church, but still believe in its theological endowment.

Autonomy is founded in every day American values. Americans value the ability to make a decision for themselves, by themselves, and without projecting it to the world unless they wish to. This idea of autonomy is unique compared to Europe’s all or nothing approach to organized religion.

I listened as these scholars argued approximately the same thing. They argued over a new movement, but then how could they have some differing viewpoints? How can these scholars with brilliant and impressive scholarly backgrounds, come to a simultaneously similar and yet opposing conclusions.

The answer to this question is that there is no clear definition. Both arguments are discussing a newly unique phenomenon, which has yet to be defined. One cannot discuss and support a well-constructed argument if the idea is arbitrary.

Religion as a whole is indefinite. It is similar to the word interesting. Depending on the intonation used, interesting could have a wealth of meanings.  Religion has become more than attending church. It is more than an identity anymore. It transcends nationality, groups, and personal reflection.

Both of these parties understand religious groups need to adjust their religious perspectives for this new movement and/or phenomenon. They must offer more theology; it must offer a modern set of being. It is political and simultaneously, not. It is similar to a culture and yet lacking it.

The Baylor Institute and the Pew Research Center understand this, but their classification differs, mostly because there is not one. Before, we defined religion as organized. Therefore, if it is not organized, it must be the other—secularism.

In the eyes of the organized religious or those that are religious, they desire to be included in the spiritual group, but do not fall under the umbrella of a rejection or religion or disbelief.

The question becomes, what are they? Who are they? How does this look? And why us, why now?

Until we can answer these questions, we cannot define secularism… or religion. Defining religion gives us the definition of secularity and vice versa. Perhaps in defining the two, we will create a definition of this newly invented movement.

Many may be asking the question of so what? What is the purpose of defining religion and secularism? Religion defines everything we do. American culture, American politics, American values, and American gathering, etc. The United States cannot be a culture of one unless the religious or non-religious majorities are clearly defined and known. Until then, our ability to identify is unclear. Unclear identity relinquishes uncertainty and uncertainty relinquishes tension, stereotypes, and perhaps violence.

A clear investigation of our religious, non-religious, and middle-of-the-road religious and non-religious history will allow us to see the potential of our identity and a look into our future.

Previous Upcoming exhibit at Whitworth- Gala Bent: Everything Seems to Be Coming Together
Next NFL violence and high school prayers OK with fans