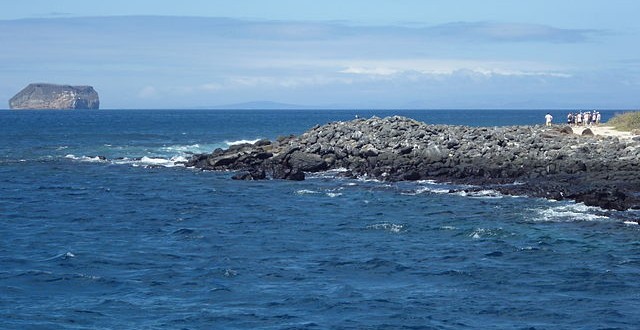 North Seymour Island in the Galapagos about to land on shore, Daphne Island is in the distance/Wikipedia photo by David Adam Kess

Deeper Than a Theological Travelogue Part I

How does one write about his theological observations while on a trip to such amazing, yet disparate places as the Galapagos Islands of Ecuador and the Inka Valley and Machu Picchu of Peru without presenting a Rick Stevenish travelogue? Recently formed very isolated equatorial volcanic islands teaming with trusting wildlife and cities and agricultural terraces made of intricately placed stone blocks weighing often 30 ton atop very rugged mountain peaks high in the Andes all give us metaphors for God. My answer, of course, is to see God in the development of the species, their relationships of trust, and in the socio ethical relationships of the Inka. I must see God in the movement of life through the islands and the mountains: our relationships in the world. And, since the garden we are to tend is not all peace and dulce, to see God and evil in the Spanish conquistadors, their cultural relationships, and our idolatrous exploitation of these relationships.

My recent trip suggests to me two sets of observations about a contemporary theology based on our scientific cosmology, which fits much more the natural, non-supernatural view of religious thought that we can use to form more productive, less destructive images of the contemporary spiritual and ethical life we had better engage, the Solar shining out of our natural energies in positive relations with the world and each other. First, we have a view of The Peaceable Kingdom in Galapagos, so central to Jesus’ thought, and the thinking of other leaders of faith. And secondly, we see how this kingdom could have been but wasn’t realized in the contact of Inka with the European, Christian conquistadores. First, the vision, secondly, how we need to work out this vision in our relationships with other people and societies.

I shall first describe the force and order of God that I found in the Galapagos, and the ethical and theological implications I see. Then, in a later posting, I shall describe these in terms of the Inka and their culture, contrasting it with the dominant and domineering Christian culture that , in my opinion did at the time of colonialization then and now, cause so much evil: out and out pain and degradation, the end of civilization. Needlessly.

The Galapagos Islands are usually presented as a case study of two phenomenon – the development of new species through natural selection, and the lack in the wildlife of feelings of fear or defensiveness when approached by humans, be they predatory or simply curious. In these two sets of events we can draw suppositions about the nature of God.

First, we once believed that God created the world and its creatures as relatively unchanging, solid, as is, an idea we can no longer hold given the facts. For instance, what arrived on the islands eons ago, one species of finches, has evolved into several different species. Each island has a different set of physical characteristics, producing different food sources for its inhabitants. One island may have fruit with soft seeds, easy to break, but maybe buried deep in pockets. Finches with longer but less muscular beaks would have better access to the seeds than those who are thick billed with muscular jaws. But the latter finches would survive more easily on an island whose major food supply was hard seeds that fell to the ground. If that is not amazing enough, the change of the bills of the descendants of one species of finches from thick to long has been observed as happening in just a couple of generations. Change the environmental conditions and survival characteristics may change in the genetic inheritance patterns of that species at that location. Often the group of newly beaked birds will not and cannot breed with the unchanged group, so we must say a new species of finch has been born. (For a thorough discussion of all this, covering recent research, see Jonathan Weiner’s “The Beak of the Finch.”) The same process can be seen in the development of different species of giant Galapagos tortoise, each species pertaining to a separate island, each with a different shaped shell. Some, who feed close to the ground, have rather flat openings for their neck. Others, coming from Islands with food higher off the ground in the branches of bush have upper shells with an oblong opening, with the collar with an opening protruding much higher at the back of the neck. Each group reproduces true to its genes, thereby constituting a different species.

Darwin did not see these patterns. He, at most, suspected that species developed according to their ability to survive and reproduce in specific environments. Others formulated various theories of how that happened, each scientist using slightly different sets of data. Some coined the phrase “survival of the fittest or stronger.” Darwin did deny that term, saying that what was operative was not strength, but “the survival of the most adaptable.” We better heed that distinction – power has little to do with survival, but ability to change to fit the contingencies of our age is everything. For me, this flexibility is an ethical necessity if we value life force. Here we start developing metaphors of meaning that fit both our natural observations and the need to let the evolutionary force of life, in ourselves and other forms, shine out, a solar religious mythos rather than the traditional Old Testament mythos of following God’s unchanging laws and hierarchies.

When one moves from the physical characteristics of beaks and shells to the characteristics needed for interpersonal relationships, this ethical dimension is most evident. Here I take as the foundation of ethics the need for respect of life and an equalitarianism among entities. I was standing on a small beach in Darwin Bay on the small, restricted island of Genovesa about three feet from a sea lion mom and her suckling calf, getting a close-up picture when we were distracted by four six or eight year old human children splashing each other in the light surf, not five yards away. The sea lion pup gave a bark of delight and padded its way to the four kids. The mom opened one eye to check out the scene, then went back to contentedly napping. One human splashed the pup in the face. She sputtered and splashed back. All joined in the game, a boisterous free for all. The pup was in her element, and obviously had the advantage of agility and a bigger fin. All were laughing and tumbling over each other. Soon the pup tired of that game and wandered back to her mother. I would not have been surprised if a couple of the human children had joined the pup for a light snack. I was once given a cow’s tit, and I’ve seen babies suckling from a milk goat. Funny.

With little to fear from humans, now that we have stopped eating them, the animals on the islands are very accepting of close, often intimate contact. I came upon a nesting red footed boobie in the middle of the narrow path, a ridiculous looking ball of white fuzz with beseeching eyes and a stubby beak. It gave a mellow squawk to let me know it was there, then observed me as I stepped over it I squawked back, and it fluffed its fledgling wings and settled back down seeming to be disgusted that I didn’t have any predigested fish to regurgitate into its opened mouth. The only conflict I had with any of the fauna came from an aged grandpa land iguana that got on the path in front of me, insisting on taking his own time. He did pause, looked back at me as if to say “Age before beauty.”

The force set into motion when God gave the word to chaos, evolution, seems to have led to a Peaceable Kingdom. Short of occasional resurgence of a chaotic event, the peaceful relationships were left to develop. Probably some pain is caused by the need to adapt to new conditions, such as el ninos that can interfere with the plentitude of food and shelter. Some die, some starve, But all –in-all, the animals who can adapt to a life giving God will help their species adapt to life.

But we humans have trouble accepting that gift. We are aware of our future – death – and being thereby full of anxiety at the threat of our non-being, establish many idols which we hope will shield us form that threat. Too bad, simple prayers and celebrations don’t seem to reduce that anxiety. So we must need more and more powerful idols, and more sacrifices to be made to them so they will save us from a fall. We greedily collect sacrifices; more, more until the relatively balanced distribution caused by evolution is disrupted. 1% comes to control 70% of the welfare. We have to respond with power, get, get, get, rather than adapt and share space and life and wealth.

And in the Galapagos, that imbalance was not much in evidence. It could become so, if we are not responsible and careful. But with respect, empathy for other beings, and mutual sharing of resources and joy, we will shine.

I saw the contrast between the way of Pharaoh and the way of YHWH in the Valley of the Inka. Next time, what kind of god let 157 Christian Europeans conquer the 10,000 person army of a peace loving nation?