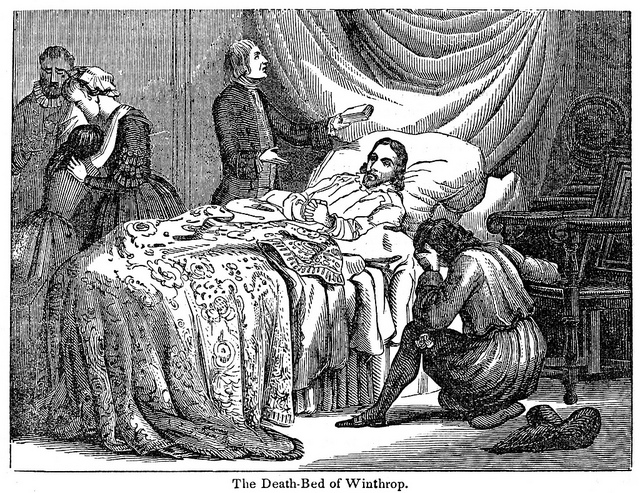 "The Deathbed of Winthrop" (public domain)

Deathbed conversions: Too much too late?

You might be surprised to learn that, as a Jew, I listen periodically to Moody Radio. I do so in part because I’ve long been fascinated by conservative Christian religion and politics. I also listen because I believe in trying to understand the culture that surrounds you, especially if it’s very different from your own. I work as a therapist with local families — many of whom are Christian, some of whom may well listen to Moody. I think it helps me empathize if I have a sense of where they may be coming from, spiritually and ideologically.

A few months ago I heard an interview on Moody with a middle-aged man who converted from Judaism to Christianity after marrying his wife, who was raised Christian. The man was talking about a surprising event in the life of his 90-something father, a lifelong Jew. As the nonagenarian lay dying, his daughter-in-law talked with him about Jesus. Suddenly, according to the middle-aged man, his father had accepted Christ into his heart! And not a moment too soon, either: Host and interviewee agreed that this turn of events changed the nature of the old man’s ultimate destination (Read: His ticket to heaven had just been punched).

Because my grandparents were Holocaust survivors, I should be particularly offended by this story. For a religious minority to be “encouraged” to switch teams on his deathbed, when he is arguably at his most vulnerable, might seem ethically questionable on its own. When you consider how many Jews died in World War II because they refused to undergo forced conversion, the deathbed conversion of a Jew to Christianity can take on even less pleasant overtones. Such 11th-hour switcheroos can seem to trivialize the sacrifices of those who died instead of compromising their Judaism. Did they really have to die, one might (unwisely) wonder, if becoming Christian was that easy?

According to Erik Erikson’s psychosocial theory of human development, integrity is key to the final stage of life. If you believed your life had meaning, Erikson thought, you could reduce your existential despair as the end drew near. I can’t dismiss the possibility that a moribund Jew could find sincere faith in Christ with a little help from his daughter-in-law. But I also worry that even a loving agenda on the part of the proselytizer could undermine the integrity of the dying man’s life.

After finding Christ, the old man soon expired — his  despair, existential or otherwise, was at an end. But what of the Jewish-identified relatives who survived him? Might they not experience heartache at the news that their patriarch had made a last-minute theological U-turn? I would be a hypocrite to scold people for their religious wanderings — my own Jewish identity, Buddhist leanings, and Lutheran church life don’t fit in a simple box. Still, I wonder what people of various faith backgrounds think about deathbed conversions. Has anyone close to you experienced one? If so, what was that like for them? For you?

Previous How are you willing to help SpokaneFAVS?
Next Good Friday Service