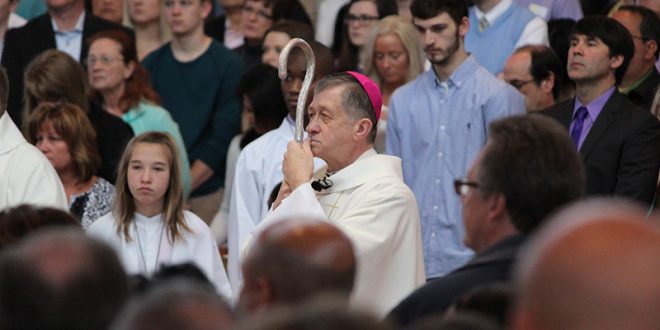 (RNS) Chicago Archbishop Blase Cupich has decried the apparent targeting of gays and lesbians in the Orlando nightclub massacre and called for greater efforts on gun control, the first senior U.S. Catholic churchman to identify a reason the victims were singled out and raise the controversial issue of access to weapons.

“Our prayers and hearts are with the victims of the mass shooting in Orlando, their families and our gay and lesbian brothers and sisters,” Cupich said in a statement issued Sunday afternoon (June 12).

Cupich also sent a letter that was read at the Sunday evening Mass sponsored by the archdiocesan LGBT ministry assuring them that “the Archdiocese of Chicago stands with you. I stand with you.”

“Let our shared grief and our common faith in Jesus, who called the persecuted blessed, unite us so that hatred and intolerance are not allowed to flourish, so that those who suffer mental illness know the support of a compassionate society, so that we find the courage to face forthrightly the falsehood that weapons of combat belong anywhere in the civilian population,” Cupich wrote.

His comments came as details emerged about the early morning attack on a gay nightclub by a Florida man — a Muslim who pledged loyalty to the extremist Islamic State group — that left 50 dead and more than 50 injured.

It was the largest shooting rampage in modern American history and the worst terror attack since the Sept. 11 attacks in 2001.

Cupich, whose city faces a scourge of gun violence, also raised the issue of gun control in his statement as he did in the letter to the gay ministry.

After Memorial Day, the number of people shot this year in Chicago was at about 1,500 — up more than 50 percent over last year, according to the Chicago Tribune. Of those, at least 250 had been killed.

The attacker in Orlando, Omar Mateen, 29, who was killed in a shootout at the club with police, recently bought a handgun and an AR-15-style assault rifle, the type of weapon commonly used in mass shootings.

“The people of the Archdiocese of Chicago stand with the victims and their loved ones, and reaffirm our commitment, with Pope Francis, to address the causes of such tragedy, including easy access to deadly weapons,” Cupich said. “We can no longer stand by and do nothing.”

Earlier Sunday, the Vatican released a statement saying that the attack prompted “the deepest feelings of horror and condemnation, of pain and turmoil” in the pope, who called for prayers for the victims and their families.

The statement did not mention the sexual identity of the victims or the mass marketing of weapons — a topic the pontiff raised in his historic address to Congress last September.

The Vatican statement Sunday did say that Francis hopes “that ways may be found, as soon as possible, to effectively identify and contrast the causes of such terrible and absurd violence which so deeply upsets the desire for peace of the American people and of the whole of humanity.”

Cupich has been one of the few U.S. prelates to speak out against gun violence and for gun control, but his mention of the sexual orientation of the victims in the attack at a gay nightclub was unusual as well.

Many Catholic leaders expressed their grief and horror at the massacre, and called for prayers.

But it was rare to find any mention either of the gunman’s apparent motive or the fact that gays and lesbians were targeted.

Indeed, even using the terms “gays and lesbians” is notable, as churchmen tend to prefer the term “homosexuals” or to speak of people with a “same-sex attraction.”

The head of the Orlando diocese, Bishop John Noonan, late Sunday afternoon called for a prayer vigil for Monday evening (June 13) but made no mention of the fact that the attacker targeted a gay nightclub.

Noonan lamented the “massive assault on the dignity of human life” and said prayers had been offered for “victims of violence and acts of terror … for their families and friends … and all those affected by such acts against God’s love.”

Archbishop Thomas Wenski of Miami also did not mention the sexual orientation of many of the victims but in his statement said: “Hatred blinded the conscience of the perpetrator of these horrible acts, acts no one must be allowed to excuse or justify. The survival of civilization demands zero tolerance towards such acts of barbarism. Hate-inspired terrorism is still a clear and present danger in our world.”

Pittsburgh Bishop David Zubik warned late Sunday against “taking out our grief or anger on any group of people” and added:

“Our Muslim neighbors are grieving over this tragedy as much as our gay and lesbian neighbors. We are all God’s children. May we love, honor and respect one another as such.”

A brief statement from the president of the U.S. Conference of Catholic Bishops, Louisville Archbishop Joseph Kurtz, bemoaned the “unspeakable violence,” called for prayers and “ever greater resolve in protecting the life and dignity of every person.”

That statement contrasted with Kurtz’s statement a year ago after the shooting massacre in a black church in Charleston, S.C. Speaking two days after the attack on Mother Emanuel by a white supremacist, Kurtz repeatedly condemned the “racism and the violence so visible today” and called for efforts to combat both, in personal change and through public policies.

It remains to be seen if Catholic leaders will become more specific in their comments in the coming days. The American hierarchy is currently gathering in California for a closed-door retreat that is expected to last several days.

Indeed, Bishop Robert Lynch of the Diocese of St. Petersburg on Monday wrote a blog post expanding on his initial reaction.

In that column, he called for banning assault weapons, saying it was a “pro-life” issue, and he warned against using the tragedy to ramp up prejudice against Muslims.

But he also said that “it is religion, including our own, which targets, mostly verbally, and also often breeds contempt for gays, lesbians and transgender people.”

“Attacks today on LGBT men and women often plant the seed of contempt, then hatred, which can ultimately lead to violence,” Lynch wrote, saying the victims “were all made in the image and likeness of God. We teach that. We should believe that. We must stand for that.”

Other Catholics have not been hesitant to note the elephant in the room, as it were.

The Rev. James Martin, a Jesuit priest and popular writer, tweeted early Sunday afternoon that while he was not sure about the gunman’s motivations, “church leaders must speak out against hatred and violence directed against LGBT people.”