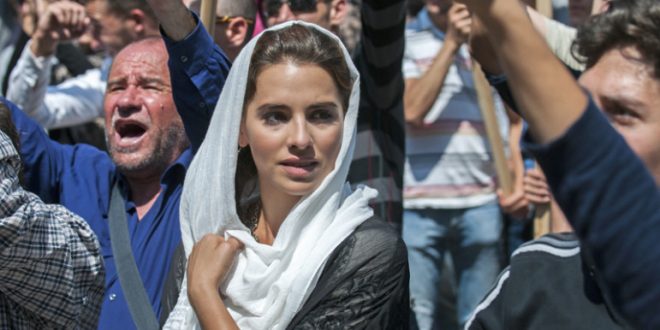 Melia Kreiling as Daliyah in "Tyrant" on FX. Photo courtesy of Kata Vermes/FX

(RNS) As part of his “Islam in Film” class at the University of Nebraska, religious studies professor Kristian Petersen screens movies such as “The Hurt Locker” (2008), “Argo” (2012) and “American Sniper” (2014) to make the point that depictions of Muslims on the big screen often involve a conflict narrative.

Muslim characters are either terrorists or “good” Muslims trying to overcome “bad” Muslim plots. In either case, they “are still constrained by conflictual framing,” typically around themes such as terrorism, post-9/11 politics or overseas military intervention.

But Hollywood is slowly changing this paradigm as writers, show-runners, producers and directors reach out to cultural advisers and Muslims become part of the creative process. The Muslim Public Affairs Council’s Hollywood bureau and other informal networks of academics, policymakers and regional studies experts are increasingly recruited by the movie and TV industry to offer advice on scripts, review raw footage and correct pronunciations for actors.

Saudi filmmaker Jassim Alsaady, who served as cultural adviser and Arabic dialogue coach on the fictional Saudi Arabia-set film “A Hologram for the King,” said he was “disgusted” by “American Sniper” and its one-dimensional depiction of Iraqis “as people who want to kill you.”

“Hologram,” a comedy-drama based on a Dave Eggers book, tells the story of a desperate American salesman who travels to Saudi Arabia to pitch a teleconferencing system to the king and ends up falling for his Muslim soon-to-be-divorced Saudi doctor, Zahra.

Tom Hanks, who plays the salesman, said in a video about the the film, “I think that the key to making movies now is to surprise the audience. … I never thought I’d see a movie about a guy who goes to Saudi Arabia and everything works out for him.”

Alsaady, who lives in Jeddah and Berlin, said the German director and crew were welcoming and receptive to his suggestions. He was part of the casting process, consulted on the script and was involved in production and post-production for the film.

It was the desire to see better stories about Islam and Muslims on screen that prompted MPAC Hollywood bureau consultants to work on the 2014 Forest Whitaker/Harvey Keitel film “Two Men in Town” and the 2014 Kristen Stewart/Peyman Moaadi Guantanamo film “Camp X-Ray,” as well as the TV series “American Odyssey,” “Criminal Minds: Beyond Borders” and “Tyrant.”

Suhad Obeidi, the bureau’s director, said she began to notice a change for the better in the way Muslims are portrayed in films and TV about five years ago. She’s hopeful the entertainment industry is “turning the corner” but admits “we have a long way to go.”

The MOST Resource project (or “Muslims on Screen and Television”), founded eight years ago, has a similar mission: providing the Hollywood creative community with resources and information on Muslims in America and around the world through TV consulting, a Story Bank and events that bring the policy and creative communities together.

MOST, which works in partnership with the Brookings Institution and Gallup, connects Muslim experts with writers and producers who are seeking advice on anything from pronunciations to character development to more in-depth work on scripts and production.

It has referred experts to several shows, including “Grey’s Anatomy,” “Army Wives” and more recently “Madam Secretary” and “Tyrant,” a drama that centers on the youngest son of a Middle Eastern dictator who returns to his homeland with his wife and kids after 20 years of living in America.

“More and more TV programs … are playing out storylines that involve Muslims in American society,” said Michael Wolfe, MOST’s co-director. “Television and films have been our way of coming to terms with new groups and understanding them for decades; from the African-American community beginning in the 1970s, to women in the workplaces in the ’80s and ’90s, to the LGBT community beginning in the ’90s. Muslims, in that regard, are the news kids on the block. They are small in number, but they represent a huge population globally.”

Obeidi said MPAC consultants have given notes on outlines and scripts for “Tyrant” and have also reviewed the raw footage. Wolfe said “Tyrant” is the “most receptive program that we’ve ever worked with.”

One of the more powerful “Grey’s Anatomy” storylines that MOST consultants worked on, said Wolfe, involved a pair of Syrian doctor characters who came to the Seattle hospital to learn war zone field techniques, and left with a planeload of medical equipment gifted by the American doctors. MOST’s role in that April 2013 episode was in getting the writers in touch with real Syrian doctors, and helping choreograph some of the scenes.

MOST’s work with the political drama “Madam Secretary” included finding an Iraqi expert to make an Iraq scene sound plausible, and helping with character development of the secretary’s husband, a Georgetown University theology professor. To make him more credible, MOST put the show in touch with Georgetown University religion professor John Esposito.

In the ABC crime drama “Quantico,” Lebanese-born Yasmine Al Massri plays twin FBI recruits Nimah and Raina Amin (one veiled and one not). Obeidi, who doesn’t consult on this show, said she likes that it’s “balanced” in that the character is able to “keep everything honest” by making a point of differentiating Islam and terrorism when it comes up in the storyline.

Petersen, the religious studies professor, notes that it’s “very rare” to see “a complex character that just happens to be a Muslim, and is not uniquely identified by some essential ‘Islamic’ trait.”

There are exceptions, he pointed out, such as the character Abed of “Community” and Sayid of “Lost,” who “were not defined by their religious practice or communal identity though they were marked as Muslims by the shows’ creators.”

The more common portrayal of Muslims as terrorists is “extremely damaging to the public perception of Muslims and Islam because they wrongly suggest that there is an inherent license to commit rampant murder and terrorism embedded in the faith itself,” added Sabir Pirzada, a Muslim screenwriter from San Jose.

Pirzada said he wishes that screenwriters would examine the true causes of such violent acts, such as “politics and mental health.”

Cultural advisers, while part of the creative process, have only have so much control over outcomes.

That’s one reason MPAC organizes a yearly Hollywood summit — the next one is in July — where the organization introduces 15 emerging young Muslim leaders to the industry, by visiting studios and holding roundtables with TV executives. Past summits have resulted in internships and jobs, including at the 20th Century Fox studios.

“I think pop culture is more powerful than government policies,” said Obeidi. “Government can protect our civil rights as American citizens, but it won’t tell people how to feel. It won’t make people respect, like us or accept us. … A great movie can change hearts and minds.”

(Julie Poucher Harbin is a correspondent based in Cary, N.C.)

Previous Our Transition into a New Religious Axial Age
Next Welcoming the stranger: What I learned from Jewish agencies