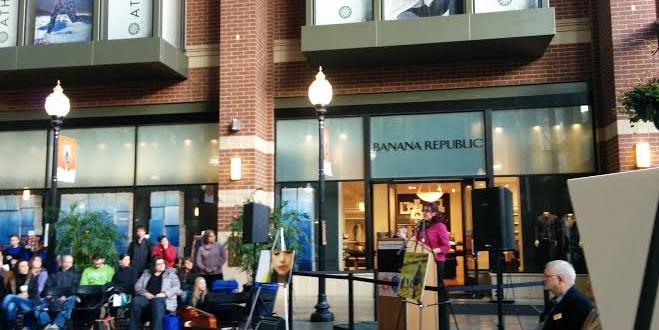 The group in River Park Square mall’s atrium overflowed the 80 chairs meant to seat them. Approximately 150 people crowded near a podium, behind the rows of chairs and wandered through rows of easels displaying art pieces with titles like ‘Look Below the Surface.’ That work, a mixed-media collage about the history of slavery in the United States and beyond, was, like the others, for sale, with all proceeds to benefit victims of human trafficking through Lutheran Community Services Northwest (LCS).

LCS and Partners for Art, both Spokane-area nonprofits, worked together to make the fourth annual Human Trafficking Candlelit Vigil happen on Jan 11 at the downtown mall. Partners for Art commissioned the pieces. A string duet played in the background as the crowd grew larger.

“What we’re trying to do is be a voice to the voiceless,” she said.

City Council members Ed Pace and Mike Fagan made an appearance to each formally declare Jan. 11 Human Trafficking Awareness Day, calling trafficking ‘a crime hidden in plain sight’ that most people are unaware is happening in the city.

A theater group with Partners Through Art performed a two-person skit, acting as trafficking victims and imploring the audience to look around them, to be aware of their surroundings and spot others who might need help.

“At any given moment, we all make a choice to act. We can do something, or we can do nothing,” said Taylor Pedroza, one of the actors.

As trafficking survivor Amber Dawn McCall took the stage to tell her story, the crowded atrium fell silent. Onlookers stopped to stare and listen from the upper levels of the mall as McCall told the audience how she had been born into the world of human trafficking, exploited as a child and rescued at age 6.

She isn’t a stereotypical victim of trafficking, if there is such a thing, McCall explained, and most people who come across her in casual settings are unaware of her past. She is the mother of six children and is active on many community boards and in several local organizations. Because of her past, she is all too aware of how what she calls the ‘othering’ of trafficking victims can be hurtful and damaging, McCall said. She told the story of Jesus and the Good
Samaritan from the New Testament in the Bible, referencing it as a positive example of someone who knew how to be a good neighbor, no matter how unsavory someone’s past or cultural associations might be.

“(The Samaritan) understands what it’s like to be the other, to be rejected,” she said.

“Every form of human trafficking is driven by our demand,” she said.

McCall challenged the audience to purchase ethically-produced goods or buy secondhand, and to think twice before purchasing products like pornography, even if they are made by actors who are not coerced into being in the films.