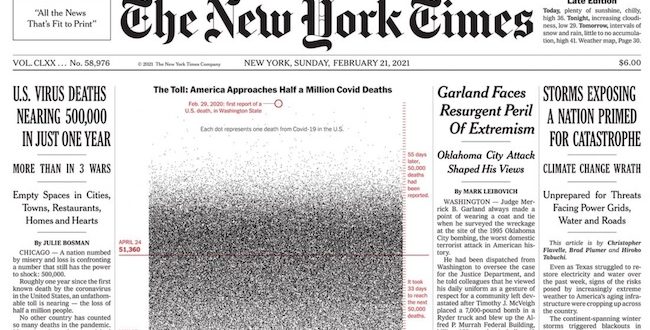 We are all dead.

Every one of us. Men. Women. Children. Old. Young.

In and of itself, the number is difficult to grasp for most of us. We need the help of a good analogy. Hence the reference to Spokane County.

Think about it. In just a bit more than a year, if strictly localized, the pandemic would have depopulated all Spokane County, from Liberty Lake to Deer Park to Cheney to the cities of Spokane and Spokane Valley.

Of course, all analogies are imprecise. Nationally, COVID has disproportionately killed people of color, Tribal peoples, and the elderly. Spokane County has disproportionately fewer of those than the nation. So, if it helps put the pandemic in perspective, simply eliminate every Spokane County grandpa and grandma and eliminate all people of color, all Tribal peoples. Do the same in Whitman County and Latah County in Idaho and there would still be deaths to spread around.

Are you truly horrified yet?

When I was teaching the intro media and society course at the University of Idaho, I would open every class session with a brief current events quiz. On Jan. 24, 2020, this was my question:

In those first weeks of 2020, the most pessimistic estimates suggested the final death toll in this country could reach 200,000. We were horrified by the carnage in Italy, still puzzling out events in China. But I told my students that the projected U.S. death toll was inconceivable, that American resolve, ingenuity, and science would find an answer before we would reach that unimaginable number.

The horrifying U.S. death toll was the subject of a stunning graphic on the front page of the Feb. 21 New York Times.

As a nation, we allowed our government and anti-government factions to politicize the pandemic, to demonize science and scientists and to delegitimize even the most basic public health response, and not just at the national level.

Last summer, I watched with bemusement as anti-mask protesters demonstrated in front of the home of our neighbor, Bob Lutz, the former Spokane County public health officer. Lutz had responded early and aggressively to the expanding pandemic, ordering closures of certain businesses and limits on public gatherings. The protesters argued his orders were an infringement on their rights. Some said he was a tool of Satan.

In retrospect, bemusement was not the proper response. Outrage? Certainly. The outrage maybe even more justified when Lutz was fired, in part because Spokane’s mayor, Nadine Woodward, was frustrated by the doctor’s reluctance to reopen the county given growing case numbers. At the federal level the president and his acolytes failed to develop any sort of coherent pandemic plan. That left each state to do what it could, almost always without federal support and often with outright federal opposition as when President Trump personally attacked Washington Gov. Jay Inslee for his pandemic response.

But it got worse. Roughly 150,000 of the COVID deaths to date – one third of the total – occurred between the presidential election on Nov. 3 and the inauguration of President Joe Biden on Jan. 20. While President Trump fumed over the election results, he absented himself entirely from any COVID response. Worse, he ordered administration officials to interfere with the Biden transition, meaning the Biden team had to scramble in its first days to simply determine what precisely the federal government was doing, or not doing, to battle the pandemic.

That led the respected journal, Foreign Policy, to declare on Feb. 18 that Trump is guilty of pandemicide on the basis that the U.S. death toll doubled between early October, when Trump was released from the hospital after battling his own infection, and the Jan. 20 inauguration. That was 200,000 deaths, 40 percent of which could have been avoided with even the most basic remediation efforts. That was 80,000 lives lost to presidential pique, as Foreign Policy asserts.

With the vaccine rollout proceeding, albeit awkwardly in places, there is growing hope that the worst is behind us. People will still become sick and some will die. But based on what is now known, we will develop what scientists call “herd immunity” later this year, maybe by late summer or fall.

Does that mean a return to normal? No. Not in our lifetimes, maybe never. How can there ever be a normal when, as a nation, we will bury something on the order of 600,000 people, victims of a disease that could have been corralled sooner had we demonstrated the will.

History’s verdict will be harsh. At some level, we are all guilty of pandemicide.

Previous Holding On In The Letting Go In A Pandemic: Dismantling the Lines
Next Inequities in How We View Homelessness, Part 3