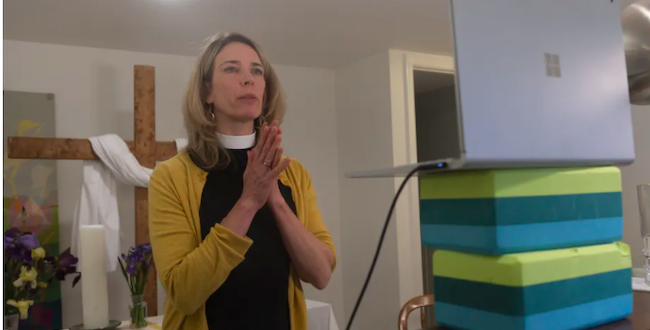 Religious services through Zoom: A pastor conducts online services from the basement of her home in Falls Church, Virginia. Photo by Andrew Caballero-Reynolds/AFP via Getty Images

As religious services went online to protect congregants from the coronavirus, a paradox emerged: Worshipers were connected via the internet to a potentially wide community, but it felt like a more private affair.

Yes, such Zoom services are viewable by audiences worldwide. But this diverted attention, if not attendance, away from many small, local congregations struggling to survive. While many have liked this new format, there has also been criticism.

Many cultures in antiquity incorporated elements of both private and public aspects of religion.

The Hebrew Bible also contains a mix of both public and private practices of religion. The texts have a number of examples of public expressions of faith alongside passages that have become foundational for personal prayers and expressions of individual religious devotion.

In the book of Leviticus, for example, the rituals of sacrifice that took place in the temple are devoid of any personal prayers.

The high priest of ancient Israel makes a confession of sin for all of Israel at one point during one sacrifice, but this hardly counts as a personal prayer. Some rituals conducted at one of the temple altars, where a particular type of sacrifice called a burnt offering took place, were done in public view.

Yet moving expressions of personal piety also exist in the Psalms, a collection of poems in the Hebrew Bible. Many of these may have been liturgical recitations sung or recited at certain occasions and times of the year, such as at feasts and festivals in the religious calendar.

When Babylonians in 586 B.C. destroyed the temple in Jerusalem, the place where public sacrifices occurred, it sparked a crisis that changed the way people worshiped.

According to religion scholar Susan Niditch, the destruction of the temple, as the center of institutional religion, resulted in much more personal, private expressions of faith.

This shift toward personal religion happened as the population in Jerusalem, the capital of a land believed to have been given to Israel by God, was exiled to Babylon.

With the loss of the temple and the land, the former inhabitants of Jerusalem had to find new ways to worship. It had to take place without the public support of the temple. Additionally, this community no longer had their traditional family networks in the homeland.

The shift to a more personal expression of religion continued with books like Job and Ecclesiastes in the Hebrew Bible, which were written after these tragedies. These books are about the manner in which suffering happens to good people and about the difficulties of divine justice in the world.

Both Job and Ecclesiastes portray the agony of the sufferer in a first-person sort of narrative, infused with individual expressions. More than in previous writings from the Bible, these books highlight how an individual character in the book – Job or Qohelet in Ecclesiastes – struggles to understand why bad things happen in the world.

At the same time, being a part of the Hebrew Bible, Job and Ecclesiastes have shaped how religious groups have understood the relationship between individual suffering in the context of a community. When Jewish and Christian groups read these books, the interpretation of these texts shaped the communities as well.

When read in religious groups, these books are not simple stories of individuals but rather become narratives of virtue that inform religious congregations of what righteous suffering and profound questions can look like.

This tension between public and private expressions of religion continued into the first centuries B.C. and A.D. In these centuries, the Latin term “religio,” from which came the English term “religion,” often referred to civic, public expressions of ritual in service to traditional Roman gods and goddesses.

During this same time, Jesus of Nazareth encouraged his followers to pray in private and not to make a public show of prayer. The latter might, according to Jesus, promote hypocrisy and lavish displays of religion meant to promote oneself instead of care for others.

However, personal reflection and concerns for communal identity were never far from each other.

The history of religions is replete with examples of individual, personal piety, offering alternative access to God from priestly, temple-based or church-based hierarchies.

An example is monasticism in Christianity, which often cultivates private prayer practices and meditation.

In each instance, however, private piety is typically connected in some fashion to community, such as orders in monasticism.

As a result, scholars of religion as well as political scientists have questioned any absolute divide between notions of a private, personalized religion and public expressions of faith.

The idea of a retreat of religion from public view into privatized experiences is never fully accomplished, nor, as some would argue, possible.

This history of how communities adapt to tragedy could help explain the tension today between public and private practice of religion.

The effects on smaller congregations is evident when individuals prefer a pick-and-choose menu of services worldwide, such as Central Synagogue’s livestream service in New York, instead of engagement in local communities.

Even beyond religious communities, Zoom has made the expression of religion increasingly a private affair at the same moment that the election and the Supreme Court hearings have thrust religion in the public sphere.

It is worth remembering that whether historically or in the current era, one’s personal piety is never too far from the public sphere.

Previous Knowledge Puffs Up, Love Builds Up
Next Fostering a Spirit of Love and Fellowship