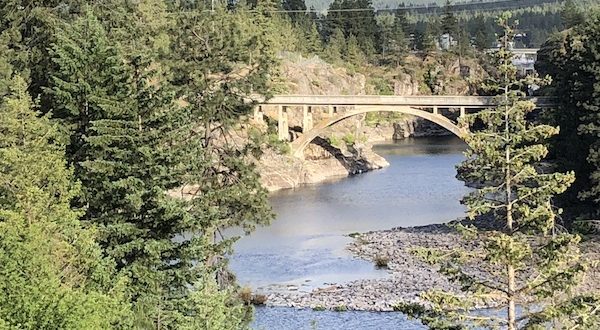 Spokane is "Near nature, near perfect" Photo by Tracy Simmons - SpokaneFāVS

Jerry White, executive director of Spokane RiverKeeper, said having to use ZOOM for meetings instead of driving to places has improved air quality. He says it’s a lesson to be more energy efficient and environmentally-friendly and use electronic tools to make sure people are intentionally reducing their carbon footprint and impacts on the environment.

Since the travel restrictions were set in place, White has noticed more people recreating along the Spokane River close to their homes. He said he hopes people will realize they can have fun close to home and won’t travel as much.

“We can really have fun very close to him and enjoy the nature that is very close to us, we don’t have to necessarily pile up in a car and go 700 miles to Yellowstone,” White said. “So I’m hoping that we bring forward a kind of intelligent approach to taking care of our local natural places, and natural resources, in a way that we see value in those places that we might not have before.”

Aside from changing everyday behaviors, the insights from the lockdown also provides an argument for moving toward sustainability.

When it comes to Christianity’s relationship to nature, Rev. Roger Hudson of Covenant United Methodist Church described how christians have separated spirituality from nature where they see subdue the earth in Genesis 1:28 as an excuse to dominate and subjugate everything related to nature for their purposes.

“That interpretation sends us over and against nature, rather than seeing ourselves, essentially as part of a garden, the Garden of Eden, and to be a steward of Creation,” Hudson said.

He added that being a steward involves honoring all lifeforms, respecting and loving Creation and enjoying the gift of life in all of its forms without destroying it.

One project Hudson is doing is creating a permaculture where he will be growing fruits, vegetables and flowers that will revolve around sustainability. This includes harvesting leaves from his trees for compost which he uses for his soil and having chickens, among other decisions for it.

“God has given us everything we need in nature, it’s just a question of us being faithful stewards,” Hudson said. “Scientists and stewards that can recognize that value of different components of Creation and then make the appropriate links to sustainably produce the food and provide the resources that we need to live on the earth.”

Citing Psalm 24, Hudson said that God made Creation and gave it as a gift to people, but everything in Creation belongs to God, and it is people’s responsibility to steward all of life.

Similarly, Tom Soeldner, a retired pastor of 40 years, said that a concern among most Christians is that they do not see themselves as part of nature, rather as over nature and are acting on God’s behalf or God’s hands instead of living with nature.

Part of the problem with the virus, along with others that humanity has and will face in the past and future, Soeldner said that it is part of people’s invasion of nature; going places where they are not suited to be. This includes clearing of the rainforests and turning forests into croplands.

He added that it would be good if people began to understand that nature is sacred and holy and should begin relating to it as such, which includes observing how people care for their lawns such as what poisons they put on it.

“If we begin to think that nature is sacred, then we begin treating it as sacred,” he said.

He described how people don’t take care of nature, nature takes care of them and they should learn ways that respect it, and not think that they can do things to change it and make it be better. He added that nature is the best that it can be now and people should learn from it.

Soeldner said that farmers are told to take care of their land, but the notion that there’s something beyond that says they, as people, are in charge of nature. However, in the big picture, over long periods of time people are not in charge but rather nature is in charge.

Instead of trying to change nature, people should learn from it, Soeldner said.

“I think nature is sacred and I try to learn as much as I can from it, and therefore learn what my place is,” he said, “and that will tell me how I should live my life in relationship to the world around me, to the grass, plants, flowers, the trees, animals, fish, the rivers and the oceans.”