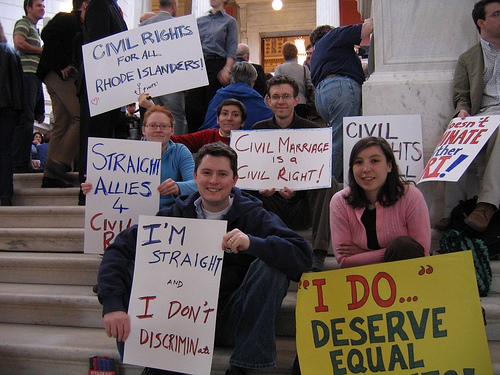 Tonight gay rights advocates from The Pride Foundation, Peace and Justice Action League of Spokane, Destinations of Spokane and Westminster United Church of Christ will swarm Spokane City Hall, where the city council is expected to vote on a resolution supporting gay marriage.

Supporters will gather at Westminster at 5 p.m. and will march to City Hall.

In a press release Shar Lichty, of Peace and Justice Action League of Spokane, said, “We need to show strong community support to make this happen. We need supporters to join us for the march and to fill the Spokane City Council chambers. All individuals who attend the council meeting can sign in to indicate that they are in support of the resolution. We also encourage those who are willing to testify to the council on why marriage equality matters to them to do so during the public comment portion.”

The resolution reads, “marriage provides legal and economic protections including access to health care, parenting rights, and property rights… the City of Spokane proudly embraces the diversity of all its residents and adopted Ordinance C-32232 on January 25th 1999 stating, ‘The City of Spokane finds that discrimination based on race, religion, color, sex,  national origin, marital status, familial status, age, sexual orientation, or disability poses a substantial threat to the health, safety and general welfare of the citizens of Spokane'; and
WHEREAS, all couples in loving and committed relationships should be given the opportunity to create stronger and more successful families through civil marriage…”

The council is expected to approve the resolution.

The meeting is slated to begin at 6 p.m.

Should the City Council vote in favor of gay marriage? Take the poll!

Previous Pastor Eric Blauer
Next Should the City Council vote in favor of gay marriage?