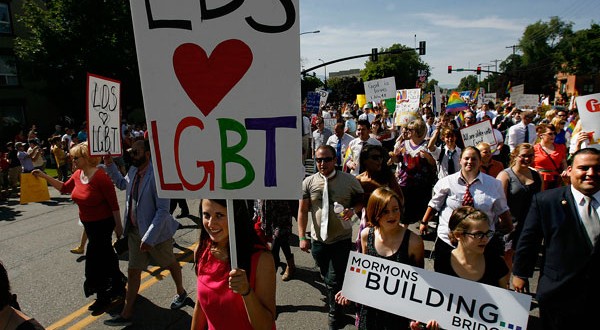 Conversion therapies don’t work, experts say, so why do gay Mormons still seek them out?

SALT LAKE CITY – Men holding other men, as fathers cradle their newborn sons. Men running naked in the woods, like innocent boys during playful childhoods. Men caressing a silky scarf, like they might a woman.

These were among the activities at a Journey Into Manhood weekend retreat, and, for $650, these Mormons were told that their attractions could change from gay to straight — or at least diminish.

After vetting the groups’ methods, a New Jersey jury determined in June that such strategies were “unsuccessful” and constituted false advertising.

So-called conversion therapy for minors now has been banned through legislative action in California, Oregon, New Jersey and the District of Columbia, and a bill has been introduced in Congress to classify as fraud any commercial conversion therapies and all advertising that purports to alter one’s sexual orientation or gender identity.

The American Psychological Association has declared it not only impossible but also unethical to try changing sexual orientation.

The newly formed, independent Mormon Mental Health Association has come out against any therapies “which have been developed to change, alter or reduce sexual orientation.”

Despite all these forces aligned against conversion-therapy programs, many gay Mormons continue to turn to them.

Why? Perhaps they are desperate to rid themselves of attractions they see as unwelcome and are eager to marry someone of the opposite sex — as their faith preaches.

The 15 million-member Church of Jesus Christ of Latter-day Saints recognizes that same-sex attraction is a “complex reality for many people,” according to mormonsandgays.org, the faith’s official website on the topic, and teaches that attraction itself is not a sin, only acting on it is.

Therapists with LDS Family Services do not offer any kind of “sexual-orientation change efforts,” church spokesman Doug Andersen confirms. But they are willing to help members who “desire to reconcile same-sex attraction with their religious belief.”

The church “maintains professional relationships with a variety of organizations to ensure the diverse needs of church members can be met in an individualized and ethical way,” the spokesman said.

The church’s silence on groups such as Journey to Manhood, however, should not, Andersen said, be “construed as a tacit endorsement or stamp of approval.”

Without explicit condemnation from top LDS leaders, change programs have sprung up, tapping into a yearning for normalcy and acceptance.

Mormonism is a community in which it has been difficult “to come out and get social support for disclosing your orientation without ramifications,” said Laura Skaggs Dulin, a gay LDS therapist in a mixed-orientation marriage.

The appeal of these retreats and workshops, said Dulin, who holds a master’s degree in marriage and family therapy from San Diego State University and specializes in same-sex attraction-related issues, “is not surprising.”

By not providing an alternative, the church unwittingly created a vacuum, she says, and conversion-aimed retreats have filled it.

In 2000, Rich Wyler, a Mormon who believes his same-sex attraction diminished with the use of some therapies, created a website, People Can Change, to profile success stories and offer online support.

Wyler’s view, unlike that of the LDS Church, is that everyone is born heterosexual, but traumas and other experiences push some toward same-sex attraction.

The retreats are rooted on the premise that many gay men “often had far too little healthy touch from father figures or brothers when they were young, and so they crave male touch today to fill that deficit.”

The retreat experiences often include a “rebirthing process” (naked men are covered with baby powder and wrapped in a blanket, explained one Jewish counselor in his trial deposition, while father figures stroke and hug them in a loving way). The men redo “adolescence” (they evaluate their bodies as they grow and change in puberty). Finally, the players find themselves in “manhood” (they snuggle with a silky cloth, imagining a woman at their side).

“All of the exercises are designed to help you identify and process the underlying issues that may be alienating you from your authentic heterosexual masculinity,” the website says.

Jeff Bennion, a Journey Into Manhood volunteer from Utah, said the experiences have helped him confront his shame, not only his same-sex attractions but also with many other issues.

“It taught me that my feelings were innately good, and a natural response to the circumstances I faced,” Bennion writes in a New York Post op-ed. “It motivated me to try to repair important family relationships, and helped me learn how to better relate to other men, whom I’d previously ignored or disdained. It’s made me much more accepting of myself and of others.”

Not everyone, though, has a positive experience with such tactics.

Craig Nielson, the youngest of four from a devout LDS family who had served a Mormon mission in Chile, didn’t know what to expect when he attended a Journey Into Manhood weekend about five years ago outside of Chicago.

Nielson had long dreamed of finding a woman to marry in an LDS temple. By the time he was 21, however, he realized his attraction to men was more than mere admiration. He went to the retreat to learn how to “manage his feelings,” he says.

When the five men in his group were asked to address problems they had with their mothers, Nielson balked. He had no anger toward his mom, he said, nor did he blame her for his same-sex orientation. Instead, he told the facilitator, who was not a licensed counselor, that he wanted help nurturing his feelings for the woman he was dating.

Stunned by what he heard, Nielson says he expressed his immediate discomfort with the facilitator’s inappropriate choice of words.

Nielson believes use of the term rape was likely an unintentional “slip” of the tongue by the facilitator. It did, however, convince him that these methods were not right for him.

Journey Into Manhood workshops may fill a need, she realizes, but she would like to see approaches that offer “a much healthier and more ethically sound alternative.”

Others, too, are looking in a new direction.

In recent months, but especially in the trial’s aftermath, some LGBT-affirming and LDS-affirming therapists have attacked one another with escalating vitriol.

Now a committee of 10 people has formed a new group, Reconciliation and Growth, to bring both sides together.

It has produced a four-page document for training therapists who deal with religious clients. The list spells out best practices, including an awareness of faith beliefs, the complexity of sexual attraction and the need to treat clients with dignity, rather than proscribe behavior.

Kendall Wilcox, a gay Latter-day Saint who helped launch a new podcast program called “Out in Zion,” is working to foster a better way by founding a small group practice called “Circles of Empathy.”

He knows firsthand the inner battles. He tried for years to make his orientation go away. He attended a Journey weekend and saw Mormon therapists offer false promises to troubled young members.

“The people aren’t the problem,” he said, “it’s the programs and their underlying assumptions that need to be exposed.”

And the answer, he said, is simple: “End conversion therapy now. Period.”

Previous Advocating, Life, Choice and Realistic Solutions
Next Father Knows Best: How can I lead a friend to faith who is an atheist?