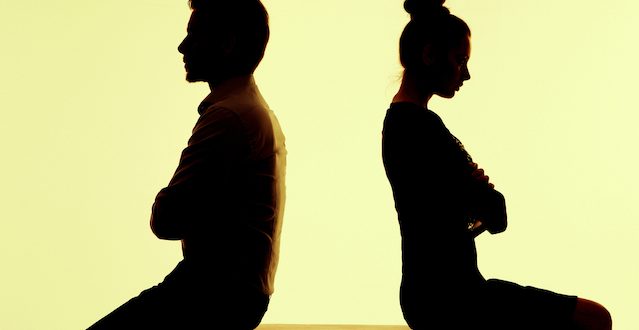 Picture of the people having break in the argument/DepositPhoto

Any absolute statement always completely shuts down meaningful dialogue between people, even when they are relationally close.

Hopefully you realized that opening was primarily for effect, but, sadly, there’s some truth there and it’s worth taking a closer look at the issue; for instance, the ‘You Never’ conversational deal breaker statement.

In an earlier article, I shared how using that phrase in a one-to-one minimizes the likelihood that the listener will take to heart what you’re commenting on, especially if they’re a detailed diagnostic type.  When that’s the case, they may log into their memory banks for the last time they did exactly what you said they never do, and then they’ll have proof that you don’t ‘ever’ get things right.

Another gut grabber is the “there’s no one who doesn’t hold this opinion” gambit.  You’d think everyone ? would realize the total lunacy ? in the statement, yet you’ll find it gets a fair amount of usage.  And who hasn’t been on the receiving end of “you’re always _____” or been slammed by a sentence with words like ‘irrefutable’, ‘undeniable’, ‘infallible’, or ‘unquestionable’?

Personally, I’ve seen these types of statements played out in many arenas, but none more regularly, by my recollection, than the world of Christian expression.  As a Christ follower myself, this hurts, but before I give you a final example and, hopefully, some ideas to keep the conversation moving. I must admit to a history, long past and optimistically unlikely to reappear, of similar behavior.

One day, while researching for an article on Nothing Forced, I found yet another phrase, that seemed perfectly suited to ending all thoughts of discussion someone might have. “The Anchor Holds” is a Ray Boltz song, where the ship’s anchor (Jesus) keeps human life (the ship) in place “in spite of the storm.”  As I searched various sites, I came across a comment that echoed the message of the song about Jesus and also expressed disbelief that anyone could think differently.  The writer said, “Truly the anchor, Christ – still, still, holds. How could anyone believe otherwise?”

Were they criticizing another person’s opinion, even before hearing it, or announcing their intent to intellectually examine the various reasons for somebody’s thoughts.  I don’t know the answer but I am pretty sure that when criticism is the real goal, we may fail to recognize that others can perceive us as arrogant, self-righteous, or foolish.  And even when something doesn’t seem possible within our spiritual or philosophical framework, it’s still a good idea to keep our minds open to other’s opinions.

Why you ask?  Well for starters, think about the statement that anchors hold and how could anyone believe otherwise.  After finding that statement and doing a little more research, I learned something I hadn’t known.

In a news report about the crew of sailors on a Vietnamese cargo vessel in 2013, I discovered that the MV Minh Tuan 68, a 2,999-ton cargo ship, was docked near Barangay San Roque in the Philippines, when strong waves, brought by Tropical Storm Gorio, battered the vessel and pushed it to the shallows of the sandy shoreline.

If a modern sailing vessel can be moved considerable distances, even under anchor, when the wind is so great, why would it be surprising to a Christian, that someone with limited or no belief in Jesus, wouldn’t celebrate their certainty over Christ’s anchoring capabilities?

When we utilize any language, in discussions or statements, that is by nature, exclusive, absolutistic, narrow, confrontational, antagonistic, inflammatory or many other adjectives I could offer, we run the risk of turning off the conversational spigot.  And that process, can do more than keep us in the dark about things we might benefit from knowing; it can also damage our reputation and hurt the relationships we, hopefully, are trying to deepen.

On the flip side, how do we react to these brutal conversational attacks?  All too often, it is with a retaliatory language barrage of our own or we use the ‘get angry and sulk’ tactic.  I think it’s safe to say most recognize the first ‘solution’ won’t likely resolve anything but there’s something about the anger approach that some miss.

Think about the driver who speeds past you on the highway, and as they’re cutting in front of you, waves their middle finger in your direction.  Your first response is anger because you weren’t doing anything wrong and they were being an idiot.  So you fuss and fume and, while they’re driving down the road, your agitated mental state somehow communicates with them.  They pull over to the side of the road and as you approach, they wave a large ‘I’m Sorry’ sign.

If you’ve ever been in this, or similar, situation, you probably know, intellectually at least, that your distressed emotional condition isn’t going to affect the ‘perpetrator’ one bit.  They’re off in their own world and your pained existence doesn’t disturb them in the least.  So, since we probably recognize that holding our hand firmly on the hot griddle handle or walking back to the person who insulted is and asking them to offend us again, is not in our best interest, perhaps it’s better to let some other things, that hurt in the moment, come to a quicker end.

P.S.  That’s easier said than done of course, but knowing what’s good for us is a helpful place to start.

Previous Ask A Muslim: Islamic Holidays
Next Ask A Jew: How come Jews pound their chest when they pray?