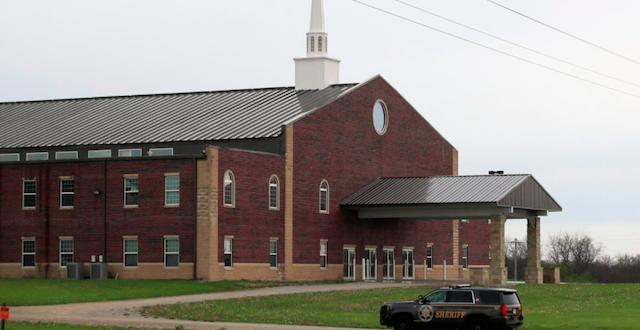 A Douglas County Sheriff's officer drives through the parking lot at Heritage Baptist Church near Lawrence, Kansas, on April 19, 2020. A federal judge has blocked Kansas from limiting attendance at in-person religious worship services or activities to 10 or fewer congregation members to check the spread of the coronavirus. (AP Photo/Orlin Wagner)

(RNS) — A conservative law firm launched a “ReOpen Church Sunday” initiative this week, calling on churches to begin gathering in person again despite reports of the deadly novel coronavirus being spread during worship services.

The campaign is organized by Liberty Counsel, which created a website for the initiative encouraging Christian leaders to begin holding in-person worship the weekend of May 3 — just days ahead of the National Day of Prayer on May 7.

“There’s a lot of practical ways that churches can begin thinking through the process of reopening and, at the same time, protecting the health of all of its participants in the community — and then giving other alternative options,” Mat Staver, founder of Liberty Counsel, told Religion News Service.

Staver’s campaign suggests churches take a phased approach, allowing some worshippers to gather in person while maintaining social distancing but also providing options for people to participate from their cars or, if they belong to an at-risk population, at home via livestream. The campaign’s website also contains a list of suggested safety measures, such as sanitizing worship spaces and checking temperatures at the door.

“We’re encouraging this to begin the process of reopening, not to fill the sanctuaries to maximum capacity,” he said.

Staver, whose group also represents a Florida pastor recently arrested after continuing to hold large worship services despite local regulations, pointed to the Trump administration’s new “Opening Up America Again” initiative as inspiration for ReOpen Church Sunday. He noted that the president’s plan lists places of worship as one of several “large venues” that could “operate under strict physical distancing protocols.”

Pressed about the concern that gathering for worship could result in infection and death, Staver was dismissive, arguing that responsibility should lie with individual worshippers, not government.

“There’s a risk walking out of the door no matter what, COVID-19 or no COVID-19,” he said. “People take precautions: If someone is not comfortable going to an in-person service, then by all means choose a different alternative.”

He added: “(Just) because you had one choir somewhere in the United States that sang together closely and some people got COVID-19 is no reason to punish the rest of the 500,000 churches.”

Incidents of worshipping communities spreading the novel coronavirus are not uncommon. In early April, more than a third of COVID-19 cases in California’s Sacramento County were linked to houses of worship. Multiple coronavirus cases were also linked to a single March 22 event hosted by a Durham, North Carolina, church. Some have expressed concerns that Jewish Purim celebrations in early March jump-started the virus’s spread in New York City. And in Virginia, a pastor who defied social distancing orders and continued to pack his church recently died after contracting COVID-19.

Staver’s views contrast sharply with those of many other religious leaders, who have insisted on keeping houses of worship closed to protect people from infection. When Georgia Gov. Brian Kemp announced he would allow churches to gather in person this weekend as part of a larger effort to reopen the state, Bishop Reginald T. Jackson, the presiding prelate in Georgia for the African Methodist Episcopal Church, instructed the state’s roughly 520 AME congregations not to gather.

“This decision by the governor puts economic interest above the safety and well-being of the citizens of Georgia,” Jackson told The New York Times.

On Thursday (April 23), liberal religious advocacy group Faith in Public Life teamed up with the Center for American Progress’ Faith and Progressive Policy Initiative to convene a Facebook Live session for clergy, calling on participants to oppose religious exemptions to stay-at-home orders.

“There are a few people who are using this false flag of religious freedom to argue that they can continue to meet,” CAP fellow Guthrie Graves-Fitzsimmons said while presenting during the livestream.

Meanwhile, some states continue to resist efforts to return to houses of worship. On Wednesday, a federal judge refused to grant a temporary restraining order that would have prevented state and county officials from enforcing California’s ban on in-person worship services during the pandemic.

The case was filed last month by three pastors and one parishioner who alleged the ban violated their First Amendment right to religious freedom.

Even the National Day of Prayer, which often features large crowds in places across the country as people gather to pray and mark the occasion, has undergone reevaluation. In a video posted in early April, National Day of Prayer Task Force President Kathy Branzell said that barring a “miracle” allowing people to meet in person, organizers are preparing to congregate virtually.

“We can shelter in place and still … pray in agreement and unity with one another,” she said.