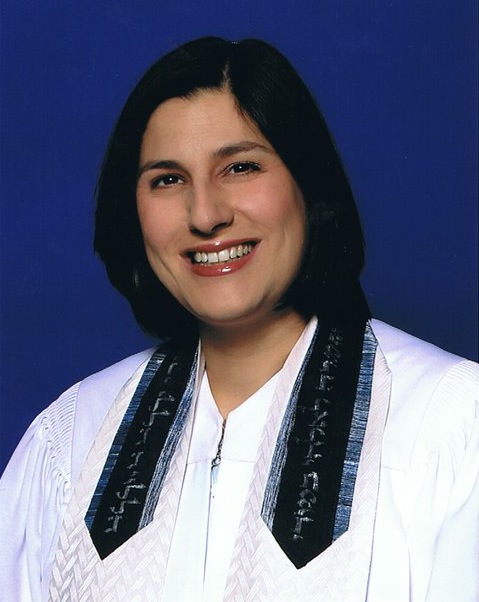 Everyone seems to have heard of Rabbi Tamar Malino.

For nearly two years she’s been the director of Spokane Area Jewish Family Services, assisting Spokane’s senior Jewish community and anyone else who walks through her door needing assistance. And in August she was hired to serve as rabbi of Congregation Emanu-El, Spokane’s Reform Jewish congregation.

But that isn’t necessarily why everyone’s talking about her.

Malino’s name has been ringing in people’s ears since April when she stood in front of the Spokane City Council and shared her personal story. She and her partner, Rabbi Elizabeth Goldstein, have been together 18 years, had a religious union ceremony 14 years ago and are raising four young children, yet the state of Washington doesn’t recognize their marriage.

“She did pique my interest after hearing that,” said the Rev. Andrea CastroLang of Westminster United Church of Christ, who was at the council meeting. “First of all, she’s a woman (rabbi), which this city hasn’t seen before, and her partner teaches at a Catholic university and that’s the main reason why she caught my attention. It’s what this city needs, other Jewish voices, more diversity.”

“I didn’t know there was any buzz about us,” Malino said, noting she’d do more activism if time allowed.

Malino and Goldstein, who met while studying in Israel, moved to Spokane from the Bay area in 2010 after Goldstein was hired by Gonzaga University to teach Hebrew Bible/Old Testament and Jewish Studies.

Malino has been working part time at JFS and said she didn’t expect to find herself behind the pulpit again, but is excited to be leading Congregation Emanu-El, especially as the Jewish community enters its High Holy Days.

“I missed it, so was ready to get back to it,” she said, about serving a congregation again. She served as a congregational rabbi for 10 years and before coming to Spokane worked as the director of Jewish life at a Jewish Community Center in California.

Miriam Berkman, board president at Congregation Emanu-El, said the congregation wasn’t looking to hire a rabbi, but saw opportunity when Malino and Goldstein moved to town. The congregation hired Malino to set up a children’s education program, and began exploring the possibility hiring her as rabbi.

“She just had an awareness of us as a forming congregation and a respect for us for developing who we are, and providing leadership in that,” she said. “She’s not telling us who we need to be, she’s willing to engage with us in a partnership where she just brings knowledge and a collaborative style.”

Congregation Emanu-El is made of about 45 families who began meeting in 1994. The group split into two congregations and merged back together three years ago. Services are held at the Unitarian Universalist Church of Spokane and until now have been lead by student rabbis or lay persons.

Rosh Hashanah, the Jewish New Year marks the beginning of the High Holy Days, which is a 10-day period that concludes with Yom Kippur, the Day of Atonement, on Sept. 26.

It will be the first time many worshipers will see Malino in action. Because the congregation has not had a dedicated rabbi, she has the freedom to create a Rosh Hashanah program from scratch, which she said is both exciting and nerve-racking.

Everyone is invited to worship at the High Holy Day services.

“I think for a lot of Jews the High Holy Days is when you come together as a community and you pray…it has this pull, this meaning that’s very deep and primal. So I want to encourage any Jew who needs that to come and pray and be a part of our community. And, for non-Jews who maybe want to understand something about our faith, we want them to come … it’s an ideal time to connect with the community and see what the faith is all about,” Berkman said.

Although it’s a busy time of year for Malino, she’s thinking beyond the High Holy Days and about congregation’s future.

She said some of her roles in leading Emanu-El will include assisting in life cycle events, counseling, administrative functions, education, social activism, and growing membership.

“Primarily I see my job as helping people make meaning in their lives, and part of that is obviously being a purveyor of Jewish traditions and the Jewish religion and helping them frame that in a Jewish context,” she said. “And a lot of the time I’m a teacher.”

“I believe everybody should find a place they feel comfortable and connected. I see that as a big part of what I do, whether it’s the cultural connection through the Jewish Film Festival (sponsored by JFS), or if they feel a particular reform connection through Emanu-El or if they’re happy at Temple Beth Shalom (Spokane's conservative congregation),” she said.

Berkman said she hopes having a rabbi on staff will encourage people to come visit the congregation.

“I think Rabbi Tamar gives us a sense of legitimacy in the community, so people who have never made a commitment to being part of the congregation, they’ll say ‘oh yes, this is a congregation that’s going to last’,” she said. “And hiring Tamar has obviously gotten us a lot more press so hopefully that will encourage people to come check us out as well.”

Malino, whose father and grandfather were rabbis, said when she’s not working at JFS, which is located at Temple Beth Shalom, or serving Congregation Emanu-El, she enjoys going to the park or playground with her children. She and Goldstein have two sets of twins.

Though being in the spotlight isn’t what they expected, Malino said they’ve embraced it.

“We’re just going to be who we are and that’s the most important thing. We’ve lived with making our way in the world and being gay and doing our jobs and dealing with the level of discrimination we deal with on a regular basis, and we moved past it,” she said.

Berkman said she appreciates her new rabbi for having the courage to be in the public eye, particularly in a conservative community like Spokane, which has a small Jewish population.

“She’s willing to be who she is in a public way and I admire that leadership,” she said.