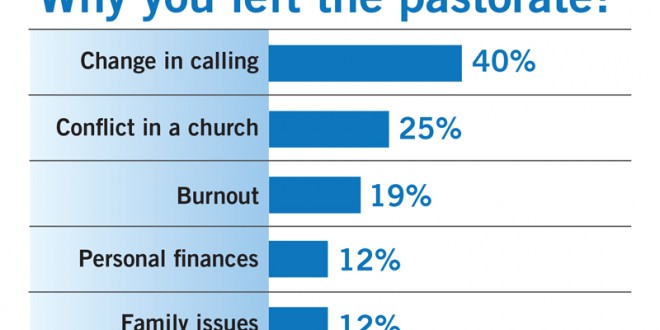 (RNS) Sometimes a call from God is not enough to keep a pastor in his post.

Many evangelical pastors who quit before retirement age found “another calling” either off the pulpit or out of ministry altogether. But many also say they were driven away by conflict and burnout. So says a new survey of former pastors from four denominations.

The single biggest reason (40 percent) for leaving was “a change in calling.” Conflict in the church drove out 25 percent. And 19 percent succumbed to burnout. Those were the top three reasons in the survey by LifeWay Research, released Tuesday (Jan. 12).

LifeWay surveyed 734 former pastors drawn from lists provided by the Southern Baptist Convention, the Assemblies of God, Church of the Nazarene and the Lutheran Church-Missouri Synod.

Several said they came into their pastor posts unprepared for intense demands for counseling and untrained in dealing with church boards and were soon overwhelmed by the lack of support.

“Almost half of those who left the pastorate (48 percent) said their church wasn’t doing any of the kinds of things that would help,” said Ed Stetzer, executive director of the Nashville-based research organization. Specifically:

And very soon there was trouble:

“Many seminary programs don’t even require courses on the people side — they’re focused on theology, biblical languages, and preaching, which are important, but almost half of the pastors felt unprepared for dealing with the people they were preparing in seminary to lead and serve,” Stetzer said in a press release.

“These things are interrelated,” Stetzer said. “If you’re burning out, chances are when conflict arises you’re not going to respond well, and that will make the conflict worse.”

Conflict is a killer for churches, too, according to the latest edition of the American Congregations studies by the Hartford Institute for Religion Research.

The 2015 report, issued last week, is based on reporting by clergy or senior staff at more than 4,000 congregations.

“Serious conflict crushes growth,” said the report’s author, David Roozen. He found that congregations that had only little or no conflict were more than 50 percent likely to have shown growth in worship attendance in the last five years.

But among congregations that reported serious conflict, only 29 percent showed growth.

(Cathy Lynn Grossman is a senior national correspondent for RNS)

Spokane Clergy Plan to Commit to Year of Anti-Racist Work

White faith leaders in Spokane will gather on Sept. 25, four months after the death of George Floyd, to make a public act of repentance for the sin of racism, according to an announcement.