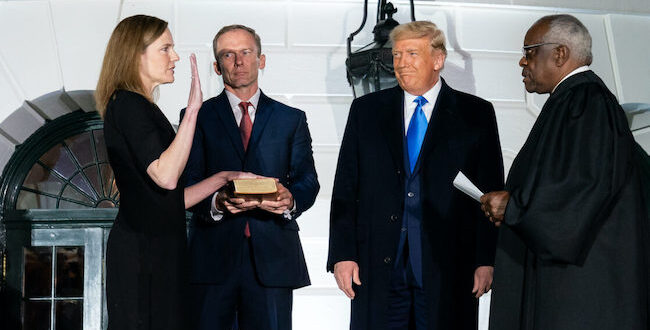 Last night, Amy Coney Barrett disgraced herself by allowing Donald Trump to use her as a political tool and campaign prop in his bid for re-election.  Her participation in a “ceremonial” swearing-in at the White House was political theatre and a campaign event designed to benefit one person and his family and one political party.

In the span of a few minutes, Judge, now Justice Barrett undoubtedly violated three canons of the Code of Conduct for United States Judges:

Although this last code does not explicitly apply to Supreme Court justices, Judge Barrett herself in her confirmation hearings stated she does follow the Code and intended to continue to do so as a Justice.

Ethics, in general, are for the discernment of good or right behavior, not only for the individual, but more importantly, for the good of society.  Similarly, the Canons of ethics for judges are not primarily for the judges themselves, but to protect the judiciary from errant behavior of its members.  They are in place because “an independent and honorable judiciary is indispensable to justice in our society” (Canon 1).

It is confidence only that allows a just and civilized society to accept and respect the decisions by its officials and judges. That confidence is undermined, indeed betrayed, when the persons charged with the public trust and the wielding of power are seen as partisan and biased and corrupted by undue influences. Confidence in the fairness of the system and the professional integrity of the people who are administering that system are essential to the legitimacy of the outcome.

Anything that tends to diminish and erode that confidence is damaging to the fabric of the society that the Court and its members are designed to serve.  Justices are required to swear not just a judicial oath but an oath to the Constitution.  The Constitution is not just the law of the land, but it is the basis upon which Americans agree to live together as Americans.  It is the Constitution and its ideals and values and principles to which the highest fealty is owed, not to any passing political movement or temporary power holder.  The Constitution.

The true significance of Justice Barrett’s breach of judicial ethics and decorum is not so much what it says about her as what it means for Americans having the requisite faith and confidence in the Supreme Court.  How are Americans supposed to believe in the justice of decisions from the highest court in the land when the institution itself is tainted with the suspicion that its members are not impartial servants to the Constitution but are advocates for their personal political, religious and class beliefs?