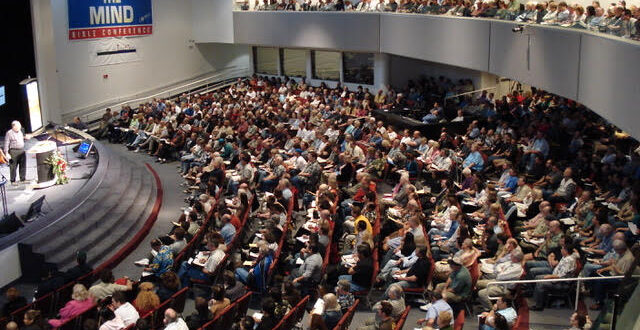 On Saturday, Perkins’ ministry will elaborate on these signs by hosting its annual “Steeling the Mind Bible Conference” from 9-5:30 p.m., at Candlelight Christian Fellowship, also in Coeur d’Alene.

He said he sees the mainstream media’s exaggerated reporting on the war in Ukraine, COVID restrictions and mandates, mRNA vaccines, the educational system behind critical race theory, globalization and more as biblically prophesized precursors to the time when Jesus returns to earth in bodily form, themes which will be explored at the conference.

“As believers we can never ignore or condone the tragic suffering of innocent people,” Perkins wrote about Ukraine in his March 3 Compass eNews article, “Play It Again Sam,” which reaches more than 50,000 subscribers, several of whom attend “Steeling the Mind” conferences.

“But just like the United States, many of the Ukrainian leaders are politically and satanically corrupt. Ask Hunter Biden who’s been paid no telling how much for his influence as the son of Joe Biden,” he wrote.

A Christian, the husband of his wife, Susie ,for nearly 50 years, a dad of two grown daughters and a grandad to seven grandchildren, Perkins has spent most of his life taking on a prophecy-deciphering mantle to teach others to be ready for Jesus’ second coming largely by decoding current events.

“My heart is that I’ve tried to be honest and obedient to what I think God wants and he’s given me some knowledge in some areas of apologetics and Bible prophecy that apparently I can look at things and see things seemingly that I can filter through pretty quickly,” Perkins said.

The bulk of his ministry is a defense of biblical prophecies and the belief in a rapture of true Christians into heaven before a seven-year tribulation where the world is destroyed by God’s wrath, all of which precedes Jesus’ second coming and the inception of his 1,000-year kingdom rule on the earth.

“I’m teaching Christians that are sold out for God who believe the word of God is word for word and they believe that the Lord’s coming back soon and how can they do things to be used by him in the lives of other people,” Perkins said.

Speakers of this year’s conference include Andy Woods, president of Chafer Theological Seminary in Texas, Russ Miller, founder of Creation, Evolution & Science Ministries in Arizona and a few medical doctors who will caution attendees against COVID vaccines and government mandates.

One of the doctors is Peter McCullough, a “Cardiologist and International COVID Expert,” according to the conference’s flyer. He has been featured on FOX News, Joe Rogan and The HighWire with Del Bigtree, founder of anti-vaccination group Informed Consent Action Network.

A March 7 article on MedPage Today describes McCullough as one of the doctors involved in the group Public Health and Medical Professionals for Transparency along with “several physicians known for spreading false or misleading information during the pandemic.” However, the conference’s flyer said he “has the true scientific facts (about COVID) and will let the fur fly in this video message to Steeling attendees.”

Jesus’ disciples asked him pointedly “What will be the sign of your coming and of the end of the age?” as recorded in Matthew 24:3. Although Jesus answered them with descriptions of many signs and wonders to expect before that day, he ultimately concluded, “No one knows about that day or hour, not even the angels in heaven, nor the Son, but only the Father” (Matt. 24:36).

Still, there have always been Christians, largely on the peripheries of traditional Christianity, who are on the lookout for end-times global conspiracies, according to Matthew Sutton, history professor and history department head at Washington State University.

Sutton is also the author of “American Apocalypse: A History of Modern Evangelicalism,” a 2014 book about how end times prophecy teachings over the years have helped Christians make sense of the catastrophic world events of the 20th Century and also how this theology and language influenced the Republican party from the time of Ronald Reagan. The book posits that this syncretism of politics and religion resulted in moving political conservatives away from a more “pragmatic tradition of governance through compromise and consensus,” according to the book flap.

“[Christians] want to understand the signs of the times and so then they find events and people and things in the news that fit what they’re looking for and the prophecies are vague enough that you can really find them in every generation,” Sutton said. “And that’s what I tried to show in my Apocalypse book. It’s really amazingly malleable how you can read Revelation into whatever geopolitical crisis that’s happening at the moment.”

He added that he doesn’t think Christians who lean this way are dishonest. Rather, they do not know their history – how that over the last 100 years, for example, possible Antichrists and the signs of the times have included Saddam Hussein, Benito Mussolini, the internet, credit cards, the radio, etc.

John Sowers, senior pastor of First Presbyterian Church of Spokane, doesn’t think ministries like Perkins’ represents all evangelicals. He categorizes himself as a Presbyterian with an evangelical understanding because he says he holds true the classical definition of the term, which embraces the “beauty and the necessity of a personal relationship with Jesus Christ and a high view of the authority of scripture.”

Still, in light of ministries like Compass and their politicization of end-times teaching, he finds he needs to explain that definition with more caveats.

“It saddens me, and I think it saddens a lot of us who come out of this tradition that [Evangelical] has been co-opted, where it means that you’re, almost by definition, part of a particular political party,” Sowers said. “It comes with all sorts of cultural baggage that I don’t ascribe to. And I think it significantly diminished any of the winsomeness that you would have had in using the term 20 years ago, 30 years ago.”

Presbyterian theology also teaches Jesus will return again, but with an amillennial view of the end times. This view does not espouse a literal rapture of the church, a tribulation period nor a literal, 1,000-year kingdom reign of Jesus after that tribulation. This view teaches that the kingdom of God is both here and not yet, which would lead people to make steps to seek justice and care for the creation in the present.

“It doesn’t presuppose that we’re responsible for that, because ultimately, Jesus is responsible for that,” Sowers said. “But if we’re following Christ, we want to be a part of it. Right? Our motivation is to exemplify or to provide an initial witness to the goodness of what Christ will do when he returns again.”

And while he is not immersed in Perkins’ view of the world in his own congregation, he does see, “a cavalier sort of attitude about the environment and how we treat people” among groups similar to the audience Compass reaches, even though he is not familiar with Perkins’ ministry, particularly, but rather with ministries like his.

Catholic Theology Teaches Since Jesus Ascended to Heaven, the Church Has Been in the End Times

The Roman Catholic branch of the Christian church also believes Jesus will return again, but according to the Rev. Lucas Tomson, a pastor at St. Peter Catholic Parish, the Catholic Church teaches on the Bible’s prophetic passages with more of a focus on the present instead of the future.

“The Catholic Church teaches that ever since Christ ascended into heaven, 40 days after the resurrection … the church has been in the end times,” Tomson said. “Every Sunday, we profess the creed at Mass, and we always say, ‘He will come again in glory to judge the living and the dead, and his kingdom will have no end.’ So, every Sunday, we have this, in a sense, expectation that he’s going to come again.”

From the time when Tomson was a little boy he has been fascinated by apocalyptic stories and teachings. As he’s gotten older, he has come to understand many Christians’ attraction to study prophetic events from the Bible. While he doesn’t speak for all people, he believes two main draws to this teaching are comfort and a prideful elitism.

“Life is hard, and we have all sorts of struggles and difficulties, the travail of this earthly existence,” Tomson said, adding that to say the end times, “is happening soon is in a sense a great comfort, because it’s like, OK, I don’t have to get too engaged in this world. It helps us to remove ourselves from the messiness of life.”

“At the same time, I think there’s also a sense in which there can be an elitism and a pride that is intertwined in all this that ‘I have this knowledge, this awareness that it’s happening, you don’t, but I do, and there’s people like us, there’s the others out there’,” he said.

And while for the last 2,000 years, apocalyptically-minded groups have said Jesus is coming soon and the world will be ending, Tomson said, “They’ve all been wrong.”

“But that doesn’t change the fact that we believe he’s coming again, he is coming again in glory to judge the living and the dead,” he said. “We do believe in the Second Coming, and we believe that we are in the in the end times. But we don’t know the day nor the hour.”