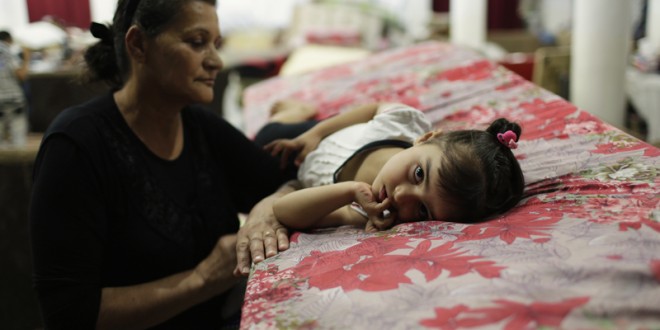 Displaced people from the minority Yazidi sect, who fled violence in the Nineveh Plain in northern Iraq, take shelter at Margurgis Church in Dohuk on Aug. 20, 2014. Photo courtesy of REUTERS/Youssef Boudlal

As I watched the news the other night—cozied up in my favorite blanket, eating a bowl of spaghetti—I found myself feeling the urge to change the channel. Because the presentation of so much inhumanity was upsetting me and intruding on my place of sanctuary.

If only it were that easy to turn off the troubling events that are taking place at this very moment across the globe.

Over the past four years, 220,000 people have died in the war in Syria. That’s about 150 people per day. Four million refugees have fled their homes because of the terrorism that exists outside their front door. And these and millions more are in need of urgent humanitarian assistance.

It’s hard for me to truly internalize their experiences because they are in such stark contrast to my own daily realities. And given the fact that I live over 6,000 miles away from these people, I have the luxury to block their stories from my mind so that they won’t weigh on my emotions—if I so choose.

But I am my brother and my sister’s keeper. And I had no more control over my birth on American soil than they had over their own place of birth. And because of that, I am in no way more entitled to life, liberty, and the pursuit of happiness than they are.

I hear heart-wrenching stories of individuals and families who have fled their homes and risked it all in search of safety, and I cannot relate to them in the least degree. But I can still have empathy.

My selfish human tendency is to say that the problem is not my own and that I do not have the capacity to help everyone who stands in need of aid. But I can fight my inclination towards that comfortable resignation and replace it with action—however small it may be—fueled by morality.

In my lifetime it is likely that I will not personally encounter many of the world’s most marginalized populations. But I can still reach out a hand in compassion—unconditionally—just like I’ve been taught to do my entire life. Because “charity never faileth.”

And in the face of fear, we can all have the moral courage to say that no human life is expendable.

Give me your tired, your poor,

The wretched refuse of your teeming shore,

Send these, the homeless, tempest tost to me,

I lift my lamp beside the golden door.

Inscription on the Statue of Liberty

Previous Blood cries out
Next A Port in the Storm