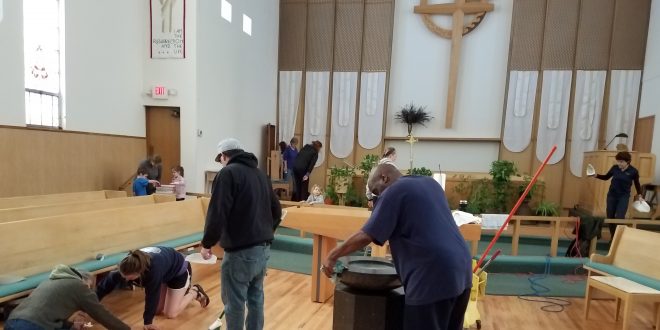 The Rev. Liv Larson Andrews, pastor of Salem Lutheran, said the vandalism that occurred between 5pm Monday and 9:15am Tuesday was most likely a random act committed by those who gained entrance to the church through an unlocked door rather than a hate crime. Andrews said it was likely, “either people who were on controlled substances of some kind, or maybe even kids just totally unattended and found an open door.”

“A few of our rooms were kind of trashed, like in the sanctuary there’s spilled wax, melted wax, and wine,” said Andrews, “lots of linens pulled down, we’ve got a pitcher we use with our baptismal font that’s broken.”

Andrews added that a table and a covering of a piano were broken in the fireside room, “glass pebbles” were scattered throughout the sanctuary, a glass dish and square tile were broken, chairs were pulled out. Graffiti was scribbled on a window, and “HIGH TIMES @ 8 AM?” was written on the elevator with the rest of the writing being unintelligible.

“If you look at it [the window] you can sort of make out some names,” Andrews said. “But no messages…certainly nothing hateful.”

There was also water damage to the ceiling of the fireside room after a sink in the sacristy was left running.

According to Andrews, despite the damage nothing valuable was stolen. This is first time she has seen vandalism done to the church since she became pastor seven years ago.

Carolyn Payne, the church’s music director, said the intruders got into the main office, but did not do any damage. “What they did was they took some of the papers that were on the secretary’s desk and put them in the desk,” Payne said. “They didn’t just rip things out, it was more like they were playing.”

Andrews said 20 to 30 volunteers from the West Central neighborhood, several families from her son’s school, and other Lutheran pastors – including the Rev. Martin Wells; bishop of the Eastern Washington-Idaho Synod of the Evangelical Lutheran Church in America (ELCA) came to help.

John Hawkins, a volunteer, said he joined the cleanup effort after he and his wife saw the incident on the news. He was not surprised by the large turnout of volunteers. “I’ve walked around this neighborhood and you’ve got some pretty nice people around here, so it didn’t surprise me,” he said.

Payne said the “spectacular thing” about the cleanup was the amount of people who volunteered. “They’re not even people who are necessarily worshipping here,” Payne said, “but they’re connected to this church through the people that are here and the ministry that comes out of this place.”

“In the end, it is beginning to seem like it’s more of a community bonding kind of thing,” Andrews said.