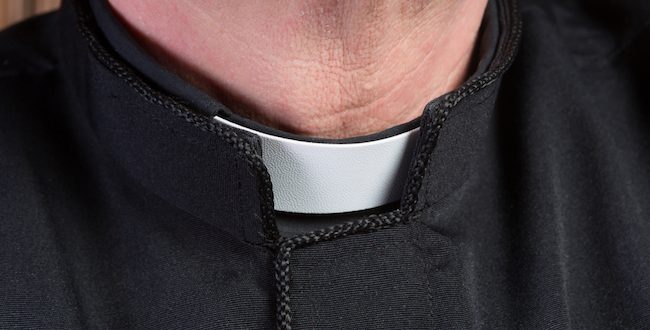 After visiting a parishioner in the hospital yesterday afternoon, I decided to walk home along Portland’s Alberta Street. It is unusual for me to be in the Alberta District while wearing a clerical collar: although I spend a fair bit of time in the bustle of that marvelous neighborhood, I typically go dressed in civvies, identifiable neither as a Christian nor as a priest. But yesterday I walked through that neighborhood looking like a priest straight out of Central Casting.

It was a fascinating experience.

While a handful of folks appeared somewhat nervous or guarded when they saw me coming their way down the sidewalk, most people reacted with a warmth that surprised me a little and pleased me a lot. Three separate people even initiated a conversation with me— an experience I don’t have often when I am on the street in a hoodie or a T-shirt.

The most memorable of the three was a man who stopped his bicycle, pulled it off the road and onto the sidewalk beside me, and, pointing at the collar, asked me, “Is that for real?” (That’s probably a fair question to ask in Portland.)

I told him that it was. And so the man and I shook hands—he said his name was Richard—and he began to tell me about his prayer life, his ongoing, lively conversation with God. God, Richard explained, is continually challenging him and comforting him, continually inviting him into opportunity and possibility. And then he added, (marvelously, mischievously and yet somehow piously), “God is a hard guy to get along with.”

I told Richard that I had never heard anyone put it that way before, but that I kind of understood what he meant.

I sometimes look with just a little envy at those of our Jewish, Hindu, Muslim and Sikh neighbors whose practice requires them to dress in a way that broadcasts their faith to the world. A Christian may wear a cross if they so wish, but it is not a requirement. And a cross is easily lost or hidden within a shirt, a blouse or a dress. I wonder if these other faith traditions don’t get something right when they declare that it is important to be visible as someone who is consciously responding to and saying yes to Divinity.

Here in Portland, we often tell the story that our fellow Portlanders are ambivalent about faith or allergic to it. But my experience yesterday on Alberta Street suggests that our neighbors might be something else: they might be curious about faith. Folks want to talk about the mystery that we call God, about their own encounters with the Divine and about how those encounters might be mirrored in our own. When we allow ourselves to be identified as people who share in their holy curiosity, we invite the conversation to begin.