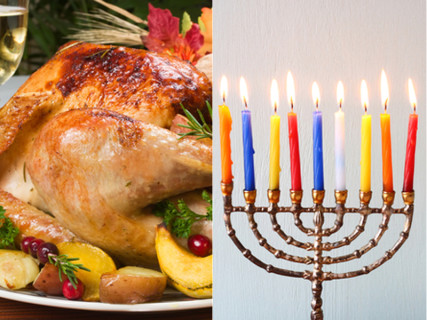 This year, due to a rare alignment of sun and moon (solar and lunar calendars), Thanksgiving and Hanukkah collide. These two celebrations, it turns out, are grounded in such similar narratives that I’m sure my son is not the only 4-year-old who came home wide-eyed sharing the story of the wicked Antiochus who denied the Jews their religious freedom, prompting them to sail across the ocean on the Mayflower, where they rededicated the Temple and ate latkes with their new Native American friends.

Hard to miss the common threads: the struggle for religious freedom; the courage to fight for a different kind of life, liberated from oppression and persecution; the need to give thanks for the blessings in their days in ours.

But even more interesting to me than the harmony is the cognitive dissonance between these two holy days. Consider: The spiritual heart of Thanksgiving is the recognition that gratitude is not about having everything we want or even need — it’s about finding appreciation despite what we lack.  It’s about holding awareness of what’s missing, yet not being defined by it. Making space, instead, for recognition of the abundant blessings we all have, even in the darkest and hardest moments. Thanksgiving is about finding a way simply to be grateful for what is.

At the heart of Hanukkah, on the other hand, is the challenge to honor the sacred hunger for light in a world that bleeds with human suffering, injustice, loneliness and so much darkness. On Hanukkah, we retell the story of a people who refused to accept the desecration of their traditions and the destruction of their people. We celebrate a family that would not back down from the fight — even when it was absurd to believe that they’d prevail. A history crowded with moments of triumph and vitality that emerged only when people stubbornly refused to accept what was, and instead insisted on fighting for what could be.

As you light the first Hanukkah candle tonight, take a moment to breathe in the holy confluence of acceptance and nonacceptance, appreciation and agitation. May this tension inspire wonder and wakefulness, hope and chutzpah in us all.

(Rabbi Sharon Brous, a leading voice for active Judaism, is the founding rabbi at IKAR, an innovative Jewish community in Los Angeles.)

Previous I love a good stout relationship
Next Trying something new