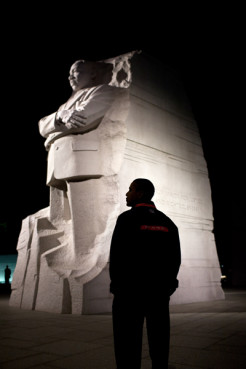 COMMENTARY: A history of discrimination earns President Obama a right to speak

I first learned about President Obama’s comments about racism and the Trayvon Martin case last week when a Facebook friend posted a link with this comment:

“Full text of the American President’s divisive and racist remarks today. He moves smoothly into his new role as race-baiter in chief.”

My friend’s anger was matched by many others from PowerLine to Breitbart. But what I read seems to me as controversial as tomorrow’s sunrise and incendiary as wet newspaper.

Let me try an analogy.

Imagine that Joe Lieberman had been elected our first Jewish president. And that in a moment of crisis, he felt compelled to explain that some reaction to even the hint of anti-Semitism is partly explained by the Jewish cultural memory of the Holocaust. And he included personal anecdotes about growing up Jewish in America.

Would he be accused of being divisive and guilty of whatever the Jewish equivalent of “race-baiting” might be?

Here’s a truth: Non-Jews cannot feel in their hearts the full weight of what it feels like to have classmates toss pennies at their feet. Or know the ambivalence of studying Shakespeare’s “The Merchant of Venice” in school. Or feel the full anger and shame of hearing the end of an anti-Semitic joke.

Here is a small example of an “insider” Jewish sensitivity that would likely never occur to outsiders. Many a modern Jew would bridle at the sentence you are reading right now. Seriously. Because it says “Jew” rather than “Jewish person.” They’d react even though there is nothing remotely anti-Semitic about my sentence or its context.

Many other American groups also have their prisms of understanding aligned in part by histories of discrimination, some more current than others. And outsiders can’t really know fully what they feel, either.

The Holocaust lasted about a decade and ended with Adolf Hitler’s suicide 68 years ago — and yet the effects remain on how many Jews understand and interpret current events.

By comparison, slavery of blacks in North America lasted almost 250 years. Institutionalized, culturally approved, legal discrimination lasted about a century more through Jim Crow laws. And high-profile examples of unambiguous racism have made it periodically into the headlines for years thereafter.

The Board of Education of Topeka, Kan.; David Duke and Rodney King are hardly ancient history to many African-Americans. As William Faulkner wrote (and Obama has borrowed in discussing racism): “The past is never dead. It’s not even past.”

A  years-old quote by columnist Thomas Sowell, who is black, has resurfaced: “I see racism as not dead, but on life support.” And perhaps that is true for Sowell. But plenty of other black Americans have their own tales of disagreement. Including the president of the United States.

Many of the circumstances surrounding Trayvon Martin’s death are at best ambiguous. But this much seems beyond argument: An armed adult amateur would-be crime fighter confronted an unarmed black teenager who was doing nothing visibly wrong. A fight started. Moments later, the teenager was shot to death. And George Zimmerman, the man with the gun, was acquitted, based on a defense of self-defense.

What did Obama actually say about this? After polite throat clearing, he refused to criticize anything about the trial, going so far as to say that the jury instruction was properly done. “And once the jury has spoken, that’s how our system works.”

He says that “Trayvon Martin could have been me 35 years ago.” So? His autobiographies make it clear that Obama was no young saint. And photos of Obama from those years look enough like Martin to make the comparison strike home.

Then the president gets to the meat of his commentary: An exploration not of the killing and subsequent trial, but of black reactions: “The African-American community is looking at this issue through a set of experiences and a history that doesn’t go away.”

He tracks through a series of examples of recent personal and institutional racism, including his own experiences. But he also notes that Martin was more likely to have been shot by another young black man than by a white man.

History and context count, however. And that means many black Americans have, he says, “a sense that if a white male teen was involved in the same kind of scenario, that, from top to bottom, both the outcome and the aftermath might have been different.”

Is there anything controversial about any of that? Anything more shocking than a claim that millennia of Christian anti-Semitism and the Holocaust help explain some Jewish reaction to, say, the life sentence meted out to Jonathan Pollard for passing American classified material to Israel?

Obama then offers some suggestions for what he thinks would be constructive next steps to reduce mistrust. Whatever the politics of his suggestions, I don’t see anything racially divisive in any of them.

Which is also, wonderfully and undeniably, true.

Previous Where can you find more balance? The answer may be in the story of Mary and Martha
Next POLL: Should charitable tax donation deductions be limited?