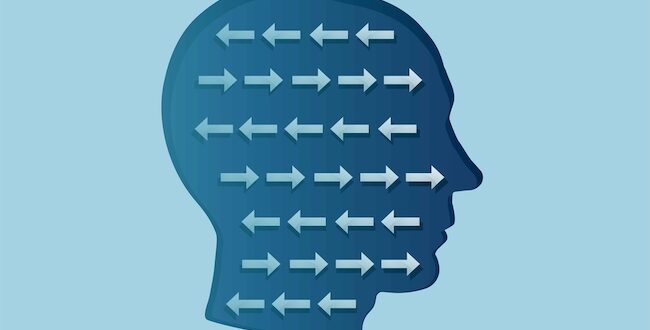 A head with arrows inside going in opposite directions. Cognitive dissonance concept/DepositPhoto

Cognitive Dissonance Within The Church

Growing up, I was a hard-core conservative, raised in a conservative Christian family and a conservative Christian church. I believed in a young earth, 6-day creationism narrative, and held that there were exactly two genders, indistinguishable from one’s anatomy. America is, always has been, and was intended to be a Christian nation. My views began to shift in college, initially due to my first bingeing of “The West Wing,” and by graduation I considered myself a right-leaning independent. And then a left-leaning independent.  And now I’m an openly trans, agender (relating to a person who does not identify themselves as having a particular gender). Christian woman voting for Bernie Sanders — a Jew and the most progressive candidate we’re likely to see on the presidential stage for many years — to lead our fundamentally agnostic nation.

Recently I wrote a Facebook post expressing the struggle of a trans woman trying to cope with family members that subscribe to a traditional interpretation of the Bible. A friend of mine–Elizabeth Backstrom, a writer for SpokaneFāVS who encouraged me to submit this essay for publication–wrote a comment on that post in which she was grappling with her inability to explain how different sects of Christianity say they are certain of completely conflicting viewpoints, and that their views are God’s. Liz increasingly feels that, while she “still [believes] in god, humans really have no understanding of god at all”, and instead create our own individualized gods.

Speaking from my experience, my views have changed on many things–evolution, LGBTQIA+, etc. — for a few reasons.

For evolution, it was that a pastor I highly respect gave me “permission” to believe that Genesis 1 and 2 weren’t to be taken literally. After confessing I was struggling with what I’d learned in my geology course, he told me he believed that, while created by God, life on earth came about through evolution; if he could believe that, then I most certainly could.

For queer issues, it was a number of things. One was the biblical arguments made by Matthew Vines in his YouTube video, “The Gay Debate: The Bible and Homosexuality.”  Knowing that there was an alternative interpretation to scripture that made sense was the first big step, however that left me with two conflicting interpretations, and I was unsure of which was right.

The second was hanging out with a couple Christian lesbian friends several years later who were living out their faith in a meaningful way. If a bad tree cannot bear good fruit, and these lesbians were bearing good fruit, then perhaps there is more to this issue than a plain-text reading of traditional translations of the Bible supplies. Alternatively, if a good tree cannot bear bad fruit, and preaching against homosexuality is causing people harm — in particular, harm to those most oppressed–then maybe the traditional interpretation is not a good tree.  (This was an argument made by Matthew Vines.)

The last was my own self-discovery of my gender. I’m having a hard time articulating it, but essentially, I don’t feel convicted about being who I am.  When I do something wrong, I know I’ve done something wrong (though, I also sometimes feel I’ve done something wrong when I haven’t). There might be pleasure in doing it, but it feels corrupted, joyless. There’s earthy gratification, but also a sense of …  ruin. I don’t have this sense when I think about being transgender. Most of the time I feel nothing about it, just matter of fact, but sometimes I have a sense of divine affirmation. I’m convinced that I was created agender/transgender prior to the effects of “the fall,” though I can’t really explain why. If God created me this way, borne in me the knowledge and innate sense that my gender does not match my genes, and if God does not make mistakes, then how can this be sinful?

A Need To Change

I agree that in all these cases — the two listed, and others — I wanted to change my views. More than that, though, I felt the need to change them, to make sense of the data I’d ingested. The observable data conflicted with my held beliefs, and each time I felt enormous relief when my view shifted.

However there have also been cases where I wanted to change my beliefs, when it would have been convenient to do so, and I found myself cringing — not because of prejudice or conditioning (I don’t think), but because I had the sense, what I would call the Spirit’s influence, that changing those beliefs would be wrong, purporting something sinful to be righteous. One key difference in these cases was that I went searching for data to support what I thought I wanted to believe; I went looking to create an internal conflict because I wanted to justify my behavior, temptations, and failings, rather than finding myself in the midst of conflict due to data that arose organically and would have been much more convenient to ignore. In these cases, I felt that same sense of relief when I decided I couldn’t in good conscience change my beliefs.

Where I changed my beliefs, I felt greater freedom and joy. Where I did not, I felt confidence and renewal.

I imagine many people have had these same experiences but with different outcomes — that is, while some consider whether to accept that it’s not sinful to be gay or trans, they come to the conclusion that it is sinful, maintain their belief, and sense the confidence that I just described. This, like Liz said, I cannot explain unless, like she also said, we create our own gods.

In some cases, I do think God may be telling us different things. For example, I think God may tell one person that it is not OK for them to drink and tell another person that they are free to drink responsibly. In fact, drinking responsibly to one person may very well mean not drinking at all.  In cases like these, this direction applies to individuals or to specific cultures–not to nature itself.

I also know that God is realistic about his commandments and how they would affect the current state of humanity. In Exodus and Leviticus, God through his prophets set down rules for how to treat slaves. In Philemon, God through Paul seems to have disavowed slavery, and indeed throughout the next 2000 years, we’ve seen how disastrous slavery is. I don’t believe God would tell anyone today to make someone their slave and treat them well.  Was this change because God changed his mind? I don’t think so. I think early humanity was going to have slaves with or without God’s direction, and in that case, he wanted the best of the situation that was possible. In 100 years (assuming humanity still exists), I believe treating homosexuality as sinful will feel as foreign to Christians as accepting slavery feels to current Christians. That said, do I think God is currently giving conflicting direction to different members of the Church? I can’t imagine that he is — throughout Scripture I see God leading humanity as a whole in a certain trajectory, not multiple trajectories at once–and I don’t know how to explain the current discord and confusion amongst its members, all claiming to hear God firmly confirming their own beliefs, except to say that this has happened before.

It happens roughly once every 500 years. Last time, it split the Church into Protestants and Catholics. Five hundred years before that, it split the Church into Eastern Orthodox and Roman Catholic. Is that what God intended? I doubt it. Yet now no one is making concerted efforts to convert the Pope to Protestantism, nor do I see catholic people pushing protestants to start praying to Mary. I can’t say for certain, but I don’t think an effort to reunite the two church factions is high on God’s list of priorities. That said, these divisions — the former named the Great Reformation, the latter named the Great Schism – resulted in a “new, more vital form of Christianity,” a revitalized form of the original, and a grand expansion in the church’s aggregate congregation, reaching more people through different interpretations of the Gospel. Likely the current crisis, known as the Great Emergence, will have a similar outcome. I don’t believe God is encouraging this rift by giving conflicting directions, but I do believe he will make use of it. (Phyllis Tickle’s book “The Great Emergence” is an excellent read on the topic, and the source of the previous quote).

All of that said, I will most certainly not claim to know more than the broad strokes of God’s will. Love God and love your neighbor. Live humbly and don’t judge people. Treat foreigners and immigrants as you would native citizens. Do good works and take care of the orphan and the widow.  Preach the Gospel.

Previous Stuck At Home: Not All Bad
Next Coronavirus and the Spiritual Life