Violence and the Sacred was the topic of the February 2013 Coffee Talk.

Coffee Talk: Violence and the Sacred

Violence and the Sacred was the topic of the February 2013 Coffee Talk. Related posts are below. 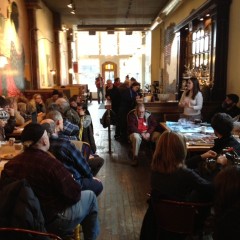 During Spokane Faith & Values February  “Coffee Talk” we discussed the issue of Violence and the Sacred. Read more.

I really enjoyed Saturday morning’s Coffee Talk with the panel and the comments of everyone there.

“God is not motivated by hatred”

A further thought on God and violence. One of the common responses to the belief that God is not violent, especially among those who are not so religious, is that God must be violent because the whole universe is violent. Read more.

“Religion is violent because humans are violent”

Can religion and violence be separated, even in a theoretical sense? Read more.

“Violence and the sacred”

I find it interesting that there is even a question of the use of violence in context with the sacred.