At Couer Coffee, in May 2013, SpokaneFAVS held a Coffee Talk titled "Angry at God."

At Couer Coffee, in May 2013, SpokaneFAVS held a Coffee Talk titled “Angry at God.” Related posts are below. 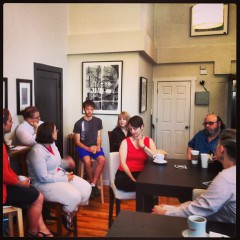 “Reveling in the silence”

Namaste’ readers. After this weekend’s Coffee Talk I discovered I have something to say about silence. Read more.

Picture this: an adolescent girl is visited by a series of people who claim to be God. Read more.

“When God becomes ‘too much'”

My anger with God comes from not being able to escape from God’s presence. Read more.

“Angry, but not with God”

Patriarchy. British Petroleum. Mel Gibson. Drones. I don’t think of myself as getting angry all that often. Read more.

I’ve had some great therapists over the years, and that’s almost reason enough to have endured the things that made me seek out therapy. Read more.

“Angry at God or alienated from God?”

Tragic events like the Boston Marathon bombing rip lives apart. An understandable reaction might be anger at God. Read more.

“Whose fault is the Boston Marathon bombing?”

Is it only the fault of the Tsarnaev brothers, or does the wider society share in the blame? Read more.

Previous “Aladdin Jr.” enchants audiences at the Bing
Next Sheep, goats, the pope, and the image of God