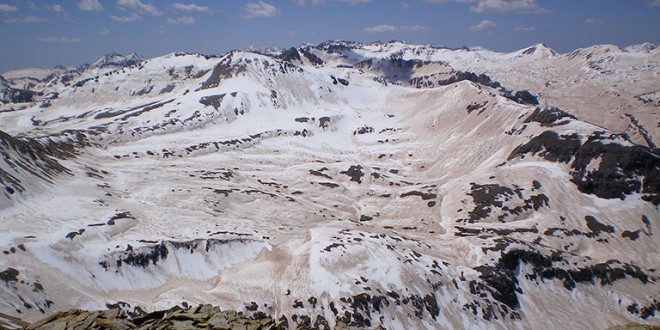 A photograph of the extreme dust deposition from the deserts of the Colorado Plateau onto the Colorado Rockies snowpack in 2009. Taken from the high point of the Senator Beck Basin in the San Juan Mountains, it captures the extent of the impact of darkening in which the snow albedo dropped to about 30%, more than doubling the absorption of sunlight. Credit: S. McKenzie Skiles, Snow Optics Laboratory, NASA/JPL.

Climate Change and its Psychological Impact on Scientists

A recent article published in the August issue of Esquire magazine examines the effects of climate change: not the physical or sociological effects that all humans will experience (some more than others), but the psychological effects on climate scientists themselves.

The article reveals the severity of our environmental situation and what it may mean for our future. Interspersed among very bad forecasts are the very human voices of climatologists as they reflect on their coping methods for studying ‘the end of the world as we know it’. Their mode of investigation requires detachment from their opinions and feelings; this is true for all scientists.  But that does not mean they remain emotionally numb in response to their findings or to political reactions to those findings.

The article reports on this experienced sadness, fear, and anger, sometimes referred to as ‘climate trauma’. It also mentions the depression experienced by many climatologists after the disappointing close of the 2009 Copenhagen Summit. The lack of progress made led a few scientists to disengage and even go off the grid, with others emigrating from the United States to more hopeful environments in the UK and Scandinavia.

The negative backlash to the ‘sad but true’ facts of climate change is maddening to the everyday, environmentally concerned citizen. But the frustration and disillusionment experienced by Sierra Club members and 350.org activists pales in comparison to the despair climatologists must fight on a daily basis.  From lack of political support to death threats, these scientists live the adage that ‘no good deed goes unpunished’. While a healthy dose of skepticism is warranted for any claim, the scorn and personal attacks climatologists have endured over the past few decades is not.

Reading the article, I empathized with the hopelessness that climatologists must keep at bay in order to do their jobs. It also led me to think about the connection between hope for earthly outcomes and Christian hope. Earthly hope is experienced when an outcome is uncertain. Can we slow the destruction of our rainforests? Can we stem the growing human population that has doubled  in my 47-year lifetime? Will we be able to work together to reduce carbon ppm to 350 when we’ve surpassed 400 and show no signs of stopping? I hope for all of these outcomes even though they seem unlikely.

Christian hope, on the other hand, is not for an uncertain outcome; it is for God’s promise that he will redeem and transform creation. Christians have faith in this promise — they are certain it will happen – and hope sustains them until that outcome is realized. “Now faith is confidence in what we hope for and assurance about what we do not see” (Hebrews 11:1).

Hope in this promise of a new creation can sustain us as we work toward undoing — or simply halting —  the abuse humans have wrought on this earth. Faith that goodness will win out in the end can keep us engaged in overcoming our current circumstances. N. T. Wright, in his book “Surprised by Hope,” uses the term ‘collaborative eschatology’ to explain the value of our current actions as we await Christ’s return. It may be that God is giving us an opportunity to bring about necessary changes before this transformation, and these changes may simply be in our selves.  Working for justice transforms us and prepares us for the Kingdom of God. While the amount of work that one person or community can do may seem like a drop in the ocean, it affects our priorities and values, and that ripple affects those around us. One person’s choosing to be vegetarian, for example, does nothing to stem the tide of environmental destruction,  but it changes that person and his relationship to creation.

Hope requires action. Even when there is nothing we can do to bring about a desired outcome, we can still actively stay engaged by praying or imagining ways our hope might be realized. This, in turn, may provide insight as to what action we as average citizens can take to lower the odds that things will turn for the better.

So what does this mean for your average climate scientist, whose thankless job is to discover and inform us how sick our planet is? While there are more ‘Christian’ scientists than we might realize, there are many who do not subscribe to this, or any, religion. If a person without Christian hope is working for justice, how does she stem despair.  And what intermediary role can I play as one with faith in God’s promise?

As I empathized with the scientists featured in the article, I tried to fathom what it would be like to be on the receiving end of such unjustified hate. And then I realized there was something I could do to help scientists deal with this psychological battle: thank them. Let them know I appreciate the work they are doing to give our planet a fighting chance. This may sound simple or trite, but it is an action we can all take toward people fighting for social justice. That physical experience of hopefulness is incredibly powerful; it energizes and nourishes, and it can restore meaning to our everyday lives.

Those working for environmental justice cannot afford to have long lapses of hope; unlike other social causes, this one has an expiration date toward which we are moving exponentially.  Knowing that I and my community can potentially engender a brief flash of hope in those on the front line in turn gives me hope for creation.