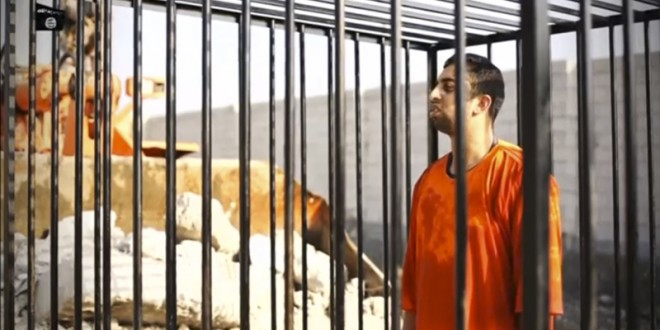 (RNS2-feb4) A man purported to be Islamic State captive Jordanian pilot Muath al-Kasaesbeh is seen standing in a cage in this still image from an undated video filmed from an undisclosed location made available on social media on February 3, 2015. Islamic State militants released the video on Tuesday purporting to show Kasaesbeh being burnt alive, and Jordanian state television said he was murdered a month ago. Reuters could not immediately confirm the video, which showed a man resembling the captive pilot standing in a black cage before being set ablaze. For ue only with RNS-JORDAN-PILOT, transmitted on February 4, 2015, Photo courtesy of REUTERS/Social media via Reuters TV

DUBAI/AMMAN (RNS)  Muslim clerics widely denounced Islamist militants in Syria over the burning to death of a Jordanian pilot, saying such a form of killing was considered an abomination under Islam, no matter the justification.

Egypt’s top Muslim authority, the 1,000-year-old Al-Azhar University revered by Sunni Muslims around the world, issued a statement expressing “deep anger over the lowly terrorist act” by what it called a “Satanic, terrorist” group.

The Grand Sheik of Al-Azhar, Ahmed al-Tayeb, said the killers themselves deserved to be “killed, crucified or to have their limbs amputated.”

In Qatar, the International Association of Muslim Scholars, headed by prominent cleric Youssef al-Qaradawi and linked to the Muslim Brotherhood that has influence across the region, called the burning of Kasaesbeh a criminal act.

“The association asserts that this extremist organization does not represent Islam in any way and its actions always harm Islam,” it said.

The Islamic State posted a religious edict on Twitter, which ruled that it is permissible in Islam to burn an infidel to death.

However, senior clerics across the Islamic world argued that inflicting death by fire was always banned under Islam.

“The Prophet, peace be upon him, advised against burning people with fire,” Sheik Hussein bin Shu’ayb, head of the religious affairs department in southern Yemen, told Reuters in Aden.

Saudi cleric Salman al-Odah wrote on his Twitter account: “Burning is an abominable crime rejected by Islamic law regardless of its causes.”

“It is rejected whether it falls on an individual or a group or a people. Only God tortures by fire,” he added.

Even clerics sympathetic to the jihadist cause said the act of burning a man alive and filming the killing would damage Islamic State, an al Qaeda offshoot which controls wide territory in Syria and Iraq, and is also known as ISIL or ISIS.

“This weakens the popularity of Islamic State because we look at Islam as a religion of mercy and tolerance. Even in the heat of battle, a prisoner of war is given good treatment,” said Abu Sayaf, a Jordanian cleric also known as Mohamed al-Shalabi who spent almost 10 years in Jordanian prisons for militant activity including a plot to attack U.S. troops.

“Even if the Islamic State says Mouath had bombed, and burnt and killed us and we punished him in the way he did to us, we say, OK but why film the video in this shocking way?” he said. “This method has turned society against them.”

SITE, a U.S.-based monitoring service, quoted Abdullah bin Muhammad al-Muhaysini, whom it described as a Saudi jihadi, as saying on Twitter it would have been better if Kasaesbeh’s captors had swapped him for “Muslim captives.” His killing would make ordinary people sympathetic to Kasaesbeh, he said.

Still, some admirers of Islamic State cheered the killing. In a Twitter message, a user called Suhaib said: “To any pilot participating in the crusader coalition against the holy warriors — know that your plane might fall in the next mission. Sleep well!”

The killing was widely denounced in the Arab press. The pan-Arab al-Hayat newspaper published the report on its front page under the headline “Barbarity.”

Saudi Arabia’s Arabic daily al-Riyadh newspaper wrote that the Islamic State had “deepened its savagery and its bloody approach” by burning Kasaesbeh.

“I have never heard of any group that claims to be Muslim and commits such atrocities,” said Shadi Abdel-Wahhab, a 22-year-old university student in Sanaa.