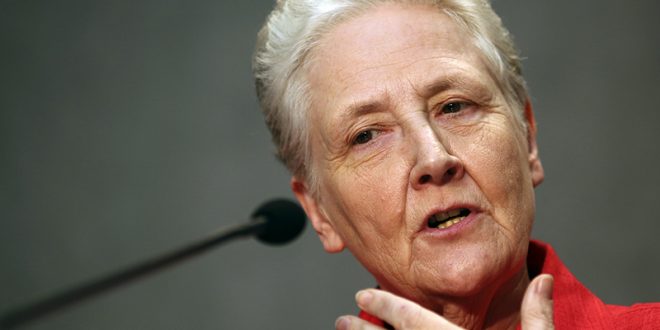 Marie Collins, member of the Pontifical Commission for the Protection of Minors, gestures as she speaks during their briefing at the Holy See press office at the Vatican on May 3, 2014. Photo courtesy of Reuters/Alessandro Bianchi *Editors: This photo may only be republished with RNS-CHURCH-ABUSE, originally transmitted on Sept. 21, 2016.

VATICAN CITY (RNS) The only abuse survivor currently serving on a panel set up by Pope Francis to fight clerical sexual abuse says the Catholic Church is making good progress and welcomed changes initiated by the Vatican and the pontiff.

Marie Collins, who was raped at age 13 by a hospital chaplain in Ireland, is a member of the Pontifical Commission for the Protection of Minors.

“I have complained about slowness and frustration in the past,” Collins told RNS this week. “From my point of view as a survivor, I would like everything to happen tomorrow.”

But, she continued, “We have had some really positive moves.”

Collins, who has said she would quit the panel if she did not see substantive reforms, specifically cited the commission’s participation in an orientation program for new bishops at the Vatican last week.

She also pointed to a papal decree issued in June by Francis and designed to make bishops more accountable for abusers and to mandate their removal if found to be “negligent” — something that had not happened before.

“It (the decree) covers more than the bishops, it covers the religious superiors as well,” she said. “We have abuses in the religious (orders), as well as the dioceses, so it’s a wider reach.”

Francis has also approved a request that each country’s hierarchy should establish a national day of prayer for victims.

The pope also suspended the archbishop of Guam when he was accused of abusing altar boys years ago and sent a Vatican delegate to investigate; the delegate, an archbishop, this week said that the Guam prelate should be permanently removedand that he will be subject to a church trial.

But not everyone is satisfied.

Peter Saunders, a British victim of clerical sexual abuse who had been on the Vatican panel but was sidelined by the commission earlier this year, said this week he was “too outspoken” to be reinstated.

In February the Holy See announced that Saunders, who was abused by Jesuit priests as a teenager, had taken a “leave of absence” from the commission.

Saunders, the only other survivor of clerical sexual abuse appointed to the commission, said he had asked to return to the panel but his request had been rejected.

“I was asked to take a leave of absence,” Saunders told RNS. “I am too outspoken.

“I asked if they would have me back but the answer was ‘no.’ So I’m waiting on written confirmation that they don’t want me back!”

Saunders generated headlines around the world when he criticized Australian Cardinal George Pell in a TV interview for his “lack of sympathy, empathy, or any kind of understanding or concern” for victims of clerical abuse.

He said Pell’s behavior was “almost sociopathic” and demanded the pope dismiss him from his position as the Vatican’s chief financial officer.

At the time Saunders was put on leave, the head of the commission, Boston Cardinal Sean O’Malley, said Saunders had been asked to consider establishing a victim survivor panel to work with the advisory body.

“I have not been dismissed but I told them that I would be prepared to speak to the pope about this and the pope could sack me,” Saunders said Tuesday (Sept. 20). “I am expecting to be dismissed one way or the other.”

But a spokeswoman for the Vatican commission, Emer McCarthy, said Saunders had not been dismissed.

“We will all have to decide the best way to move forward,” she said. “He hasn’t been dismissed. He hasn’t resigned.”

McCarthy confirmed that another panel member, Claudio Papale, an Italian who teaches canon law at the Pontifical University Urbaniana, had resigned in May, though his resignation was for personal reasons.

She said it was up to the pope to accept Papale’s resignation and decide whether he should be replaced.