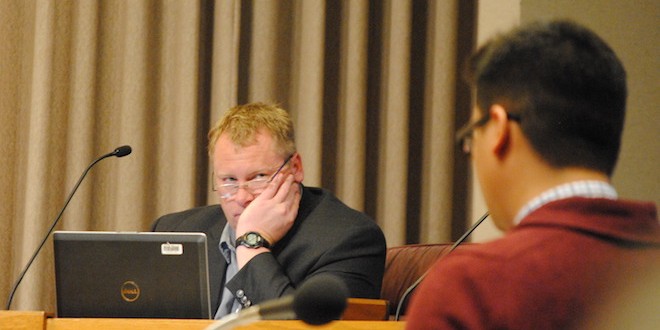 Members of the Spokane City Council spent more than three hours Monday night listening to residents mostly air their opinions about abortion. The ordinance drawing the crowd, which passed 6-1, revised Spokane’s Municipal Code to include driveways in an ordinance about obstructing traffic.

The ordinance states that demonstrators can no longer block any private business driveways and although it applies to all local businesses, the frequent protests at Planned Parenthood are what stirred the lengthy deliberation.

“We’re not having an abortion debate this evening. I’m sorry that’s what the conversation about this has become, but we’re not going to have a discussion on abortion,” said Council President Ben Stuckart,” Really the Supreme Court decided that with Roe V. Wade.”

However members of The Sidewalk Advocates for Life said the ordinance couldn’t be separated from the issue. They said it is a stain on the First Amendment, some adding that with it the Council was “doing the bidding for Planned Parenthood.”

Faith Howard, who stands outside Planned Parenthood for two hours every week, said by working with the Sidewalk Advocates for Life she’s simply offering conversation with those entering the building.

“I invite them to roll down their windows, accept our literature, have a brief conversation with us,” she said. “I don’t believe I’m interfering in anyway with the safety of traffic in that area.”

The advocates said they don’t block the driveway and go through thorough safety training so they know how to demonstrate without posing risk to themselves or others.

Others at the meeting, however, said they’ve seen protestors blocking cars in the driveway.

Nick Frost, who owns a business near Planned Parenthood, said he’s witnessed protestors in the organization’s driveway and applauded the Council for taking a proactive move on the issue.

“It usually takes a very bad thing to happen for a law like this to happen,” he said. “I fully support this. I don’t think it’s taking away any liberties. How can they not get their point across if they’re standing three feet over?”

The Rev. Todd Eklof of the Unitarian Universalist Church of Spokane agreed, noting that blocking traffic in an attempt at free speech is undemocratic.

City Councilman Mike Fagan disagreed. He said the ordinance favored Planned Parenthood and targeted a specific group in an attempt to squelch their free speech.

The other six council members, however, voted in favor of the ordinance.

“Sadly this issue has turned into left versus right, life versus death,” said Councilwoman Karen Stratton. “The greatest thing my Catholic background taught me was be courteous of others, respectful of others and speak my mind….You have the right to protest…Just don’t do it in a driveway.”