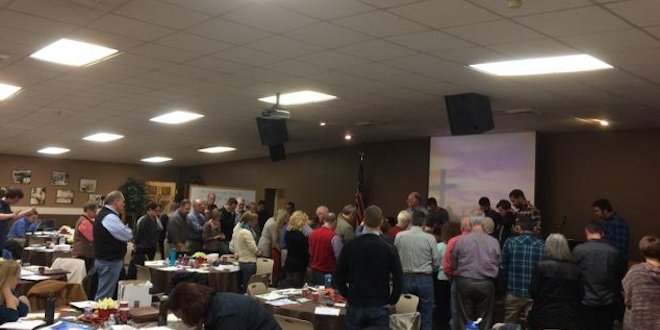 On Jan. 20 Anthony Carollo, executive director of The Greater Spokane Association of Evangelicals hosted an all day event at Union Gospel Mission called “City Advance” facilitated by Tom White of Frontline Ministries. Close to 200 Christian leaders from local nonprofits, businesses and churches gathered for inspiration, instruction, group dialogue, collaboration, worship and prayer.
“Tom White conducts an international ministry catalyzing and developing citywide gospel movements, and teaching on the topics of spiritual formation, unity in the Body of Christ and spiritual warfare. Tom has emerged as a recognized innovator and practitioner in city transformation—building collaborative partnerships among kingdom leaders to more effectively reach their communities,” according to Frontline Ministries.
You can watch a short video that explains the strategy and values of City Advance.
Throughout the day there were various speakers who shared examples of local evangelistic impact and spiritual renewal. Creative ministries and nonprofits were highlighted who are partnering together to address the challenges and opportunities for fruitful ministry in Spokane. I was invited to participate by sharing about a prayer walk initiative I am involved in with local mission-minded leaders. I wrote about it here on FāVS.
In various guided exercise the groups sifted through the various struggles facing the community of Spokane. The group ended up focusing on fatherlessness that those present felt God was primarily focusing on that day. At one point White made a call for those leaders over 40 who felt the direction of God to rededicate themselves to purposefully engaging the emerging generations to come forward for a group prayer. That time of prayer was led by the younger leaders in the room. It was a significant moment of shared concern and commitment that I think will be a mile marker in many people’s lives.
“He will restore the hearts of the fathers to their children and the hearts of the children to their fathers, so that I will not come and smite the land with a curse,”  Malachi 4:6.
I was particularly moved by Jeff Ross’s word about the different streams of believers in Spokane coming together to make a river that leads to a flood of Kingdom good in Spokane. Ross is one of the lead people at Skate Church in Hillyard, held at RIGGZ Indoor Skate Park.
“I will open up rivers for them on the high plateaus. I will give them fountains of water in the valleys. I will fill the desert with pools of water. Rivers fed by springs will flow across the parched ground,” Isaiah 41:18.
It was a unique event that combined information, inspiration and activation and I felt privileged to be included and look forward to where it leads in 2016.

Previous Ask A Mormon: What do Mormons believe happens to us after we die?
Next Sports gambling gets a moral pass from most Americans