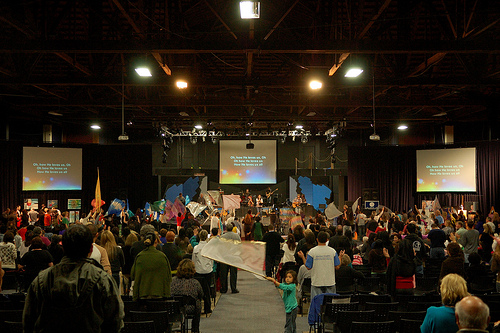 Churches and technology: The good, the bad and the ugly

Before I delve into the topic for the upcoming Coffee Talk, let me point out that I am far from the first, the last or the most qualified person to discuss this subject. (As a case and point, notice that the Rev. Billy Graham gave a TED Talk on the subject of “faith and technology” back in 1998.) Secondly, let me give you a little background on myself — my qualifications and motivations, if you will.

Though I am a Protestant Christian and have been since I was a child, I do not necessarily align with any one denomination. I was baptized in a Nazarene church and went to a Lutheran elementary school and junior high. My high school was a nondenominational Christian institution, and I attended a First Baptist Church for a time before becoming a member of the Southern Baptist Church, where I attended youth group and mission trips. Now, I attend Whitworth University, which is a Presbyterian-affiliated school while I have become an avid church-hopper. My stepfather is on the board of a Cowboy Church and runs a second cowboy church out of his veterinary clinic. My father is non-religious. I am officially a denominational mutt.

Without a specific preference in denomination, I have tried a lot of churches in the Spokane area: Foursquare, nondenominational, Baptist, Southern Baptist, Nazarene, Lutheran, etc. One thing that I have noticed is that different churches have vastly different uses of and aptitudes for technology. Some churches go all-out with a light show during their worship songs, which are played by a full band with top-of-the-line instruments and trained vocalists. Some of these churches even have surveys for smartphone users in the congregation during the sermon. They have flat screen televisions in the lobby and fancy websites. On the other end of the spectrum are churches who exhibit an ineffectively-used PowerPoint projected on the wall or no visual beyond the bulletin during the service with one piano and one off-key vocalist during worship. If they have websites, they might be pretty hard to navigate or just visually unappealing.

Now, I see nothing fundamentally wrong with either end of this spectrum; not all churches have the resources available to effectively or impressively use technology nor do all churches desire to do so. The issue that comes up with the ever-changing beast that is technology is not how it is used, but why it is used. Some of the churches that I have attended seem determined to use technology to impress their congregations rather than to assist their worship and fellowship experiences. Others are dying out, because they refuse to adapt enough to changing times to appeal to visitors. A blogger and worship pastor named Kristian Ponsford has written at length about performance and worship and calls for “a healthy tension” between them. Like most things, the use of technology in worship as well as in all areas of church life is all about balance.

Though I think that churches should use technology — to draw in and relate to their congregations and to help them have the best possible church experiences — I struggle with the idea to which many churches subscribe that bigger and more impressive is always better. In some part, this idea buys into the secular idea of consumerism. Technology, if seen as an end instead of as a means, is essentially worshipping at the altar of materialism.

I sometimes have to wonder if some of these high-tech places of worship and mega-churches remember 1 John 2:15-17, where Jesus says, “Do not love the world or the things in the world. If anyone loves the world, the love of the Father is not in him. For all that is in the world—the desires of the flesh and the desires of the eyes and pride in possessions—is not from the Father but is from the world. And the world is passing away along with its desires, but whoever does the will of God abides forever” (ESV).

I do not want to judge any churches or styles of worship or church use of money — for some people, technology could be the perfect lens through which they see Christ at work in the world, and after all, without advances in technology, organizations like Compassion International or International Justice Mission would not be so effective in helping those in need around the world — but I do think that churches as well as individuals of faith need to be aware of their technology consumption to make sure that it does not become an addiction, a distraction from God and ultimately, an idol.

Join us for our next Coffee Talk at 10 a.m., March 1 for a discussion on “Faith & Technology” at Indaba Coffee. Camarillo is a panelist.

Camarillo has a passion for photography and writing, especially poetry, and is interested in creative counseling methods like narrative therapy and using horses in therapy. Someday, she would like to be a counselor and a published poet. Her favorite poems are “The Singing Woman from the Wood’s Edge” by Edna St. Vincent Millay and “The Art of Drowning” by Billy Collins.

Previous BRIEF: Immaculate Heart to hold Day of Prayer on Ash Wednesday
Next Playing more in my faith journey