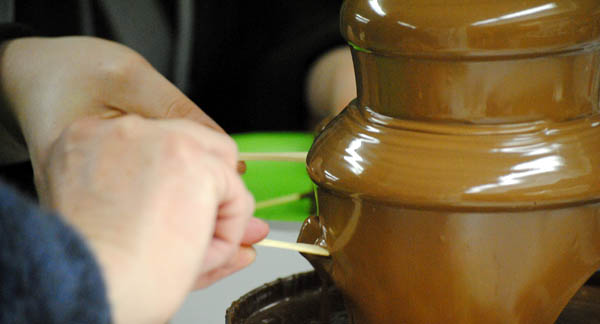 CHENEY — It was wall-to-wall chocolate at Emmanuel Lutheran Church of Cheney on Tuesday night as the congregation and community came together for its annual Mardi Gras celebration.

Traditionally, many churches celebrate Fat Tuesday (also known as Shrove Tuesday) with a pancake dinner as a way to use up rich foods such as eggs, milk, and sugar, before the fasting season of Lent, explained church member Jane Ophus.

Four years ago, however, the church decided to start a new tradition. The Chocolate Festival originally started as a fall fundraiser for Lutherhaven Ministries.  Three years ago it became a Fat Tuesday fundraiser for the church’s Vacation Bible School.

Organizer Lenore LamBeau described it as a “night of chocolate decadence and gluttony” before Lent begins — a night that successfully raises enough money for VBS.

“I find it very meaningful, and this case very fun,” she said.

The nearby community seems to agree.

Upwards of 100 people attend the festival each year, which includes chocolate cookies, brownies, candy, a chocolate fountain and other chocolaty treats.

“Who doesn’t like chocolate?,” said Jen Hamilton, who came up with the festival idea.

Members of the church provide the goodies, and each year there seems to be plenty of dessert left over.

Are you giving up something? Let us know in the comment section below.