Home / News / Christopher Yuan, author of “Holy Sexuality and the Gospel,” Comes to Spokane for Path of Life Fall Event 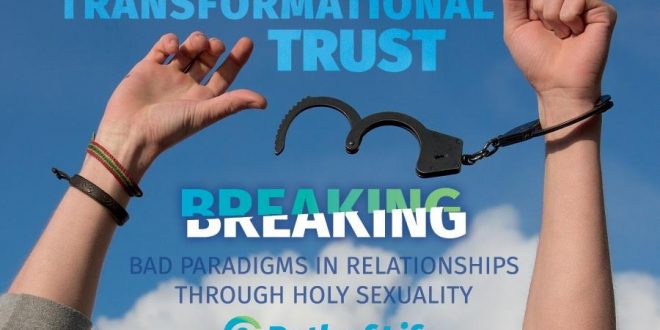 Christopher Yuan, author of “Holy Sexuality and the Gospel,” Comes to Spokane for Path of Life Fall Event

Christopher Yuan was not always a Christian. For many years, he lived as an agnostic gay man. He even ran an interstate illegal drug business out of his apartment that eventually landed him in jail, which was a big catalyst for his faith in God.

He wrote his story, alongside his mother, Angela Yuan, who also wrote about her journey to faith, in their memoir, “Out of a Far Country: A Gay Son’s Journey to God. A Broken Mother’s Search for Hope.”

He will share this testimony and the circumstances in his life that led him to his belief in Jesus Christ at Path of Life’s 4th Annual Fall Banquet and Fundraiser, Thursday, Sept.12, from 6:30-8:30 p.m., in the LENS room on the third floor of the Downtown library.

He will also share insights from his latest book, “Holy Sexuality and the Gospel: Sex, Desire, and Relationships Shaped by God’s Grand Story,” and will speak about how evangelical Christians can do a better job engaging on this topic and sharing Christ to those in the LGBTQ+ community.

“Ultimately, even though I speak specifically on sexuality, it comes down to preaching the gospel,” said Yuan, who has a doctorate in ministry and is a Bible professor at Moody Bible Institute in Chicago. “We’re all sinners and in need of Christ.”

Sheri Olsen, the executive director of Path of Life, which is a Christian sexual health and relational wholeness ministry, was thrilled when Yuan accepted to speak at their event.

“As I read through Holy Sexuality, I felt like he addressed many of our concerns as far as sexual health and relational wholeness,” said Olsen. She was impressed by how Yuan addressed the big picture when it comes to sexual and relationship holiness.

He wrote in his book that “holy sexuality consists of two paths: chastity in singleness and faithfulness in marriage” (p. 47) and that “God declares that only sex between a husband and a wife in marriage is good” (p. 45).

Path of Life accepts these definitions as true, and yet, they are not something the staff and the volunteers force onto the public. According to Olsen, theirs is a ministry with an open door and a welcome invitation for anyone who wants to walk in and find out if their needs can be helped through them.

Path of Life mainly works with people experiencing unplanned pregnancies, people with post-abortion issues, or people who are struggling with same-sex attraction or gender identity concerns.

The Controversy Surrounding Path of Life

While the event is nearly sold out, not everyone in Spokane sees this ministry and the writings of Christopher Yuan as helpful to the LGBTQ+ community.

Jan Shannon is a gay Christian pastor who affirms those in the LGBTQ+ community in what she believes are their God-given sexual and gender identities.

She was the assistant pastor at the open and affirming Westminster Congregational United Church of Christ for several years, and because of that work and other experiences, she believes Path of Life is harmful to the LGBTQ+ community.

“If nothing else, it’s a waste of resources,” said Shannon, who does see value in their post-abortive care ministry, as long as they don’t shame. “When it comes down to this particular issue, whether or not it’s a sin to be gay and what to do about it, honest to God, we’ve got bigger problems.”

Shannon, who is currently studying for her masters of divinity at Iliff School of Theology out of Denver thinks more time, energy, and ink should be spent on issues about caring for the poor and needy rather than her sex life or the sex lives of others.

“Maybe we can just quit talking about it,” said Shannon. “Maybe we could just go on and talk about something way more important. Like the fact we have homeless people dying in the streets every night. That there are thousands of unaccompanied minors being held on our southern border. Because what me and my girlfriend do at night on our own really doesn’t affect the greater community.”

Still, writers like Yuan, as well as ministries like Path of Life, believe that God does care about sexuality, as well as caring for the poor and needy.

“When we commit sexual sins, we are sinning with the body, and the body is a temple of the Holy Spirit,” said Yuan. “And that’s why sexual sins are so important. It’s really a lie. It’s buying into the world of ‘the lie of choice’ that we can choose what we want to do with our bodies. It’s actually not true.”

Yuan adds that he sees the Bible as his authority and believes it to be infallible, inerrant, and inspired by God.

Shannon sees the Bible through a different lens, that while the books known as the Bible today are inspired, man and his fallibility still had a part in the writing and translation of it.

“That’s absolutely the foundation of this whole conversation especially when we talk about people like Christopher Yuan, right, because it’s what you believe about the book we call the Bible—the books we call the Bible—it definitely comes down to that,” said Shannon.

The Work at Path of Life

Olsen relayed a story of an individual who walked into their ministry and according to her, said to them, “’I’ve lived the gay lifestyle for the last 11 years. This isn’t working. Help me.’”

Olsen explained that they minister to each individual, and it’s not a cookie-cutter approach.

“It’s not a jump in and run to them with Bible in hand and a workbook and let’s work you through this because we can make big changes in the next eight weeks,” she said.

Instead, they take as long as it’s needed to get to know someone and visit with them to learn their greatest need. For the individual above who was struggling with same-sex attraction, it happened to be grief counseling, which they then walked the individual through.

The same goes for their approach with pregnancy and abortion issues people are experiencing.

For example, in the case of post-abortive care, Olsen and those who are trained to minister, will first ask, “Is the individual struggling with a loss of motherhood, loss of a child, loss of perhaps a relationship like with the baby’s father, loss of hopes and dreams?” said Olsen. Then they will minister to that specific need.

As for their unplanned pregnancy care, they endeavor to present five choices to those who come for help in making a decision because one of their mottos is “a well-informed decision is a good decision.”

“Are we pro-life? Yes, we are,” said Olsen. However, she added, “Pro-life needs to extend beyond just trying to save the baby, which saving the baby is important to us, but also it’s extending to care of the woman or perhaps the young man as well.”

While there isn’t much time left, there are a handful of tickets still available. They are $25 each and can be purchased through Path of Life’s website.

Yuan is grateful his ministry is able to come alongside Path of Life. He likes their approach in working with individuals from all walks of life who have a variety of needs.

“We all need God’s daily grace to live holy lives,” said Yuan. “So, I appreciate that Path of Life is a place where really anyone could come with whatever they’re wrestling with and their desire to know God more.”

Read a brief Q&A with Yuan.