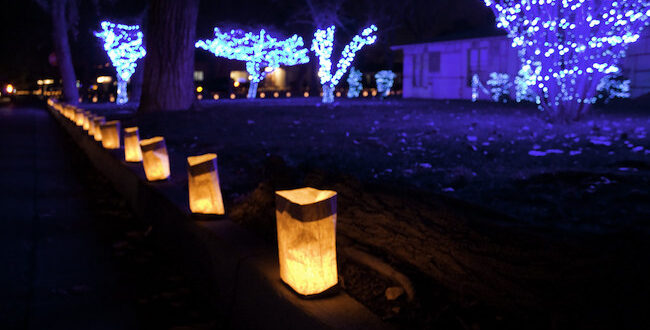 Christmas Spirit isn’t about things, it’s about memories and kindness

Christmas Spirit isn’t about things, it’s about memories and kindness

The other night on a Zoom happy hour, which has become a weekly tradition with some friends throughout the pandemic, someone noticed the sparse room behind me and asked where my Christmas decorations were.

I don’t decorate for Christmas, I said. I don’t own any ugly Christmas sweaters. And I don’t bake holiday cookies.

Four boxes of holiday stuff are stored in my closet. My grandma left them to me when she died and even though I don’t open the boxes, I can’t bear the thought of getting rid of them.

I have fond memories of Christmastime as a child, so I don’t know why I’m such a Grinch.

My mom and I would put up a plastic tree and decorate it while listening to our favorite Christmas CDs. On Christmas Eve we’d light luminarias up and down our walkway. We’d go to her best friend’s house and have a cookie decorating party. (I mostly just ate frosting.) At my grandma’s, I’d set up her porcelain Christmas village and eat more cookies.

The village is what’s in the boxes.

All my aunts and uncles and cousins would come together on Christmas Eve to open presents and feast on ham and roast beef and, because we lived in New Mexico, pozole and enchiladas.

Somewhere between childhood and now, though, I lost the Christmas spirit.

Maybe it’s because everything changed.

Over time the family stopped getting together to celebrate. Today, no one really talks to each other. Several of us moved away. Some people died. I stopped eating meat. Luminarias became electric (sacrilegious, if you ask a New Mexican).

I’m sure faded memories of happy Christmases are familiar to many.

Perhaps that’s why I keep my grandma’s Christmas village safe in its boxes. I’d like to think the sounds of my family laughing, the silverware clinking, the wrapping paper ripping, is packed in there, too, and if I open them, they’ll escape.

Wrestling With the Story of Christmas

The truth, though, is that I’ve always wrestled with Christmas.

My mom used to wear a pin that read, “Jesus is the reason for the season,” and I was taught never to abbreviate it to “Xmas” because it was wrong to cross out Christ.

But if Jesus was the reason for the season, why was Target selling Rudolph lawn figures and Santa ornaments the day after Halloween? The rest of the world seemed to the think it was a time to buy stuff.

Then as I began to study and write about religion, I began to question my mom’s pin and started overthinking Christmas. I no longer think Jesus was born in December, and surely he didn’t look like the white baby in my mom’s Nativity. I’m not so sure the Three Wise Men (there were probably more than three) followed a miraculous star to baby Jesus. The Virgin Birth story isn’t unique to Christianity.

Was all that a reason to be so bah-humbug? No.

The Meaning of Christmas

I was reminded recently by a SpokaneFāVS writer that, “The intended purpose (of the Christmas story) is to reveal truths to us regarding our existence in relation to other humans and to God,” such as all mythological narratives in the Bible.

So maybe Christmas isn’t about the literal story of Jesus’ birth, or about giving presents, or having a big family meal together, though they all tie together. The Christmas Spirit, I realize, is about being joyful, charitable, generous, kind and forgiving.

What a great way to end the year, especially 2020. I still don’t have the Christmas village out but have a new mindset. My goal in the New Year is to hold the Christmas Spirit with me always.

Previous Christmas 2020: I Heard The Bells on Christmas Day
Next Who Was Baha’u’llah, and Why it Matters