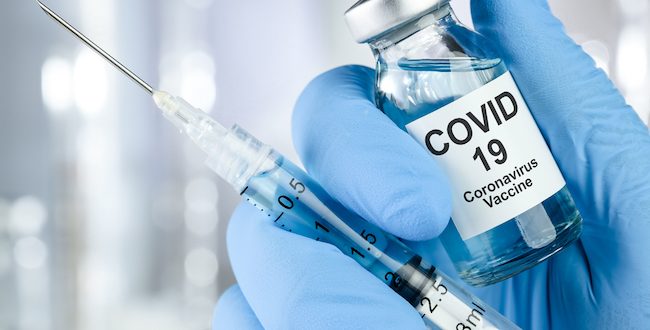 In mid-January, promises of a vaccine against COVID-19 were slowly diffusing across the country. But at that time, the promise was more of a far-off hope than an impending reality — the first doses would go to those on the front lines of the pandemic.

Rev. Katy Shedlock assumed her turn for the shot was a long way off. Though she co-pastors two Spokane congregations — Highland Park United Methodist and Creator’s Table at West Central Abbey – religious leaders weren’t included in Washington’s Phase 1 of vaccine distribution, and she thought she’d have to wait until the summer at earliest.

So when she received a call from her healthcare provider saying there was a dose with her name on it, Shedlock jumped at the chance to get herself and her husband vaccinated.

Shedlock’s local health clinic had extra doses of the COVID vaccine on hand after vaccinating their high-priority patients. When she got a robocall informing her she was now eligible for the shot, Shedlock looked at her husband in disbelief.

“We thought, ‘there’s no way that’s real, right?’” Shedlock said. “But they said they needed to get rid of those doses before they went bad, so obviously I was completely gung-ho.”

Shedlock had been keeping up with news on the vaccine’s development for months and felt “completely secure” in the science and safety of the shot by the time she received it. The process was essentially painless, she said, and the worst part of the whole ordeal was a mild “woozy feeling” after the first shot — nothing that couldn’t be treated at home with saltines and ginger ale, she said.

As the COVID vaccine becomes more accessible to broad swaths of the population, faith leaders are finding ways to combat vaccine hesitancy, encourage a return to normalcy and reckon with the ways in which the vaccine fits into their faith.

For Shedlock, the choice to get vaccinated was an easy one. The United Methodist Church, in which she’s ordained, has never posed the question of faith versus science, Shedlock said.

And while she’s looking forward to gathering her congregations for worship again once the pandemic is past, Shedlock believes relief of suffering caused by COVID-19 is the more pressing moral issue raised by the vaccine’s rollout.

“I see it as a kind of love and justice thing for the faithful,” Shedlock said. “Jesus was not particularly concerned with people gathering to worship him. I think he spent a lot more of his time healing the sick and trying to help people find a way to the freedom on the other side of pain, so for me as a Christian it is a kind of moral duty to help further that mission in any way I can.”

Methodism has a long tradition of promoting health and wellness among its members and encouraging the faithful to help others maintain their health, Shedlock said, so she doesn’t anticipate a lot of resistance against the vaccine among members of her churches or in the Mainline Protestant community at large.

Among Catholics, the COVID vaccine has been a source of moral turmoil since its widespread release. According to Rev. Kyle Ratuiste, parochial vicar of Our Lady of Lourdes in Spokane  and the Spokane Diocese’s resident bioethicist, that concern stems from the vaccine’s development.

Both the Pfizer and Moderna versions of the vaccine used cell lines derived from abortions that took place in the 1970s and 80s during the testing process, raising concerns among pro-life Catholics about the morality of receiving the vaccine.

“The concern comes from the principle of cooperation of evil, where by default we as Catholics ought not to contribute to an evil deed,” Ratuiste said. “However, there comes a point where our contribution to that deed becomes so slight and so removed that it’s essentially morally insignificant to us.”

When considering the fact that the fetal cells in question were derived decades ago against the high potential for COVID vaccines to help end suffering worldwide, most Catholic leaders have arrived at the conclusion that the vaccines are morally permissible, Ratuiste said.

However, the vaccine developed by Johnson and Johnson is more morally questionable than other options, according to a statement released by the U.S. Conference of Catholic Bishops. While the other two vaccines used fetal-derived cells only in the process of testing effectiveness, the Johnson and Johnson version used similar cells throughout the development, testing and production phases, according to Nebraska Medicine.

That makes the question of cooperation with evil much harder to avoid, leading many Catholic leaders to discourage receiving the Johnson and Johnson shot whenever another choice is available.

Authorities from Pope Francis to the Washington State Catholic Conference have released statements affirming the morality of receiving a COVID vaccine and encouraging Catholics to seek the vaccine in an effort to relieve pain and suffering for humanity at large. However, Ratuiste said Catholics are not morally obligated to receive the COVID vaccine, as with any immunization, since medical decisions are deeply personal matters of choice.

Ratuiste said that while existing vaccines using fetal-derived cell lines are morally permissible at this time, Catholics should continue advocating for research and development of vaccines and other pharmaceuticals that do not include fetal cell lines at all.

“The ongoing use of these abortion-derived cell lines are an ongoing injustice, which ought to be rectified,” Ratuiste said. “However, because of the ubiquity of these kinds of materials, you can’t just flip a switch unless we have a completely moral option, which doesn’t currently exist.”

Dr. Gretchen LaSalle, a family physician with MultiCare in Spokane, specializes in addressing vaccine hesitancy. She’s fielded countless questions about the COVID vaccines specifically since their rollout began this winter.

She emphasized that the COVID vaccines on the market today are completely safe and effective, but most of the worry she’s seen around the shot so far “boils down to fear of the unknown.”

“Hesitancy about COVID-19 vaccines is no different. It is based in fear – fear of new technology, fear of a new timeline for vaccine development, fear that the vaccines were rushed for political or other gain, and more,” LaSalle said. “There’s a reason vaccines have been around for hundreds of years and why the large majority of people continue to vaccinate. Vaccines are safe and have saved countless millions of lives.”

While many religions have teachings affirming the morality and safety of vaccination, LaSalle noted that most religions predate the use of vaccines and therefore much has been left up to interpretation by modern religious scholars, leaving room for confusion among people of faith.

As such, religious leaders have a major role to play in helping their congregations understand why COVID vaccination is so important, LaSalle said.

“They carry the faith of their communities and what they say often matters very much to those in their congregations,” LaSalle said. “The recommendation to vaccinate or not to vaccinate, being one that brings with it life or death consequences, should therefore not be taken lightly.”

Shedlock understands that many people of faith struggle with the idea of getting vaccinated for a wide array of personal, political and ethical reasons. But she also feels passionately that vaccination is the moral and rightful thing to do, and Shedlock wants to help combat hesitancy in any way she can, especially when faith and science are presented as being at odds with one another.

“I know that’s something that a lot of Christians struggle with, and that causes me a lot of sadness because I think it’s a false binary,” Shedlock said. “From a scientific perspective, I of course want to wait until it’s safe again for my community to gather and do the things we do in church, like sing and hug and eat together.”

Your support helps us pay our reporters to cover more local religion news like this. Consider becoming a FāVS Member today!

Riley Haun is a freelance writer and sometimes-barista living in Moscow, Idaho. She graduated from the University in Idaho in 2020, where she wrote for student publications The Argonaut and Blot magazine. She’s also written for The Spokesman-Review, Inland360 and Nspire magazine. Though she isn’t religious herself, she’s fascinated by the ways faith interacts with the world around us, and she loves telling stories she never would have heard otherwise through her work with SpokaneFāVS. When she isn’t writing or slinging coffee, she’s probably baking or cooking with her corgi, Linda.

Previous Ask A Quaker: How are Quakers different than Mennonites?
Next We want to know how your congregation has changed during the COVID-19 pandemic