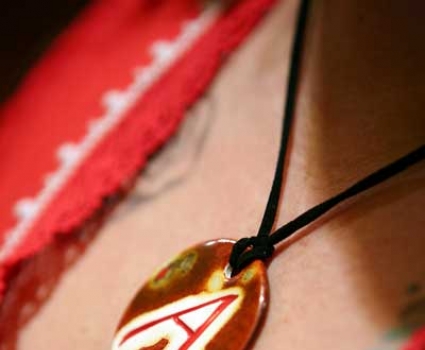 Christians have crosses, Jews have stars and atheists have … what, exactly?

Hester Prynne would be so proud.

The red letter “A” that Nathaniel Hawthorne’s heroine was forced to wear as a badge of shame in the classic novel “The Scarlet Letter” is now proudly chosen by atheists to wear on jewelry made from ceramic, silver, gold and wood.

Christians have their crosses and crucifixes, Jews their Stars of David, Hindus their oms and Buddhists their lotuses. Atheists ask, why shouldn’t they and other nonbelievers have their own symbols as well?

“It is the most recognized symbol in our community right now,” said Amy Roth, a Los Angeles atheist who makes ceramic “A” pendants for her “Surlyramics” jewelry line that she sells at atheist conventions and meetings, as well as online.

“It's nice to have a small amulet of sorts that one can carry with them that represents who they are and makes them feel part of a larger rational community.”

The scarlet A first appeared in 2007 as part of the Richard Dawkins Foundation for Reason and Science’s “Out Campaign,” aimed at getting atheists to be public about their beliefs — or lack thereof. It was designed by Josh Timonen, a multimedia designer, and was originally intended for a T-shirt.

It wasn’t long before enterprising artisans — most of them atheists — started reproducing the symbol on rings, necklaces, pendants and earrings. Many began selling their wares at atheist conventions and meetings and in online outlets.

Atheists are not the only nonbelievers with their own symbols. Humanists have a “happy humanist,” a boxy kind of stick figure with arms raised high. Skeptics have adopted a variety of symbols to denote their rejection of superstition, including an atom, a DNA strand and a tree of life.

Rachelle Wirfs, a 42-year-old artist based in Federal Way, Wash., was frustrated by a lack of attractive jewelry to reflect her belief in humanism, so she made her own of burned and polished wood. In 2011, she began selling her pendants as ArtAfire on Etsy.com.

“Within the last year or two we've seen an explosion of creativity, not only in the number of alternative symbols, but also in the imaginative way that artists are able to express their own interpretation,” she said. “It's all rather exciting. I feel like I'm in good company.”

Many people point to the “evolve fish” as the first widely adopted atheist symbol. That outline of a footed fish with the word “evolve” in the center first appeared in 1992, developed by two Colorado nontheists as a response to the proliferation of so-called “Jesus fish” on car bumpers and license plates.

Now, their company, EvolveFish, employs six people and does $500,000 a year in sales, according to a recent Bloomberg Businessweek article on the “godless market.” They expanded from car decals to include jewelry, and now offer other silver- and gold-toned fish-shaped emblems, including gefilte fish, Darwin fish and the flying spaghetti monster — a mythical creature sited by nontheists as their version of an undetectable, sky-dwelling being.

“I know that many atheists are afraid to come out of the closet and be counted for fear of being ostracized from their families or for fear of losing their jobs and social structure,” Roth said. “So I do my best to stand proud and show the world that it is OK not to believe and that there is a community here waiting for you if you do come out.”

Danny Samuelson, a 26-year-old writer in Orange County, Calif., wears a scarlet A pendant, a gift from his girlfriend, around his neck every day. Just as some Christians wear crosses as a way to start a discussion about faith, he hopes his jewelry will lead to questions, too.

“I am telling people I am willing to discuss this, that this is how I am and you have to accept this,” he said. “I am essentially othering myself to show that normal people with normal lives and problems are atheists.”

Previous BRIEF: Bride of Christ Retreat coming in October
Next On the surface, technology is helping our faith