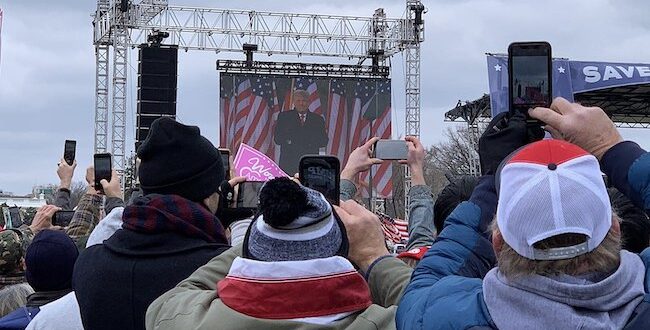 Christian nationalism came into full focus on Jan. 6 when several of its adherents stormed my nation’s Capitol. It was ugly. It was mean-spirited. It was unholy. It was disrespectful. It was the epitome of lawlessness. And it represented anything but the Christianity I have been studying and reading about in my Bible these last 20 years.

What is it exactly? According to the statement by Christians against Christian Nationalism, this movement “seeks to merge Christian and American identities, distorting both the Christian faith and America’s constitutional democracy. Christian nationalism demands Christianity be privileged by the State and implies that to be a good American, one must be Christian. It often overlaps with and provides cover for white supremacy and racial subjugation.”

My eyes fully opened to this truth about me when Donald Trump became the Republican Party’s presidential candidate, even though there was some movement toward recognizing this in myself during the Obama years.

With Trump, though, I just couldn’t believe a man of his character would be the presidential candidate of a political party I believed stood for “Christian” values. I realized then my Christianity should not be wrapped up by my politics, but rather the other way around.

I often say to those who are interested in my musings that “Trump changed my politics.” Doing that, though, he also changed my Christian faith.

I should thank him because it wasn’t until he ascended to our nation’s highest office that I fully realized the unholy alliance of my Christian faith with right-wing politics. Don’t get me wrong, thankfully my boasting and binary statements and beliefs in the past, never radicalized me to the point of so many of those the world saw storming the Capitol on that now infamous first Wednesday of 2021.

Still, I used to think like them that each presidential election was going to be the turning point in our land in which God would either judge or bless our nation.

While my Christian nationalism didn’t result in lawlessness, it did make some of those who knew me not want anything to do with Christianity, at least my version of it.

Today, I have become an outspoken critic of what and where my past trajectory could have taken me: the idolatry of Trumpism and the unchristian face of Christian nationalism.

Part of what kept me in my Christian nationalism was that I was knee deep in a political echo chamber called right-wing media.

Thankfully, through my studies and convictions I began to see something was not right and was actually imbalanced with many of these sources of information.

In addition, through my work as a 2020 summer media analyst for Ad Fontes Media’s “Media Bias Chart” and having recently read Brian Stelter’s “Hoax: Donald Trump, Fox News, and the Dangerous Distortion of Truth,” I see even clearer this unholy alliance between much of the right-wing media and hyper-partisan politics, specifically between Trump and the right-wing media’s peddling of “alternative facts,” as well as just how profitable this corrupt partnership has been for all involved.

More importantly I see how this vortex of misinformation today has seriously impeded my loved ones’ ability to separate truth from fiction, especially amongst my fellow evangelical Christians—much of it in the name of a perverted patriotism and an unbalanced Christianity, i.e. Christian nationalism.

What I am seeing from many of my heavily right-wing partisan Christian brothers and sisters is similar to what Isaiah recorded in his day in Isaiah 59:14—that “justice is driven back, and righteousness stands at a distance; truth has stumbled in the streets, [and] honesty cannot enter.”

Fellow Christian Evangelical and “Never Trumper” David French, who is the senior editor of a conservative news and commentary website, The Dispatch (not all right-leaning media being equal), recently admitted his “aha” moment in coming to terms with the radicalization of this faith with politics, in his post, “Only the Church Can Truly Defeat a Christian Insurrection: It’s time to combat the right’s enabling lies.”

He wrote, “When you’re in your partisan bubble, the enabling lie is seductive. I’ve fallen for it. In years past, I even spread it.” That enabling lie can be summed up as our nation is in a political crisis unless the GOP, or as some have said, God’s Own Party, is the ruling political power in the land.

He then shared a section of an essay he wrote in 2019 in response to his critics about his political stands: “My political opponents are my fellow citizens. When I wore the uniform of my country, I was willing to die for them. Why would I think I’m at war with them now? I disagree with the Left and much of the populist Right, vigorously. If and when any of my political opponents seek to undermine our fundamental freedoms, I’ll be there to pick a legal, political, and cultural fight with them. I won’t yield. I won’t stop. I won’t be weak. But I also won’t turn my back on the truths of scripture. I won’t stop seeking justice, loving mercy, and walking humbly. There is no political “emergency” (or enabling lie) that justifies abandoning classical liberalism, and there will never be a temporal emergency (another enabling lie) that justifies rejecting the eternal truth.”

We can make our nation great again only when we come to the place—all of us, left, right, middle, and every position in between—where we realize we all share in the future of our nation and that we are not one another’s enemy but rather one another’s balance to the extremes of our human natures, Christian and non-Christian alike.

It will be then that the feet of some of my fellow Christians will stop trampling on the truth, resulting in the ungodliness displayed at the Capitol, and instead will become the beautiful feet “of those who bring good news, who proclaim peace, who bring good tidings, who proclaim salvation, who say to Zion, ‘Your God reigns!’” (Isaiah 52:7)

Previous Liars, Traitors, Cowards: Say Their Names
Next Was Earth Deserving of the Year 2020?