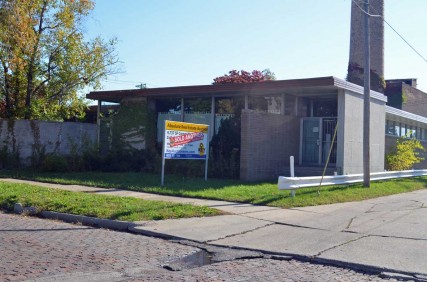 Center for Choice, closed in 2013, was purchased by a group of pro-life organizations with plans to turn the property into a memorial. Photo by David Yonke/Toledo Faith & Values

Center for Choice, the Uptown Toledo facility where 50,000 abortions were performed between 1983 and 2013, was purchased last week (Oct. 7) by Agora, a Christian prayer organization that is working with a group of local pro-life organizations, said Ed Sitter, executive director of Foundation for Life and Greater Toledo Right to Life.

The new owners bought the center at a real estate auction for $61,000 and plan to demolish the building and turn the grounds into a green space with benches and possibly a waterfall or fountain, according to Sitter.

Carol Dunn, the founder of Center for Choice, said razing the building would be “a wasteful use of money.”

“They have no taste,” said Dunn. “It’s a lovely building. The floors in there are terrazzo. And outside, when it was cared for, it was a good-looking building.”

Center for Choice had been the site of numerous protests during the 1980s and ongoing prayer vigils through the decades. A bomb damaged the building in 1986; more than 50 protesters were arrested after forming a blockade outside the clinic’s doors in 1989.

Center for Choice closed last year after it failed to acquire a written transfer agreement with a local full-service hospital as required by Ohio law.

The lone abortion clinic operating in Toledo today may face the same fate. The Capital Care Network has been seeking an administrative variance from the state that would allow it to remain open without a hospital transfer pact.

“I’m terribly disappointed with the women of northwest Ohio who haven’t had the courage to stand up and speak on the issue,” said Dunn. “They are quiet as mice.”

Previous Nobel Peace Prize 2014 Winners (And Not)
Next Father Knows Best: Does God get mad when you sin?

Raze the bloody horror to the ground. Bravo to those who are working to plant something beautiful on the grounds of a such a place of haunting desecration. I pray the souls of those lost there are honored by the gift of peaceful nature.