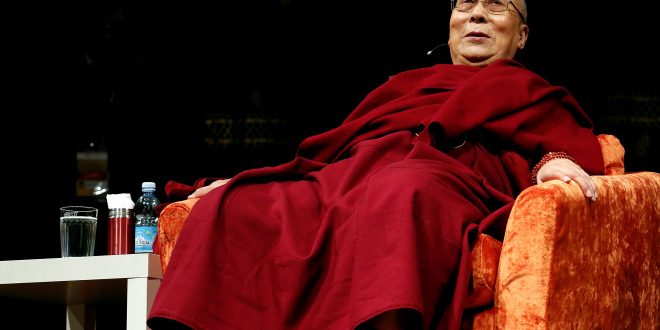 BEIJING (Reuters) – China’s Foreign Ministry called the Dalai Lama a “deceptive actor” on Tuesday, after the exiled Tibetan spiritual leader said in an interview that Chinese hardliners have parts of their brains missing.

Speaking to U.S. comedian John Oliver in India’s northern town of Dharamsala, where the exiled Tibetan government is based, the Dalai Lama cast doubt on his reincarnation by saying he might be the last in line.

“The Dalai Lama’s comments in the interview perhaps appeared humorous and funny, but these words are all lies that do not accord with the facts,” Geng said.

“We often say that the 14th Dalai Lama is a political exile who wears religious clothing to engage in anti-China separatist activities,” he added.

“Now it seems he is an actor, who is very good at performing, and very deceptively.”

China brands the Nobel Peace laureate a dangerous separatist. The Dalai Lama, who fled into exile in India after a failed uprising against Chinese rule in 1959, denies espousing violence and says he only wants genuine autonomy for Tibet.

The animosity between the two sides, and their rivalry for control over Tibetan Buddhism, is at the heart of the debate about reincarnation.

Tibetan Buddhism holds that the soul of a senior lama is reincarnated in the body of a child on his death.

China says the tradition must continue and its officially atheist Communist leaders have the right to approve the Dalai Lama’s successor, as a legacy inherited from China’s emperors.

The Dalai Lama has suggested previously the title could end with him, when he dies. China accuses him of betraying, and being disrespectful of, the Tibetan religion, by saying there might be no future reincarnations.

Tibet’s delegation to the annual meeting of China’s parliament, which opened on Sunday, is likely to hold a news conference some time this week. Such meetings tend to be dominated by the issue of the Dalai Lama.

Previous Faith groups: new immigration order still anti-Muslim, anti-immigrant
Next Question of the Week: Who were the most powerful women in the Bible?