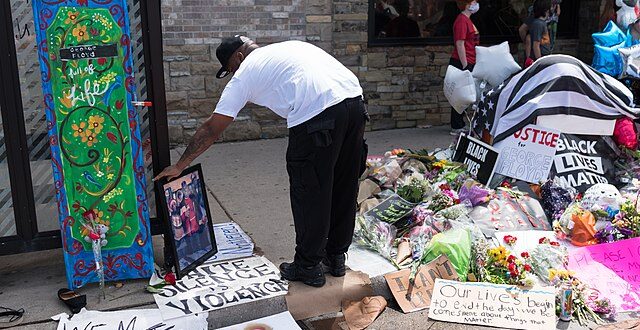 A makeshift memorial near the bus stop where George Floyd was killed, photographed on May 27 Flickr photo by Lorie Shaull - https://www.flickr.com/photos/number7cloud/49943807607/

Chauvin Verdict: We Still Have A Long Way To Go

Chauvin Verdict: We Still Have A Long Way To Go

This is not justice. This is accountability. This is the bare minimum. This is the first step in a very long road to a system reform. George Floyd never should have been killed, especially not by someone who we are told at a young age is a safe person that we can always trust and ask for help, especially when we are scared, or in danger. George Floyd was scared before Derek Chauvin, J. Alexander Kueng, Thomas Lane, and Tou Thao even approached him. He knew he was in danger before he saw any of their faces.

From a young age little black boys are taught how to engage with the police. Keep your hands visible, don’t move suddenly or quickly, say everything you are doing, say “yes sir” and “no sir,” do everything they tell you to do, no matter how unfair and unjustified it may be.

I as a white person, benefit from this system, without even doing anything. I have never for a second thought that the color of my skin would be used as a weapon against me. I have never thought that I would be drug out of my car, put face down on the ground, with someone’s knee on my neck, while I’m left saying “I can’t breathe.” I have never had to think that going to the store, the park or my friend’s house, would result in my serious injury, wrongful arrest, or death.

George Floyd should be home with his family now. His death should have never happened, the young girl who filmed it should have never had to know that she needed to pull out her phone and record this interaction with the police, full well knowing deep down that this was going to end the way that it did.

My Facebook feed is split between shock at the verdict, relief that someone was finally held accountable, and reminders that this is not over. Every time I see another murder at the hands of police, I am reminded of my 8-year-old foster brother and I being stopped on our way home from baseball practice. The cop asked me if I was OK and if my mother knew where I was and who I was with. I remember the fear plastered across my brother’s face as the cop, with his hand on his gun, asked us where we lived and questioned his answer when he said we lived together. It felt like forever to me, and I can only imagine how long the fear made the interaction drag on for my brother. We were eventually put in the car and drove home where the cop spoke to our guardian.

As an adult, I know that interaction could have ended like it did with Tamir Rice and Trayvon Martin, I could have just as easily watched my brother die on the sidewalk when we were just trying to go home for dinner.

I wish I could say I believe this verdict will 100% for certain change the system for the better, but I know the reality of this system. As I write this I see the news headlines saying that yet another kid, Ma’Kiah Bryant, a 15-yearold black girl, was killed by the police in Columbus, Ohio just moments before the guilty verdict was read.

I can hope and pray for a better system, I can share articles, I can show up to protests and wish to say for certain that this will be over soon, but the reality is we still have a long way to go before we stop seeing black and brown bodies in the streets in the name of “public safety.” Knowing this reality, I won’t stop fighting for my friends and community until the system is changed and everyone is equally safe from this corrupt system.

Previous The importance of Earth Day: A Unifying Planet
Next It’s Earth Day, Not Heady Art