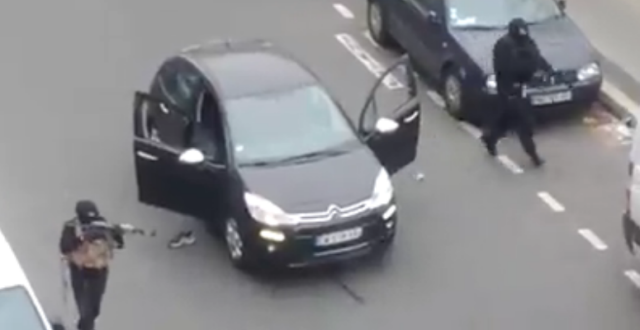 Charlie Hebdo Shootings: “What do you Mean ‘You People?'”

I’m fairly certain everyone in the creative world is blogging, drawing or discussing this event right now, and I hate to be a cliche, but I can’t not talk about this. It’s too monumental, too horrifying not to discuss. By talking about it, it becomes a little less macabre and forbidden, something I can say a little easier each time without wincing, something that no longer seems like the worst thing. It is something with an end in sight. I’m talking, of course, about today’s attack on the Paris offices of the satirical publication Charlie Hebdo, where 12 were killed by masked gunmen who burst into a quiet newspaper office on a Wednesday morning. The dead included the paper’s top editor, police officers and cartoonists. The paper was known for publishing often-provocative cartoons depicting the Prophet Muhammad. I’m not going to go into the details of the story, which can be found near the top of most websites and papers today, but the implications of this particular attack bear discussing.

It’s been a rough year for the world, and this is far from the worst attack on civilians even in the past month. On Dec. 16, approximately 140 students were killed in an attack on a school in Peshawar, Pakistan to name just one. Journalists and aid workers have been killed by the Islamic State throughout the year, as have hundreds of Iraqi civilians and soldiers. Sometimes I feel afraid to wake up and look at my list of news alerts. I’m not sure what the bad news is going to be, and it seems to get worse each week.

I believe what makes this attack different isn’t the calculated brutality, or the shock value. Or even the statement it makes about First Amendment rights and freedom of the press. At first take, it’s easy to think about attacks like these and dismiss them as the work of ‘the other.’ The bad people doing crazy things that we ourselves would never think of doing. The extremes we would never be driven to. But as a wise person (specifically Isaac Slade of The Fray) once said, “never say never.”
It would be really nice if the fascists were The People Out There doing the evil things and we could sit at home and condemn them. I’m not about to deny that the attack on the Charlie Hebdo office was extreme, horrifying and made me sick to read. It affected not only the lives of the individuals in the office but the fragile peace in a country already struggling to balance different faiths and cultures, and often failing.
But how did we arrive in a world with groups like the Islamic State, al-Qaida or even the Nazis in the first place? I believe these groups aren’t created in a vacuum.
They are created by several factors, which have been discussed by people a lot smarter than I am, but one of the reasons they exist, I believe, is because of hate and discord and ill-treatment from other groups. Hate and fear breeds the idea of ‘the other,’ which causes things like economic sanctions and poverty and nationalism. We look at people with suspicion because of their skin or the hats they wear or the books they read. After enough of this, they start to look at us the same way. Bitterness forms on both sides. One side gets violent. The other side reacts with violence. The cycle continues.
There are no easy answers. If I knew the answer to world peace, I would have won Miss America long ago, despite my lack of a really great fake tan.
But I do know this: characterizing folks as ‘the other’ is almost never helpful. It allows us to escape the blame we deserve in the world’s problems, which are not one-dimensional. As Aleksandr Solzhenitsyn said, “If only it were all so simple! If only there were evil people somewhere insidiously committing evil deeds, and it were necessary only to separate them from the rest of us and destroy them. But the line dividing good and evil cuts through the heart of every human being. And who is willing to destroy a piece of his own heart?”
When things like this happen, rather than engaging in armchair condemnation and judgment, why not examine our own hearts and the prejudice and fear we may hold toward others? How can we react to break cycles like this, rather than continuing them? Our current default needs a lot of help, and if we don’t chip in, no one will.