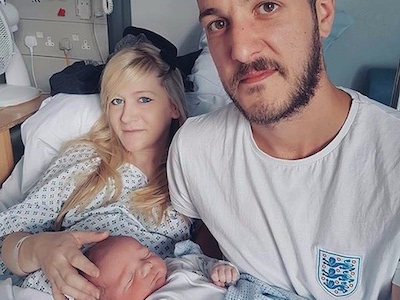 This is an undated hand out photo of Chris Gard and Connie Yates with their son Charlie Gard provided by the family, at Great Ormond Street Hospital, in London. The president of the United States has offered to help. The pope is willing to have the Vatican hospital take him in. Some 1.3 million pounds ($1.68 million) have been raised to help him leave Britain for treatment. But little has changed Tuesday July 4, 2017, for Charlie Gard, a terminally-ill British infant suffering from a rare genetic disease that has left him severely brain damaged. (Family of Charlie Gard via AP)

Charlie Gard’s parents end legal fight to take him to U.S. for treatment

LONDON (USA Today) — A five-month legal battle to get permission to take terminally ill baby Charlie Gard to the United States for experimental treatment ended Monday (July 24) after his parents told a British court they were withdrawing their legal challenge.

Grant Armstrong, a lawyer representing Chris Gard, 32, and Connie Yates, 31, told Britain’s High Court that “time had run out” and that the 11-month-old’s parents had made the decision after the American doctor who offered to treat the baby told them it was too late and wouldn’t work.

The couple cried as Armstrong addressed the court. Yates told the court that she “only wanted to give him a chance of life” and hoped that that his life had not been in vain.

Armstrong said the pair now wanted “to spend the maximum amount of time they have left with Charlie.” The court previously ruled that Gard’s life-support machine should be switched off and that he should be allowed die with “dignity.”

Gard has a rare, incurable genetic disorder and his disease has left him with brain damage and unable to move. He can’t see or hear and needs a ventilator to breathe. His parents, supported by Michio Hirano, a neurology professor at Columbia University Medical Center, and Italian medical researchers, were seeking the legal right to take him to the U.S. to receive an untested therapy they admitted would not save him.

The London hospital where Gard has received all his treatment believed there was no medical evidence to support claims the therapy could work. It also feared it could prolong his suffering. In Britain, disputes between families and doctors over how to treat a patient are decided by courts. In the U.S., the family makes that decision.

But Armstrong said the parents decided to withdraw from the case after Hirano was no longer willing to administer the therapy after he saw the results of a new MRI scan of Gard’s brain. He concluded his brain and muscular damage were too severe.

The case has drawn massive international interest including high-profile interventions from President Trump and Pope Francis in support of the family. Congressional Republicans sought to pass legislation that would give the Gard family U.S. residency and a potential route to treatment there, although it wasn’t not clear whether that would ultimately have enabled them to obviate a British court decision.

In Britain, the case has reignited the debate around right-to-life issues, in particular whether requesting treatment that medical evidence shows won’t work is an absolute moral right to be asserted by family members or whether hospitals and courts are better placed to make decisions about what is in a patient’s best interest.

Over the weekend, the Great Ormond Street Hospital in London revealed its staff had received death threats over the case. “Thousands of abusive messages have been sent to doctors and nurses whose life’s work is to care for sick children. Many of these messages are menacing, including death threats,” the hospital said in a statement.

“Families have been harassed and discomforted while visiting their children, and we have received complaints of unacceptable behavior even within the hospital itself.”

On Monday, a lawyer representing the hospital said that the hearts of everyone at the hospital “go out to Charlie, his mother and father.”