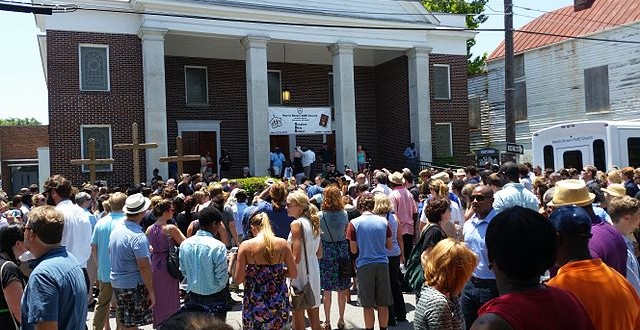 Charleston: One of Us, and All of Us

I am home on maternity leave, caring for a newborn son along with his older brother, age 5. Now the mother of two boys, my initial reactions to learning of the tragedy in Charleston, S.C. was as a mother of sons. The first image that came up on screen when I searched NPR for coverage was that of the suspected shooter, Dylann Roof, looking back at the camera with a scowl. I held my tiny son and wept. What happens between the time when we hold our boys tenderly in our arms, and the time they choose to take up arms for a hateful cause? The question kept clanging in my mind: what are we doing to our sons? And really, what are we doing to our children? What kind of world have we given to them?

I recalled a biblical voice that echoes the same pain that mothers and fathers all over the globe have felt in response to violence and death. This voice was heard in Ramah; it is heard in Charleston. Rachel is weeping for her children and she refuses to be consoled, “for they are no more.” The prophet Jeremiah first describes her cries in chapter 31. She is referenced again in Matthew chapter 2, giving voice to the families of the slain innocents murdered at the hand of cruel King Herod.

Nine people have died in this killing. But 10 are “no more.” Something vitally human has died within the person who committed this crime as well. Weeping abounds.

While my initial reactions to the Charleston tragedy were framed in the context of mothering, I am now beginning to think as a pastor. I have learned through a public statement made by my Presiding Bishop, Elizabeth Eaton of the Evangelical Lutheran Church in America, that the suspected shooter, Dylann Roof, is a member of an ELCA congregation. Additionally, two of the victims, both non-Lutheran clergy, had studied at the Lutheran Theological Southern Seminary. I am an ELCA pastor.

I identify with the remarks my bishop makes: “All of a sudden and for all of us, this is an intensely personal tragedy. One of our own is alleged to have shot and killed two who adopted us as their own.”

Now I think of the flock I gather on Sundays and (try my best to) tend and care for during the week, Salem Lutheran Church. And like a mother regarding her children, I ask, “Can anything I do as a leader in the church inoculate against hatred and violence? Can our rituals or hymns or traditions make a bulwark against racism?” Feeling defensive of Lutheranism I began to wonder, “Who taught this child in confirmation? Who preached the word week after week in such a way that extremism was able to sneak into his worldview?” But all these questions pretend that finding an answer to them could actually root out and pin down evil. In truth, though it is a truth against which I flail with complaint, evil and hatred and violence dwell in every one of us.

No, a ritual can’t create an impenetrable guard that shuts out evil. But it can help a community heal. I find myself longing to engage my tradition. To sing lament hymns, (especially the Advent hymns, crying out for a Savior to Come!) to break bread and pray, to touch the cool water of the baptismal font and ask to yet again be washed. Maybe that’s also the call of parenting. In response to grief, engage. Show up. Show love. Cry and talk and share together. Wash the dishes, and wash your children in stories of compassion and courage. There are no vaccinations against darkness, but there may be practices for health and healing.

What are community practices of healing? I wonder if they might be similar to those of the church and the family: gather, lament, tell the truth, share our stories, do the dishes. Here in Spokane, we need such healing. The biblical Rachel’s weeping voice sounds out here too. Black mothers and fathers have grieved; families of color have feared for their safety. A bomb in a backpack lurked along MLK Day parade route. KKK fliers pepper neighborhoods with fear. We have much work to do.

For the well-being of each other and of ALL our children, let us take up the work of healing.