Church isn't the change agent it once was. It's not transforming neighborhoods or shaping communities anymore, at least not from where Joel Williamson stands. So he's taking it on himself. In October, with the help of three West Central Neighborhood pastors, Williamson, 29, launched The Oak Tree. It's not a church, although the group meets at various church buildings. It's not necessarily a Christian group either, though many participants are Christians. The Oak Tree is, according to Williamson, an activist group that can better Spokane through personal narratives. Christians, Buddhists and even atheists are supporting The Oak Tree.

“The goal” he said, “is to build a community that is large enough, has enough power and is connected enough to their roots and values to shape the community the way we want it to be shaped.”

Sharing personal stories with one another, Williamson said, is The Oak Tree's key ingredient.

“The ultimate mission is that by telling our stories we can knit together a true relational community,” he said. “Knowing what shaped you is important.”

Since January The Oak Tree has launched a workshop series and has held two story gatherings. Until now the workshops have focused on how the economy got to where it is today and the next two workshops will be on what individuals can do to fix it. In March the workshops will focus on food justice issues. The story gatherings are designed so Oak Tree members can understand how each other's values were shaped, discover common threads and find ways to apply those values and improve the Spokane community. Taylor Weech, 22, isn't a churchgoer but considers herself spiritual. She said The Oak Tree is intriguing and plans to become more involved. 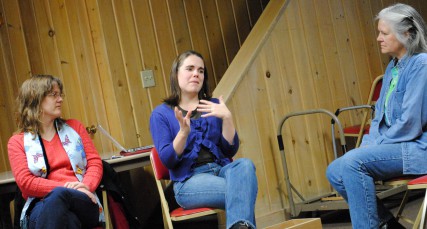 “I can't change anything until I can change myself,” she said. “I can't have compassion toward other people unless I know their story.”

On Sunday evening the Rev. Liv Larson Andrews was the storyteller. She spoke about the struggles she and family members had with body image issues. She spoke about how strong relationships and even pregnancy helped her overcome those battles and how the journey crafted her into the woman she is today. Because of her experiences, she explained, she's outraged by the unrealistic and unhealthy ways women are portrayed in the media.

“I hope we can foster a community that wants to be good to each other in our bodies and promotes the health of our bodies,” she said.

About 20 people attended the story gathering and after Larson Andrews' presentation, discussed how they could relate to her story. Each month The Oak Tree will invite a different storyteller to share their narrative. The next one will be March 11 at Salem Lutheran Church, 1428 W Broadway Ave.

“All of our experiences connect in strange ways,” Williamson said. “I'm constantly affected by other people's stories.”