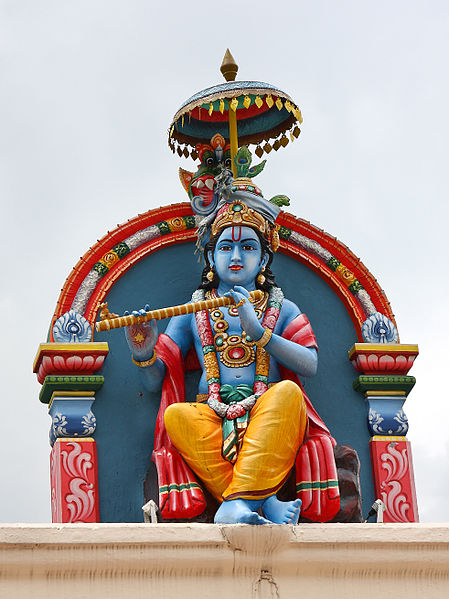 In August, I spent some time in India rejuvenating myself and replenishing my stock of memories of India, my family, traditions, festivals.

I was surrounded by color, love and happiness, along with  tons of delicious food.

While in India, we celebrated the birth of Lord Krishna on Aug. 10, which is called as Janmashtami, which translates into his birth on the eighth day of holy month of Hindu calendar known as Shravan.

Lord Krishna was the child of the king of Mathura, Vasudev and his wife Devaki. They were imprisoned by Kansa, the brother of Queen Devaki as he had his eyes set on the throne of Mathura. By supernatural powers, Kansa was informed that Krishna would be the cause of his death.

Soon after Lord Krishna was born, the gates of the prison opened and Vasudev set on his way to bring the baby to his friend, Nand and Yashoda’s house in Vrindavan. He had to cross the flooded river, Yamuna. But a clear path formed in the middle of the river allowing his voyage, where Shesh Naag (a snake) protected the baby from pouring rain.

Sri Krishna made an indelible impression upon mankind's collective consciousness—re-educating the world about devotion and dharma as well as the ultimate reality.

His life was a model for people in days past, the modern world and surely for those in ages to come. Seeing Krishna as a perfect personification of divinity, to this day, millions of people pray to him, chant his names, meditate on his form and try to put his teachings into practice.

His life has inspired a treasure house of poetry, music, painting, sculpture and other fine arts. His glory is unsurpassable. His story is a source of joy and inspiration for people from all walks of life. One of his most memorable teachings was: Do not worry about the fruits (results), just do your duty.

Krishna's life was so full, it would be impossible to recount it all here. It is told primarily through Srimad Bhagavatam, Garga Samhita, Visnu Purana, Brahmavaivarta Purana, Mahabharata, Harivamsa and several other puranas.