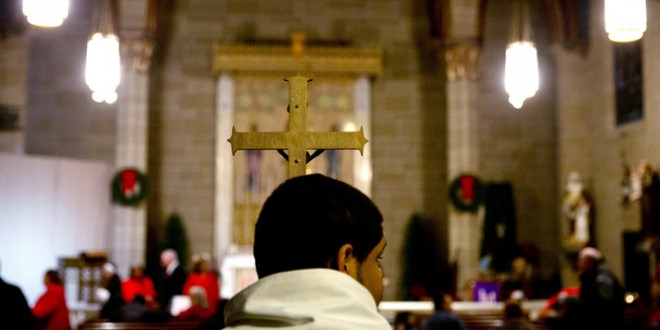 An altar boy holds a cross before leading a procession into the St. Elizabeth of Hungary in New York's Manhattan during a Christmas service for its deaf congregation December 21, 2014. St. Elizabeth, the only Roman Catholic parish dedicated to serving a deaf congregation, is in danger of losing its identity. The Archdiocese of New York has plans to merge St. Elizabeth with a hearing church, part of a sweeping consolidation of congregations that reflects long-term changes in where New Yorkers worship. Members of St. Elizabeth's fear the move means the loss of the special significance of their deaf church. Picture taken December 21, 2014. To match Feature USA-NEWYORK/DEAFCHURCH REUTERS/Mike Segar (UNITED STATESRELIGION - Tags: RELIGION SOCIETY) - RTR4KTRZ

Celebrating Christmas in an age of religious extremism

From the recent attack on Planned Parenthood to the shooting in San Bernardino, extremists of all stripes are revealing the ugly side of religion. The confluence of these events and election season demagoguery is generating fear and outrage.

In the midst of these national struggles, many families are preparing for a more personal religious fight: going to church on Christmas. Americans increasingly don’t identify with a religion, with significant generational differences.

The Pew Research Center reported this year that 35 percent of millennials – those born between 1981 and 1996 – are religious “nones.” Many young people may darken a church door only to placate their parents on Christmas and Easter.

These disparate trends are related to the same phenomenon: cultural change.

The old and the new

Religious extremists want to roll back the clock on modernity to recreate a time when moral choices were simple and Old World values predominated. In contrast, old institutional forms are not resonating with millennials’ postmodern mentality.

Fundamentalists’ reaction to modernity is predictable. They are threatened by individualism, the upending of traditional values and gradual decimation of institutions that have historically maintained moral order. What is novel in the fundamentalists’ response is that they use modern technology to promote their regressive morality.

For the millennial generation, the same technology expands rather than contracts their horizons. As I argue in my book Finding Faith, tradition means little to them. They pick and choose among various options, including the array of religions and forms of spirituality.

The common denominator of fundamentalism and millennial individualism is “over-choice.” For the former, choice is a threat. For the latter, it is an opportunity for self-expression.

A threat from two sides

For many Americans, both cultural trends bring fear.

Homegrown terrorism seems like a greater threat when anyone, in any religious tradition, can be radicalized via the internet. And many grandparents fret over how younger generations will find meaning, morality and even eternal salvation without religion.

As a grandparent myself, I understand this fear, but as a scholar of religion, I’m quite positive about our future. To borrow a phrase from business and economics, mainstream religion is in a period of “creative destruction.“ It may be falling apart, but contemporary culture also offers the opportunity for religion to renew itself.

One needs only to look around at the gray heads in most churches and synagogues to realize that in a generation, these institutions will be nearly empty. Yes, megachurches with hip pastors and contemporary music will continue to draw an audience, but such tribal gatherings and collective rituals can feel shallow and empty. Megachurches, too, are seeing young adults’ interest and regular attendance wane.

Fundamentally, the old Christian cosmology – God sending a son to redeem the world; a God who is all-powerful and yet seemingly impotent in the face of mass violence – simply doesn’t work for many educated young adults. The idea of being “spiritual but not religious” oversimplifies people’s understanding of spirituality, but it also signals the possibility that the human spirit quests for something deeper than the latest technological gadget.

I believe religious institutions are mediators of four fundamental human needs: the need for community, rituals of renewal and hope, self-transcending experiences and deep meaning and purpose in our lives.

When religious institutions no longer mediate these experiences, they collapse and new forms emerge. Initially, these new forms may not look or feel like the old-time religion. They may be filled with combinations of beliefs and practices that alienate the older people who are the custodians of institutional memory. But our current period of creative destruction may be the seedbed from which new forms of religious life will germinate.

For instance, mindfulness, drawn from Eastern religious sources, resonates with many Americans. Increasing numbers of Christians participate in contemplative practices, seeking an experience of God rather than an abstract set of beliefs.

Unfortunately, fundamentalism also succeeds in meeting needs for community, renewal, self-transcendence and meaning. Tech-savvy antimodern fundamentalism – a fascinating and terrifying paradox – will not die anytime soon. Less menacingly, both megachurches and mindfulness can offer therapeutic gatherings of like-minded people that is reassuring in this time of fear and cultural flux.

A volunteer tutors a homeless girl. Could such work replace religion?
Lucy Nicholson/REUTERS

At the same time, both religious “nones” and members of existing religious institutions are experimenting with new forms of spiritual practice and intentional communities. They’re feeding the homeless, gathering in laundromats to offer free laundry service to the working poor and pushing the boundaries that traditionally define religious denominations. Through movements like #blacklivesmatter, they’re creating rituals that critique injustices and heal society and themselves.

This willingness to experiment with religious beliefs and forms previously birthed the Catholic Worker movement, contemporary monastic orders modeled after those in early modern Europe and renewal movements in all faith traditions. Religious institutions can seem unchanging during the span of a human life, but over centuries or millennia, they are evolving.

It will take time for our collective religious impulses to settle into new forms. In the meantime, there may be some fretful grandparents who fear for the salvation of their progeny.

For my part, I will be taking my grandchildren to church this Christmas. I want them to be exposed to a minor dose of mystery and awe, as well as a good narrative about hope embodied in human form.

Donald E Miller, Firestone Professor of Religion and Executive Director of the USC Center for Religion and Civic Culture, University of Southern California

Previous Franklin Graham takes stand in support of Trump’s moratorium on Muslim immigration
Next Solstice celebrations kick off tonight, the darkest night of the year

Spokane FāVS is publishing a series of columns on the subject of prayer.