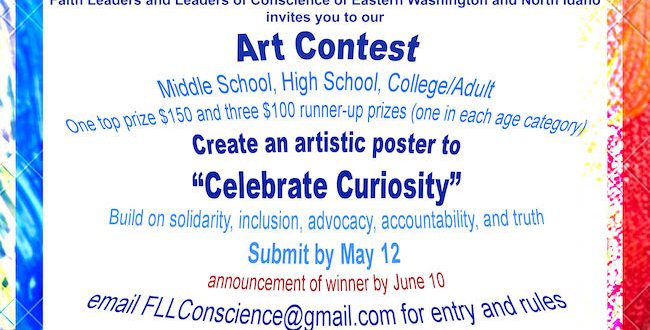 Faith Leaders and Leaders of Conscience has created an art contest in response to the violence against Temple Beth Shalom, the murders of the Asian women and their coworkers in Georgia, and the shoppers in Colorado.

“We were looking for something in addition to vigils, statements, and legislation that would reach into the hearts of our communities,” said the Rev. Gen Heywood, convener of FLLC. “Our art contest is part of that plan. This is more than a one time event as we need many ways to experience our shared humanity. “

The contest will be followed by a short story contest and, later, a photojournalistic contest.

For this art contest, judges are looking for a singular graphic, color image that can be put in the windows of businesses and homes, on social media, on signs, merchandise, and other media to share the message that we “Celebrate Curiosity.”

Contestants are asked to create “A well-crafted image that will convey a visual expression of the people of Eastern Washington and North Idaho’s commitment to Celebrate Curiosity through solidarity, inclusion, advocacy, accountability, and truth. It is a bold statement that all people, all religious and non-religious people, all those whose ancestors were the first on these lands and those new here, all genders, skin tones, sexual identities, and differing abilities are connected, respected, supported, and valued.”

Submissions are due May 12

Email FLLConscience@gmail.com for more information on how to enter the contest.

Previous Ask An Eastern Orthodox Christian: Will God Forgive the Blasphemy of the Holy Spirit?
Next Everyday Is Mother’s Day: A Jewish Perspective